I have an exhibition as part of the E17 Art Trail this year, in Woodstreet library, Watham forest, E17 of the title.The Art Trail is running from September 2nd till Sunday 10th.There is quite a lot of space and I will show a range of my work entitled Symbols of Life , paintings, drawings, photographs and painted objects, all drawing on the natural world, ecology, and the inner world of symbolism, myth and spirituality.

I am quite excited about this possibility, it's always good to get a body of work together and to see the coherence in the work. This is particularly important for me because my work is not stylistically very similar. It's about my wanting to be free to present what I see in the way that strikes me at that point in time I think. Responding in that moment to what is both external and internal. I used to worry that it made my work not commercial for the usual gallery set up, but I don't worry so much now, in that I have accepted that my work probably won't be taken up by a traditional gallery anyway! So it's about finding other ways to get my work seen.

I've just had some of my SLR camera films back, a few pictures to show here. These are a couple from Brick Lane. 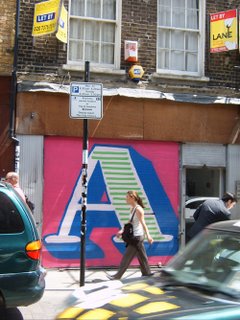 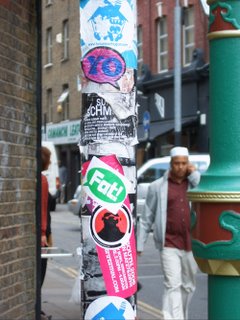 Posted by Padmayogini - Wendy Le Ber at 3:22 pm No comments:

Another lovely flower show that I've been able to go to this year, I hadn't been to Hampton court before, but it's on my list to see the actual palace now. More shopping space than Chelsea! Some really nice water fountains made from columns of rock, glass lights and decorations in all sorts of shapes and colours. You can also buy plants from there, which meant buying one of those collapsible crates on wheels to put them in.

The train back to Waterloo was filled with plants as well as people and made me think about having a cariage like a garden on the train or tube. That would make the journey to work a bit different.

I was taking photos, a couple here, I have plans to use the photos I took at Chelsea and here in some way later. 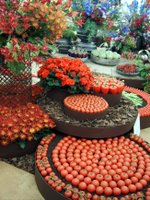 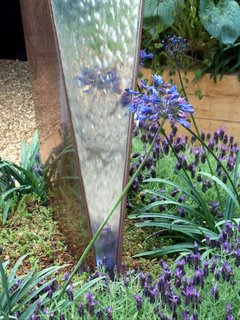 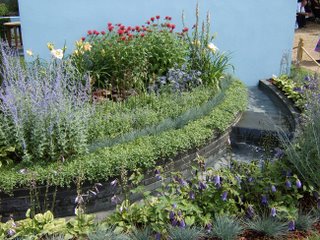 Sitting in the garden the other day I was admiring the dark purple Morning Glory, and got out my pastels and watercolours to do some sketches. The sky was darkening over and the cloud formations changing every minute, I quickly dashed off a couple of watercolours of the sky as well. It's a good practise in just getting something down without thinking too much. 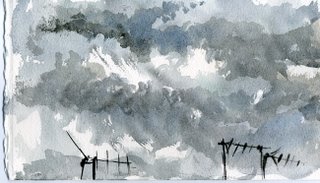 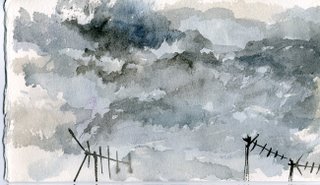 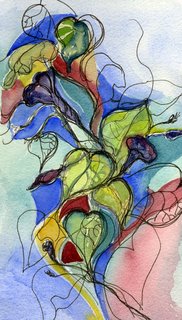 I've just got the leaflets back from the printers for the two urban arts retreats that I'm leading with Clare in the Autumn, getting the publicity out will be ongoing now for a couple of months, I'm thinking about the theme on the nature of perception, that we have for the December retreat and reading Dharma Art by Chogyam Trungpa
Posted by Padmayogini - Wendy Le Ber at 4:50 pm 1 comment:

I was lucky enough to see the Michelangelo drawings on the last day, thanks to the kindness of a friend. The exhibition was packed as they tend to be these days, these drawings spanned Michelangelo's life and as I went round I was stuck by one aspect of his work, what seemed to be his striving to depict the spiritual, and what that did for his way of working.

There were some of his early male nudes, strong, active chalk and pencil marks,a facination with the body and it's movements. The amazing twists that Michelangelo puts the body in and the confidence of his mark making evoked an active energetic response from me.

Along side these types of drawings were some portraits, sensitive and much softer, and a number of religious studies that were less defined anatomically. The much later drawings of the crucifiction of Christ, including the final ones that Michelangelo made, were so different from his early male nudes that I might not have thought of them as being Michelangelos at all.

This is what made me start wondering about whether Michelangelo was seeking another way to depict the spiritual, the Divine in humankind. There are probably books already written on this matter, but I haven't seen them, nor am I particularly well up on knowledge about Michelangelo.

The problem I had with these Crucifixion drawings even though they were described as devotional drawings, was that I didn't think that Michelangelo had found as equally strong and vital way of working as he had for his human subjects. So was I criticising the great Michelangelo? I thought to myself. I suppose I was interested in just how difficult it is to try to depict the heavenly or Enlightened, as I in my much more limited way have been finding out.

It actually was quite moving to see the struggle in these final drawings and wonder what was going on in Michelangelo's mind at this time when he was nearing death.

Work in progress
I am still working on my Zodiac series of paintings, and trying to find a venue for the E17 Art Trail in September. I've had a few of my photographs blown up to poster size and that is quite exciting, seeing them much larger than usual. I'm hoping to get a show of them somewhere.
Posted by Padmayogini - Wendy Le Ber at 1:53 pm No comments: