Day out to Arundel 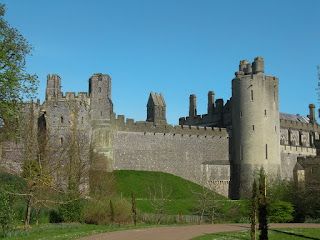 Ruth and I went out to Arundel for my birthday It was lovely weather, blue skies and sunshine and I had my new Sanyo Xacti photo and video camera that Ruth had brought me.
We started at the cathedral at the top of the town via a short taxi ride from the station. The spire was missing from the cathedral being restored, but due back on soon.

The cathedral was finished in 1873 and built in the French gothic style. It was a little bit austere inside for my tastes, though the rose window was lovely and some of the statues and gargoles outside good. 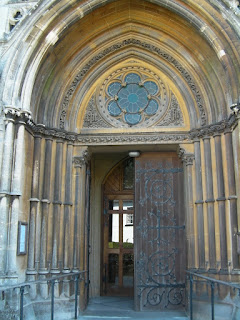 The church of St Nicholas just across the road was however lovely. We walked around the churchyard first, idyllic in the spring sunshine. Old weathered tomb stones, well cared for, with flowers, primroses and violets and other small garden patches. Old flint walls with nest sites for some birds I couldn't identify, cherry trees, a huge pine and bird song all around. It is a long time since I have felt such a sense of peace in a churchyard. Finding out that the site had had a church since the Saxon times, and this church been here since it was rebuilt in 1380 made me understand where the sense of peace and positive energy was coming from. (despite the strange railed off inside other half of the church, which belonged to the castle)

Inside the church had remnants of original medieval wall paintings, a stone carved pulpit and font from the 14th century. 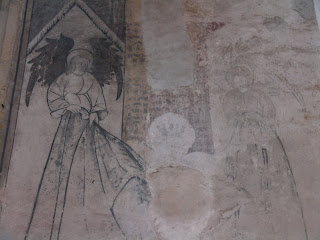 Down past some interesting antique and collectibles shops and arcades was the entrance to Arundel castle. The castle was founded in 1067 by Roger de Montgomery, Earl of Arundel and loyal baron to William the Conqueror. The castle was built at the mouth of the Arun river to protect Sussex from attack.

I really enjoyed walking round the grounds and gardens. The new formal gardens are well put together and in the style of the 14th Earl of Arundel's town palace in London apparantly.
Various gateways and pavillions are built based on Inigo Jone's designs for Arundel House and the centre piece is a version of Oberon's Palace, designed by Inigo Jones for Prince Henry's Masque on New Years Day in 1611. 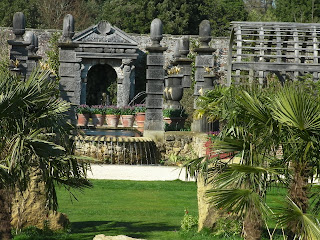 Inside this shell lined palace is a stalagmite fountain and a gilded coronet dancing on a jet of water. The golden coronet dancing, seemed to sum up something of the nature of royalty for me 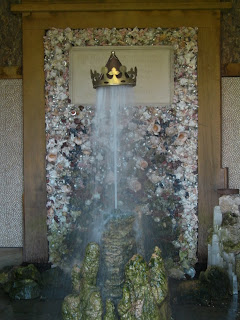 We made it up to the castle keep just before it was closing. The tiny twisting stone steps to the top of the keep were incredible, I was trying to imagine how people could have been running up and down these stairs in battles. The view from the top across the river Arun was beautiful. 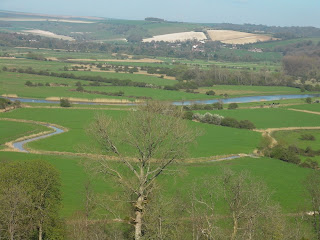 Definitely worth a day out or more, Arundel really appealed to me I hope to go back to visit soon, maybe at that Medieval tournament!
Posted by Padmayogini - Wendy Le Ber at 3:10 pm No comments: