Canterbury and the Sidney Cooper Gallery 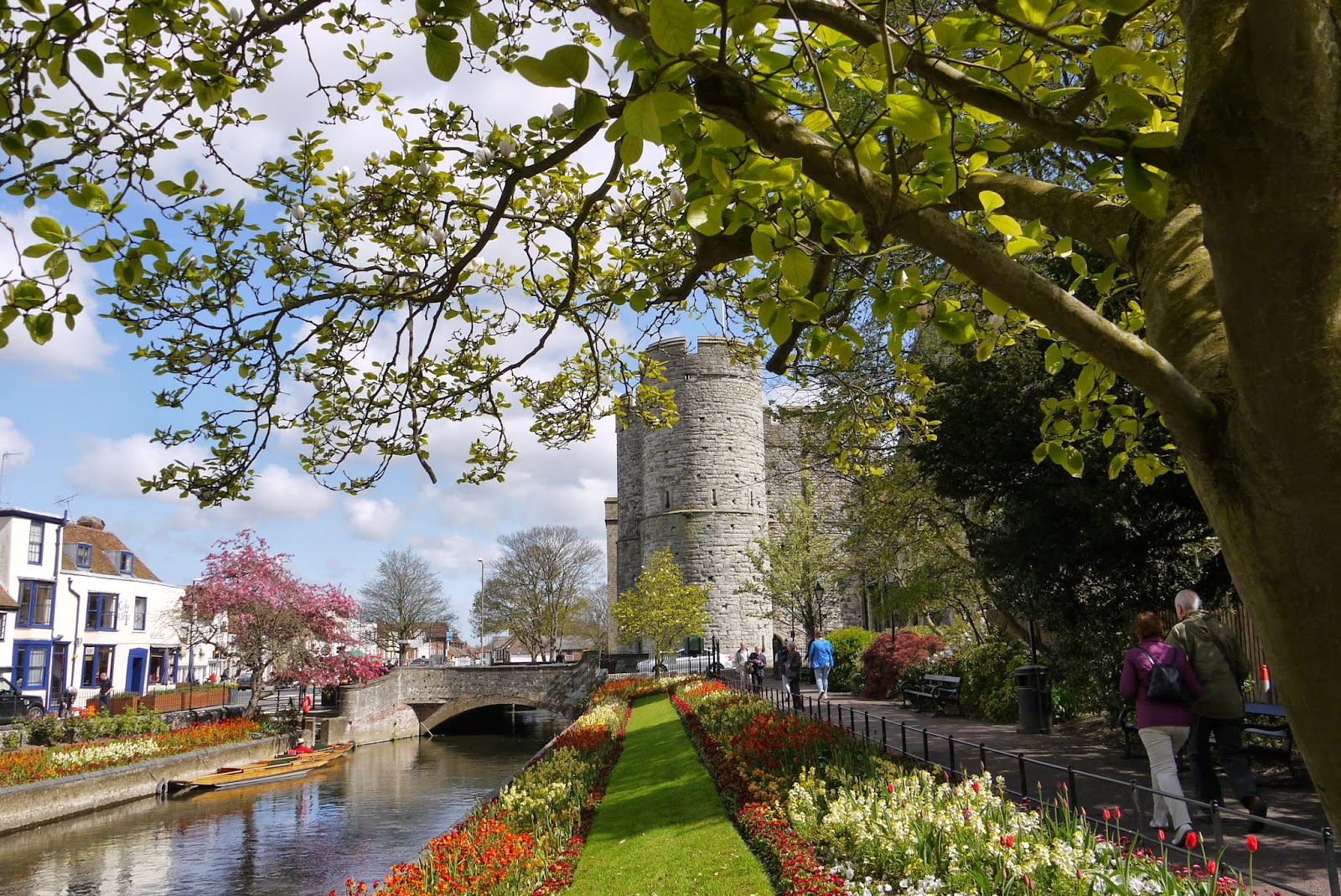 I went over to Canterbury recently to visit the Sidney Cooper Gallery and take some photographs of the city. 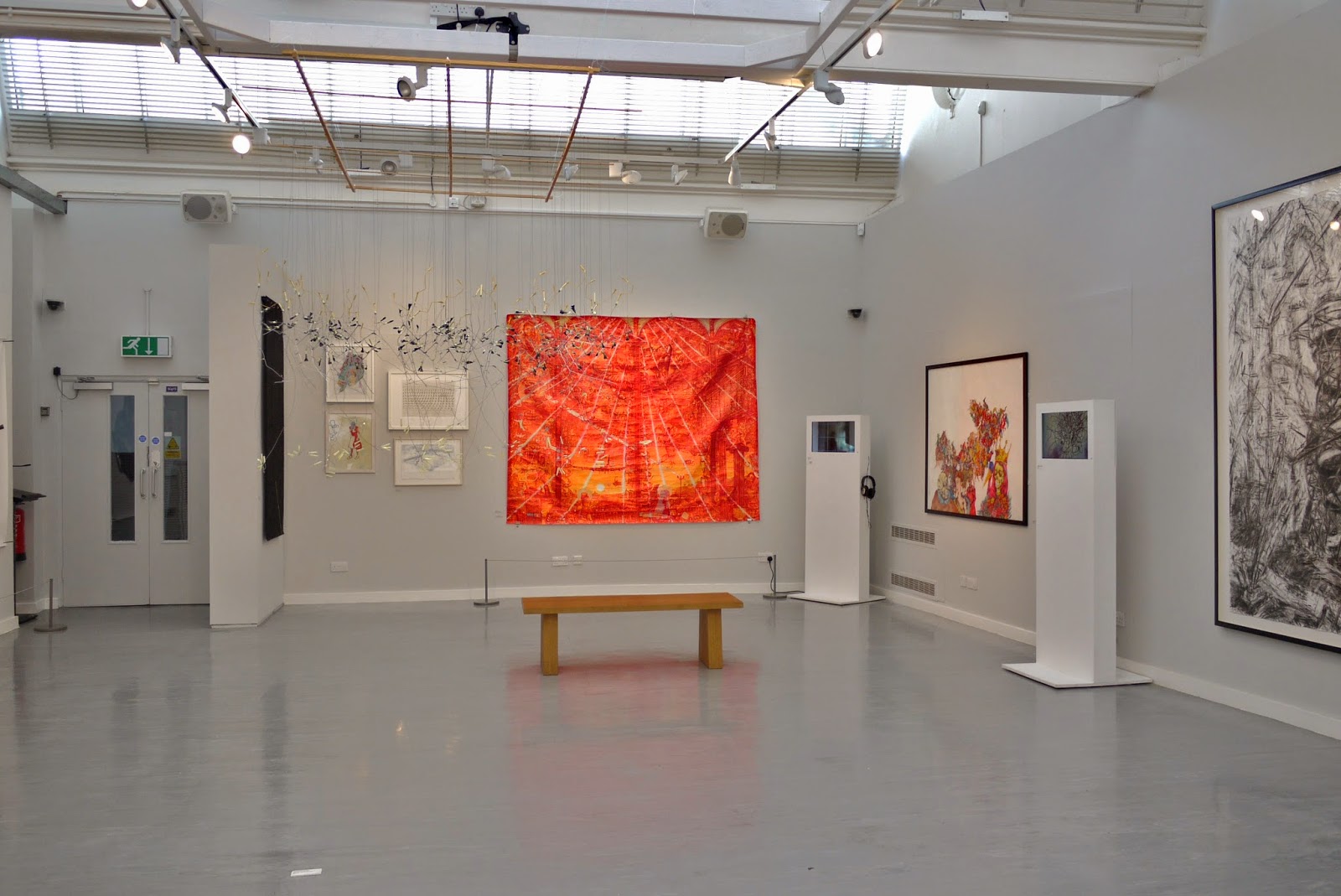 The gallery was showing The Jerwood Drawing Prize competition, Gallery website here
The exhibition had a range of works covered by the term drawing. I'm always interested in what drawing might mean today and here was a work called Cato lived for 8025 Days by Emma Douglas, which was a large coil of coloured watercolor paper and graphite  with numbers written on it. A poignant piece  made in response to the death of her son. Link to Emma's site here 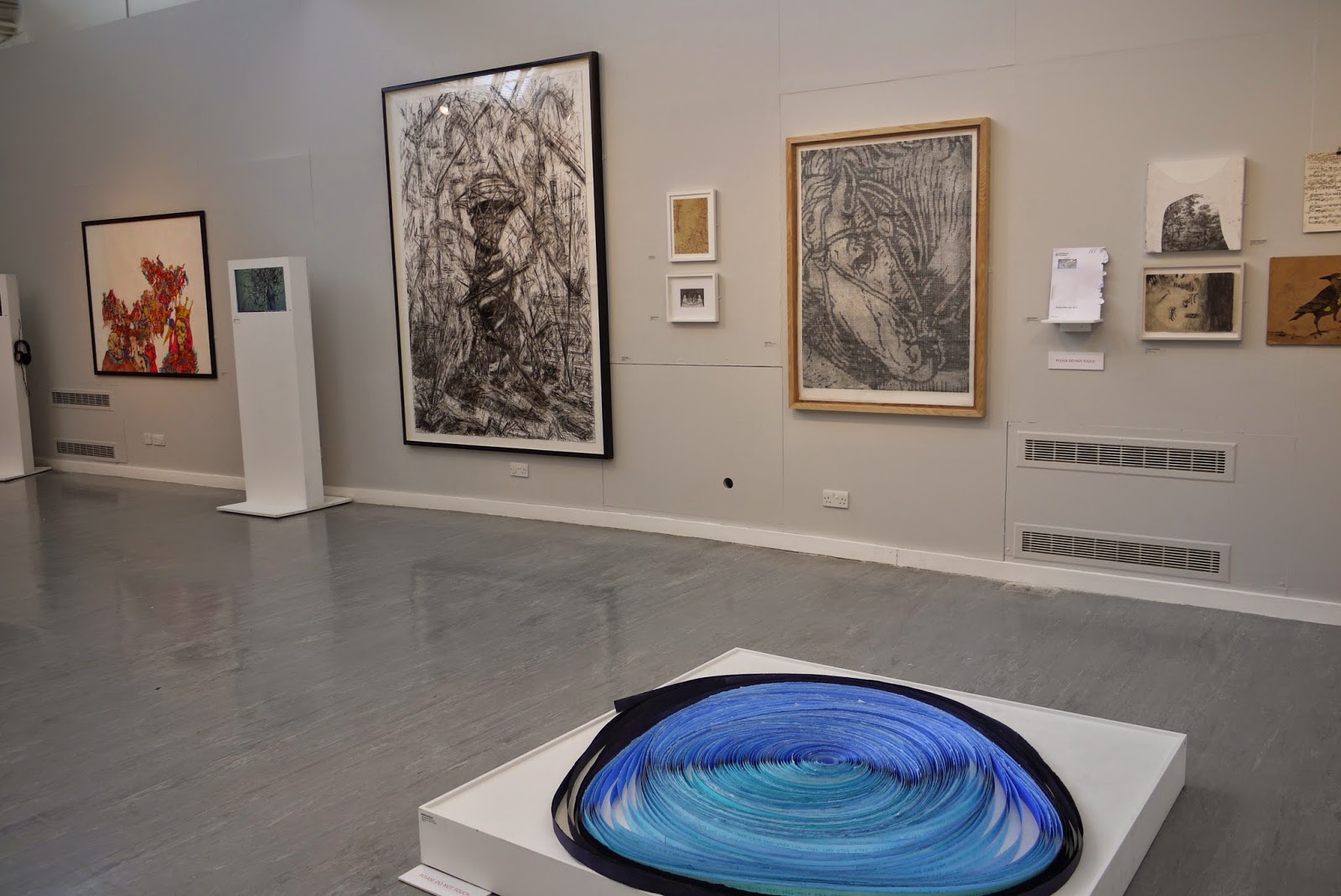 A small group of work caught my eye including Colleen Brewer's Pimp my Corpse, which explores our notion of death and ideas of perfection. The work was made on an old piece of salvaged MDF board and shows a bird painted in inks and acrylics with some of its feathers missing. 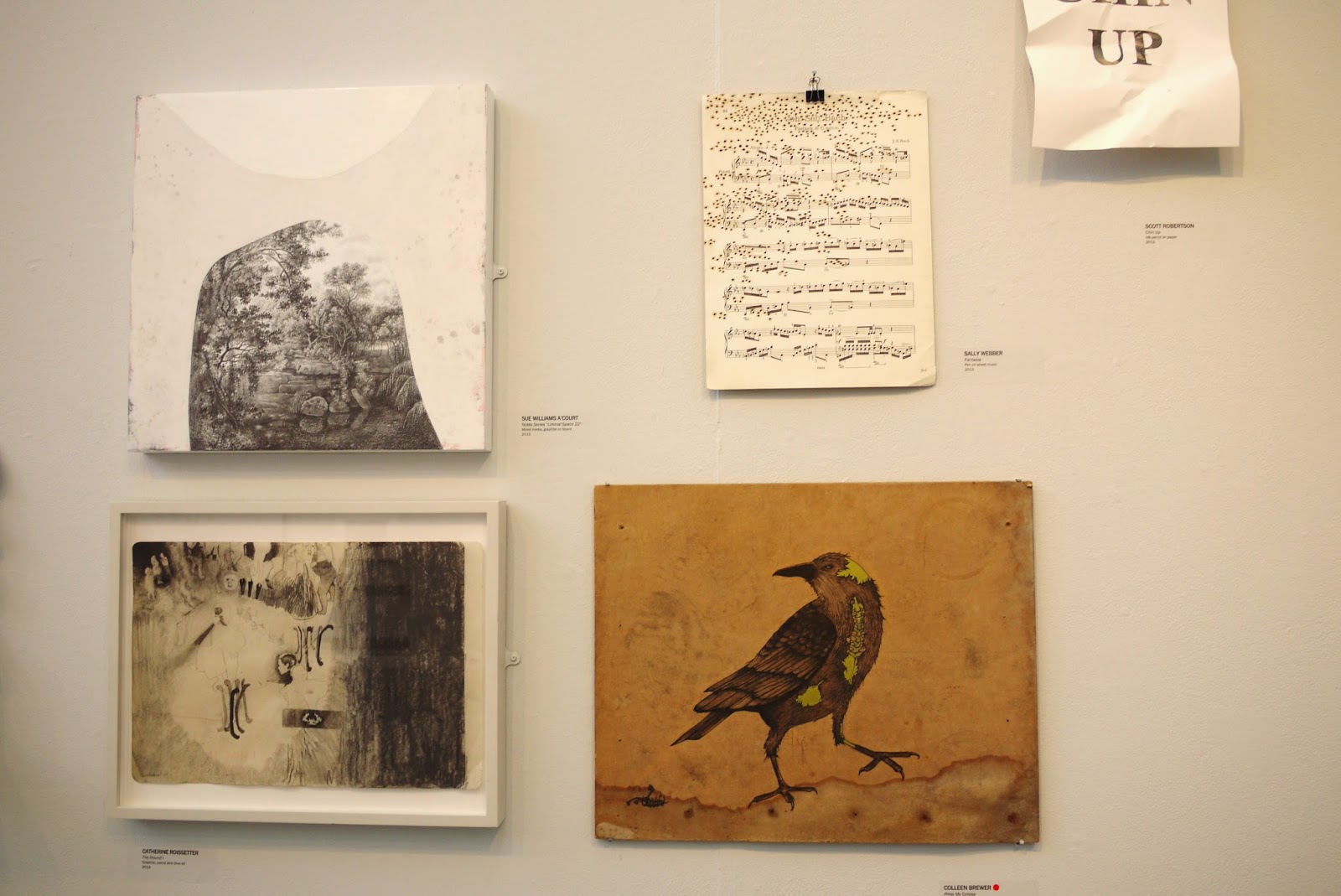 I was interested in what Sue writes about her latest works "My latest work was developed from 64 experimental collages i made inspired by seeing some rare Tantric images by anonymous modern painters in northwest india intended to further the practice of meditation.  I started to look at historical images representing the sublime and to contemplate the nature of "desire and longing". With this work i invite the viewer into a liminal space, presenting the  romantic landscape as a certain state of mind rather than a specific location; a place of transition in-between thoughts- impossible to find and at the same time unavoidable."

Gary Lawrence's large vibrant picture called St Stanstead and other stuff reminded me a little of Grayson Perry's Walthamstow Tapestry with the multitude of figures references and text on the piece. 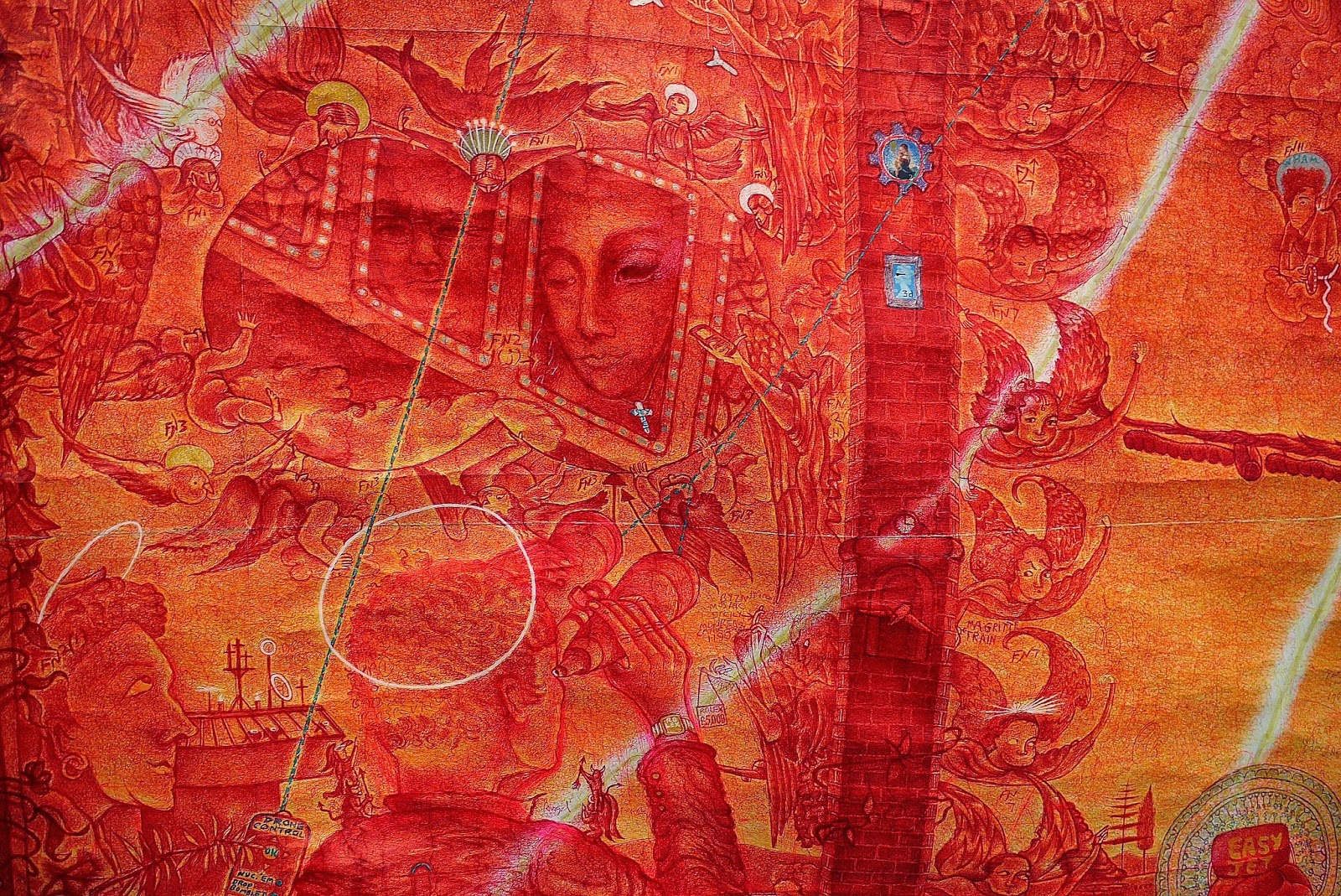 Aideen Cusack Leggett's  Dance Walpaper had me reach for my sketch book to copy some of her great little drawings of people dancing. Probably my favourite piece in the show with it's movement and sheer love of life feel. 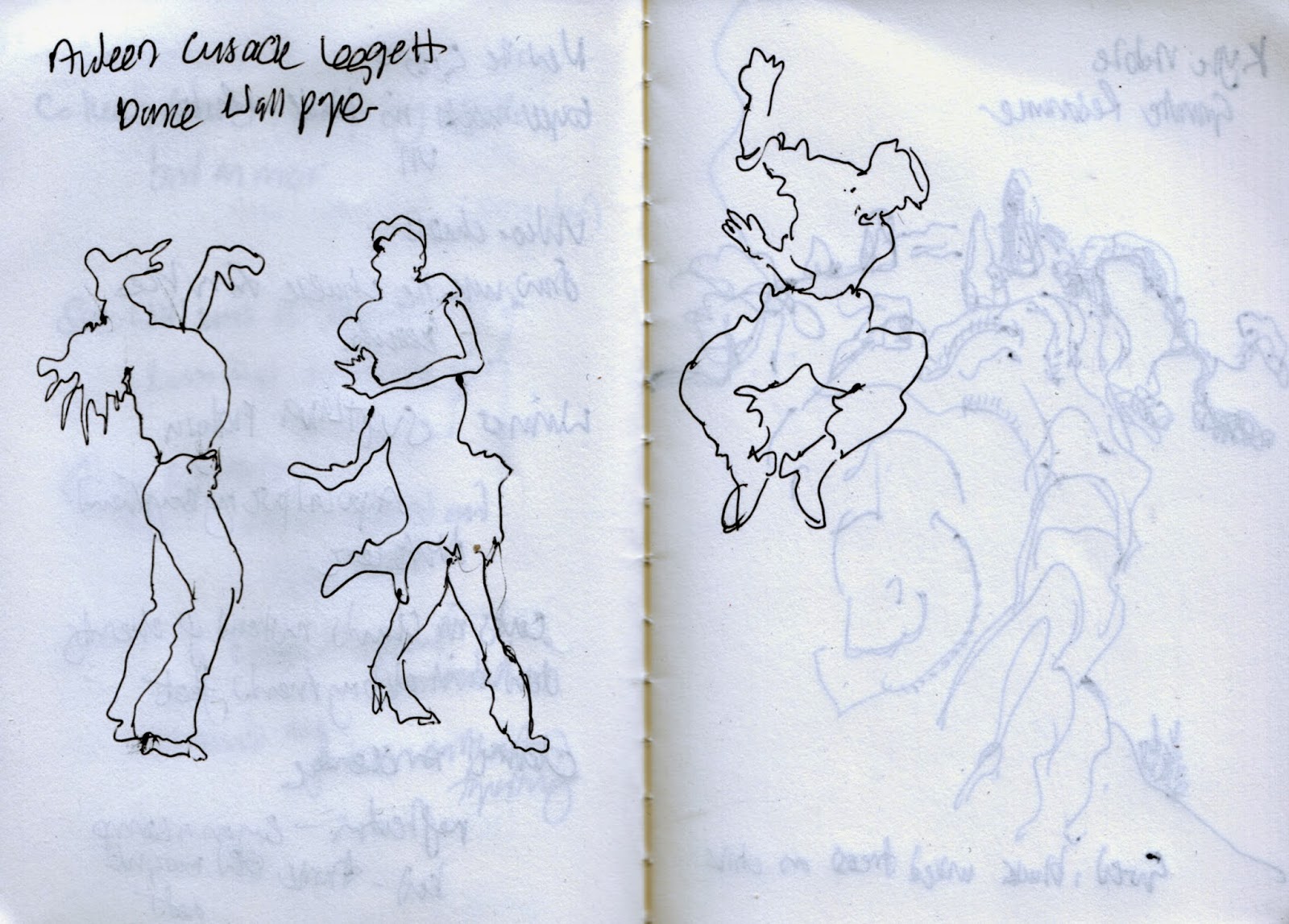 Canterbury was busy with visitors including a big influx of school groups with their clipboards and the Westgate Gardens were looking very picturesque in the sunshine with the trees in blossom and the river reflecting the blue sky. 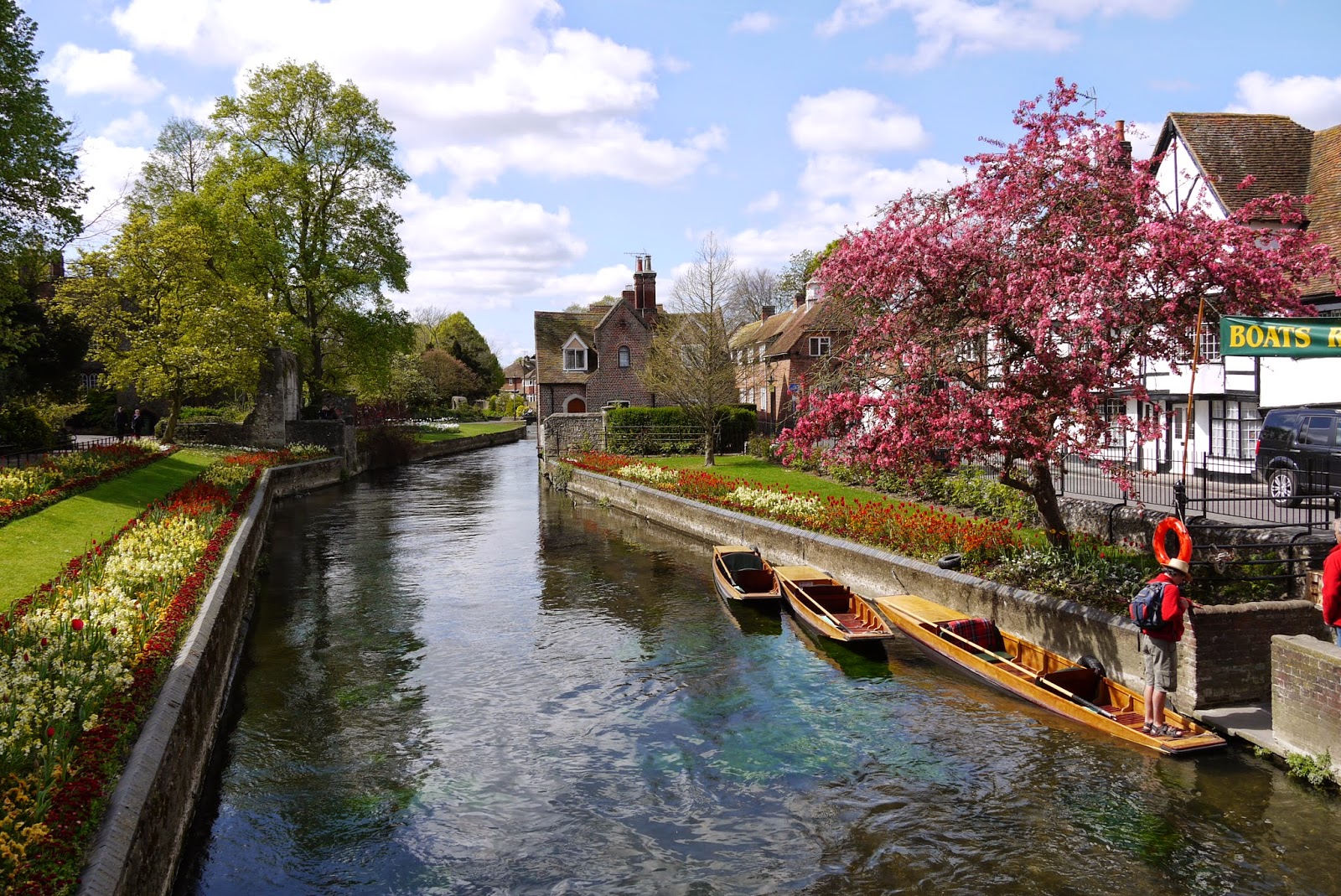 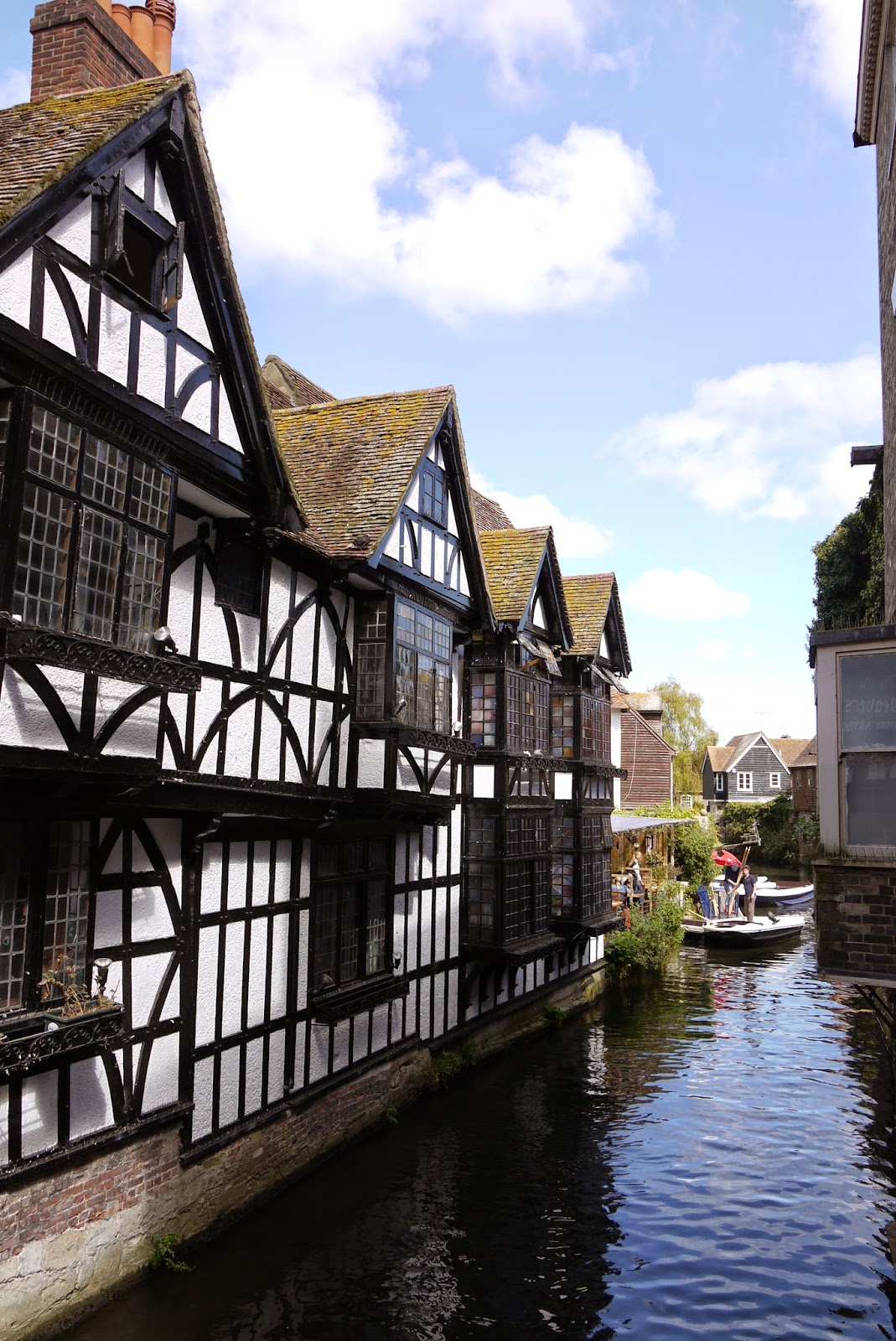 Posted by Padmayogini - Wendy Le Ber at 2:29 pm No comments:

A tribute to Alan Davie

I recently found out that the great Scottish artist Alan Davie had died. I have been attracted to his work for some time, looking for other artists that have a spiritual, mythic or symbolic elements to their work. The Guardians obituary here


Such artists are not usually prominent these days in terms of exhibitions nor usually praised by critics.
I didn't see any of the solo shows that Alan Davie had unfortunately, but saw the odd painting in group shows. So my main connection has been by way of books.
However Gimpel Fils is showing Alan Davies latest art work, 24th April till 23th May which I hope to see.
Gimpel Fils website here


I have the exhibition catalogue of Alan Davie's show at Tate St Ives, Jingling Space, 2004, which I look at regularly and remain inspired by the work shown in there.


Paintings such as Fairy Tree No 5 1971, Cosmic Signals No 7 2002, Island Maps No 14 1998, and Shaman's Window No 3 1999 all have Alan Davie's characteristic use of signs and symbols from a broad range of cultural and spiritual sources


They are colourful, energetic works that have an elemental feel you can trace by following the lines and forms in the paintings.

In the St Ives catalogue Alan Patrizio writes that " Davie views his activity as a painter as ' fundamentally the same as artists of remote times..... engaged in a shamanistic conjuring up of visions which will link us metaphorically with mysterious and spiritual forces normally beyond our apprehension.' "


Patrizio also writes that "There are both immediate and broad reasons why the work is not 'abstract' in any meaningful sense. The psychic power of images - recognised by jung and the reason why Davie has never abandoned figuration - means we are compelled to make and recreate them anew, over millennia and across cultures."

Posted by Padmayogini - Wendy Le Ber at 5:18 pm No comments: