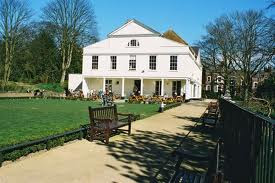 This year I finally managed to enter some photographs in the Lauderdale House Photo Open competition, after thinking about it for a number of years. Info about Lauderdale house and events on here I really liked the house and park around it when I visited, the house is on Highgate Hill, an area I don't really know.

There is a good cafe/restaurant there too always a plus point, and regular exhibitions in it's gallery.They accepted one of my entries, Mandala of Peace for the exhibition which was great. The exhibition is on from 2nd September to Sunday 12th September. Opening hours are weekdays Tuesday till Fridays 11-4pm. Weekends, closed Sat 4th Sunday 5th 12-5pm Sat 11th Sept. 10-1.30 Sun 12th Sept. 12-2pm upper gallery and 3.30-5pm long gallery. 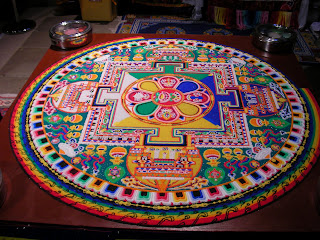 Unfortunately the private view is on the !st Sept exactly the same time as the E17 Art Trail exhibition I'm part of at the Hornbeam. I will get over to see the exhibition in the week.
Posted by Padmayogini - Wendy Le Ber at 11:51 am No comments: 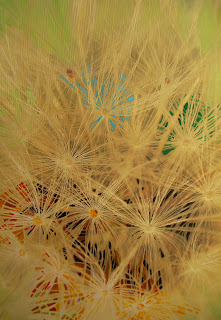 I am hanging my work tonight at the Hornbeam Environmental Centre and Cafe, ready for the private view and press event tomorrow as part of the E17 Art Trail info about the trail here The exhibition Common Grounds is a group show at the Hornbeam and FRP, the recycling project next door. There is some great work on show including painting, photography, textiles, artists books and mixed media pieces.

My original work based on a photograph of mine, a close up of a dandelion seed head, has included painting but not the textile work I had envisaged. But the work Natures Clock has expanded to include another small painting looking at the nature of time and the moon. In particular the evocative names for the moon from a number of traditions, like Wolf Moon, for the full moon in January from Medieval and native American traditions The Harvest Moon, October in a number of traditions including Celtic traditions and September's Nut Moon from the Cherokee tradition.

It's funny how work changes as you carry on working on a piece, I should have realised that writing about a piece before finishing it would prove tricky 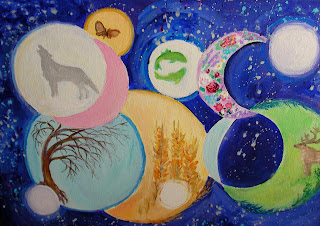 
The private view is Wednesday 1st September 6.30-9pm at the Hornbeam and recycling project next door.458 Hoe St, E17 9AH Hornbeam info here
I have also put in a visitor to the Art Trail. A friend of mine Katja Rosenberg is curating the exhibition in the gardens around the Vestry House Museum. She has also put up a great little website for the show here.

My visitor is the Little Blue Bird of Happiness, here and I will be helping Katja install the exhibition tomorrow at Vestry House. More visitors can be added to the installation during the Art Trail. 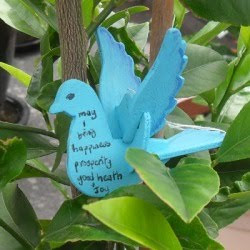 Posted by Padmayogini - Wendy Le Ber at 10:59 am No comments:

Favela and Fountains on the South Bank 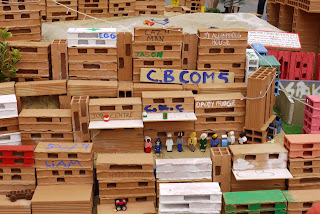 The South Bank has a festival of Brazil on till the end of the month, and one of the works Project Morrinho is a model city, inspired by the work of young people in Rio de Janeiro, which is being built outside of the Festival Hall. 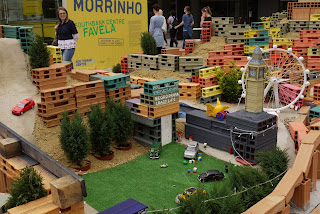 I liked all the details including several this is not a favela signs. I'm not sure how well the conditions in a favela are really evoked by the piece, though I think there has been a programme of activities attached to the work.
I also liked the London details in the construction.


Jeppe Hein's art installation Appearing rooms is working just a bit further along towards the Purcell room. It is the series of fountains that appear and disappear and children and adults all seem to enjoy the running into the clear spaces before the fountains cut them off and if lucky not getting too wet in the process. 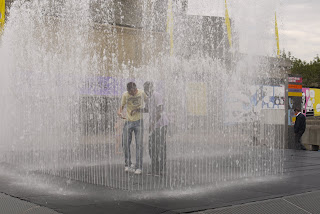 Some come prepared with towels and costumes too. 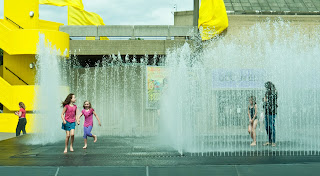 Posted by Padmayogini - Wendy Le Ber at 5:26 pm No comments:

Take Away, The Outside World, Exhibition 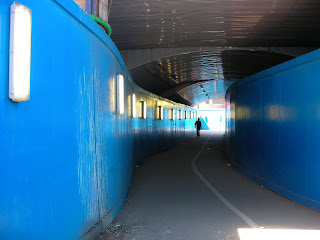 I've put in a photograph to Outside World in an exhibition called Take Away. It's the sort of exhibition I like where you get to take away an other artists work at the end of the show.

artists were asked to respond to the theme The Outside World and I chose one of my photographs of the Olympic site for the reasons I wrote about below.

What Interests me about the ideas of space and outside space here in one of my images taken around the Olympic site, is both that of the changing nature of space and its enduring qualities, space after all is what contains all things.

The Olympic site is changing the environment/outside space in East London significantly, and at the same time there is a need to win hearts and minds for the games, to change our internal space.The space will also be a site of corporate business and advertising creating a mediated outside space that seeks to influence this internal world/space we have.

There is potentiality in the Olympic site, which I see represented by the light at the end of the tunnel in the photograph. The blue colour of the hoarding adds to this symbolism. The lone dark figure also struck me as symbolic of the limited nature of that potentiality for the actual community in the east End. How many of us will really benefit from the games?

The reality of living within a massive building site with its hoardings, fences, closed roads and footpaths and no go areas is also one of the reasons for taking the photograph. It is the day to day experience of being in this particular outside space.

Yet change is inevitable, nothing remains the same in our outside world/space. What's constant could be called space itself, as space contains all things as they change, but does not change itself. Reflection on the nature of outside space inevitably leads to the nature of inside space, they are both connected. 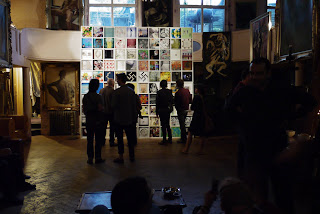 The 100sqft exhibition opened on Sunday at the Cholmeley Boys Club in Dalston. I hadn't been there before and enjoyed the quirky space, filled with various degrees of faded and well worn furniture and objects.
That little corner of Dalston looks like it's getting some more creative re development, though the main street is much the same. The new rail station does look a bit like a maximum security building however. 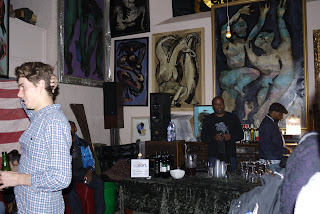 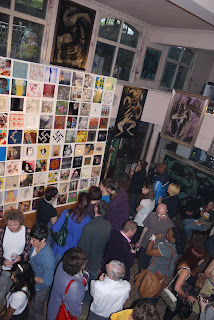 The 100 works of art on display looked great displayed at the end of the room. I like the philosophy of Carne's vision and of the quite random mix of work you get because of it. They had produced a catalogue/book too which was a good idea. The next exhibition is in New Orleans.
Posted by Padmayogini - Wendy Le Ber at 12:17 pm No comments: 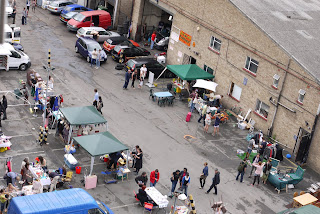 I managed to get over to Hackney Wicked this year, an arts event held over a variety of studios and spaces around Hackney Wick. The area is still pretty run down, although the Olympic stadium and park are literally just over the river from Hackney Wick.

There was a market there, which runs quite regularly, vintage, crafts, bric a brac and food. I liked the vibe, the alternative nature of the place.

The Schwartz gallery were showing work by Doug Burton, I watched the computer generated animation, which was fascinating. The forms flowing and changing, exploding and melting away.The Found Art Collective, had all sorts of found, dumped objects on display, including old TV monitors, some flickering into sparks of life, metal, wood, doors and spools of film all arranged in some sort of groupings. 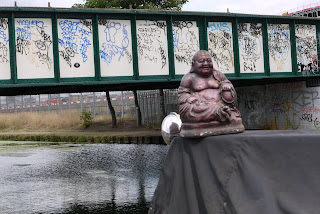 Hanna Clarke and Kit Merrit had filled their studio with documentation of 24 hour periods, questionairres, tables, and notes all around. I was only able to see part of the event and a few studios, Neale Marriott's landscapes in oil stood out and Ayano Endo's shamanic work and the mixed media work of Abigail Thomas.

I have also been walking down Marsh Lane, the grass all withered and brown this summer. It seems as if it is the meeting point for crows, dozens of them on the fields and many of their large black feathers on the ground and standing up in some strange ritualistic pattern.

I collected some of the feathers, I'm not sure how I will use them yet. There were rows of thistles down near the Waterworks, their seed heads coming apart in the wind, I stayed to watch and take photographs. 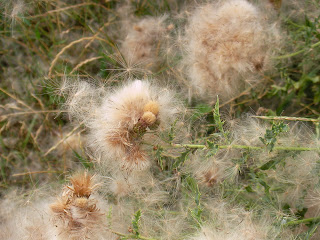 Posted by Padmayogini - Wendy Le Ber at 6:21 pm No comments: