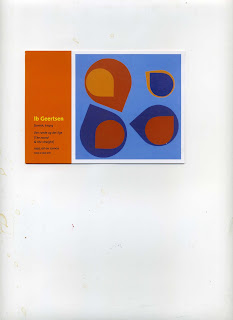 I just caught a small exhibition of Ib Geertsen's work in the Tea Building on Shoreditch High street. It was the bright colours on his paintings that I saw through the window that drew me inside for a better look. His work had a familiarity about it, though this apparantly is the first solo show of his work in London. But as he has been painting for over 70 years and his work and style has been used in glass on paper and in furniture, I think many other artists using graphics etc have been influenced by him.

Round the corner in Redchurch street was the exhibition I was in the area for, "Beneaththepavement....The beach" at the No More Grey gallery in Redchurch street. both Martin Sexton and Dominique Lacloche had work there. Dominique has used huge tropical Gunnera leaves on painted yellow sun discs on the floor
There were connections and relationships between the fact that these leaves had come from one continent to another and inspired by the natural photosynthetic properties of the leaves, she has created landscapes on their surface which lent a sense of time or history to them. 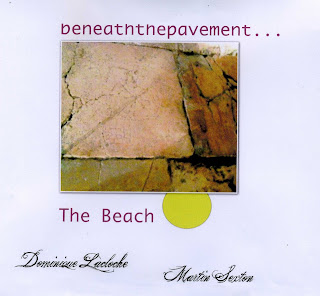 Martin was also showing "Diotima Teaches Socrates in the Ways of Love" A mask of Socrates constructed from a 4.5 billion year old meteorite, facing a projected film of the moon on the opposite wall, with a soundtrack using the oldest surviving example of a complete musical composition, including musical notation.

Martin's work is full of layers of symbolic meaning, asking us to investigate the nature of reality and the possibility of universal truths. The exhibition is on till 5th April Thursday to Sat 11am till 6pm and by appointment.
Posted by Padmayogini - Wendy Le Ber at 3:00 pm No comments:

Roni Horn and by the Thames 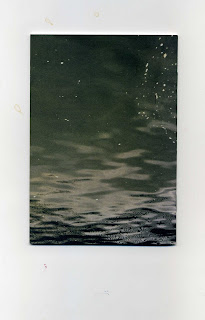 There is an exhibition of Roni Horn's work at Tate Modern till 25th May, I was struck by her series of photographs of the Thames, that incorporated text as footnotes, thoughts, reflections and quotes about the river and water including things like, "The river is a drain" "Going into water is like going into yourself" " The opacity of the world dissapates in water" 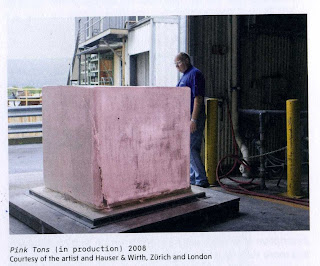 Her large glass sculptures were striking, especially "Pink Tons" A large pink glass cube, the sides are translucent and top polished clear, the light is reflected around the flaws in the glass and the polished top reflects like water. 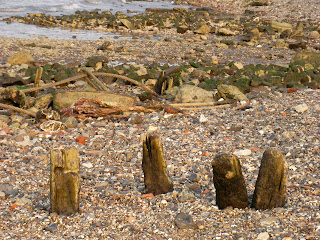 Outside the gallery the tide was out and people were beachcombing along the side of the Thames. There is access to the river at this point, so I went down and had a look myself through some of the debris washed up by the river. There were a surprising number of pieces of old clay pipes and pottery among rather a lot of modern waste, the old posts left rotting along the shore line reminded me of ancient monuments or enviromental sculptures. 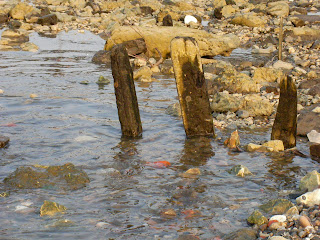 Posted by Padmayogini - Wendy Le Ber at 12:44 pm No comments: 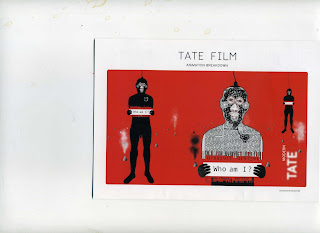 Tate Modern held an Animation Breakdown weekend this week and I was able to get along to part of yesterdays study day. I was interested in seeing the possible range of work that's being done by contemporary artists, in digital media, following my own interest in video.
So it was great to see a lot of different work and hear from some of the artists during panel discussions. Simon Faithfull showed some work made using palm pilot drawings on a trip to the source of the river Lea. He also showed a tribute, little animation of a dog who had died but through the work was re-animated. Under an Arts Council funding Simon had also gone to Antartica with a research team and sent back a drawing a day by e-mail.

I was interested in his work because it shared similarities with mine and he used animation in small amounts.

On the other end of the spectrum, Jennifer Steinkamp showed examples of her completely computer generated work, which is large scale and based and involving architectural forms. Samba Falls work questions the nature of identity and self, with an opening striking image of a skeleton lying above a barcode.

Animate Projects has many films to watch, news, events and a blog.

In the Tubine Hall was Dominique Gonzalez-Foersters installation TH.2058 looking into an imaginary future in London 50 years from now, when we will be seeking shelter from the continuous rain. 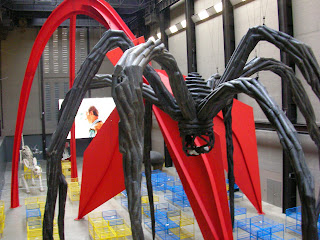 There was something menacing about the spider like creature and the bare bed frames, which had some books treated for the expected damp.The giant apple core is by Claes Oldenburg and Coosje von Bruggen. 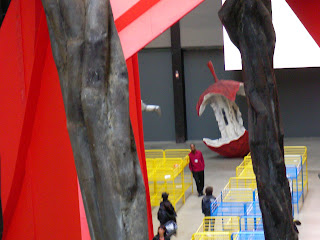 Outside the sun was still shining and I took some photographs of the silver birch trees, growing taller each year. 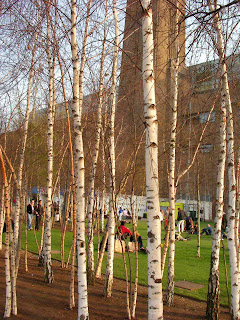 Posted by Padmayogini - Wendy Le Ber at 1:14 pm No comments: 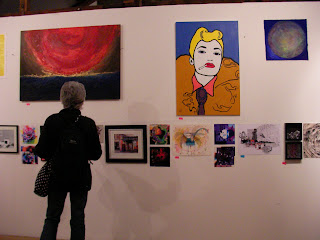 I have some work in the August art gallery exhibition and project on the value of art. On CDOs and Double Clubs Curated by Giacomo Picca the project is looking at how we value art and what we would exchange for art. It's part of London EAST festival. 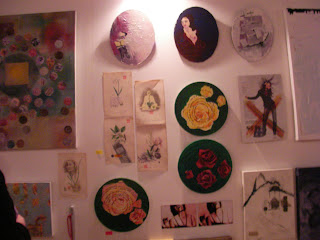 The art swap has been set up to literally swap work for something of value other than money. I am very interested in all aspects of exchange networks and am keen to find out how the swap will work. A lot of artists are taking part, it seems Giacomo's idea has struck a cord with people. To see photos of the exhibition in the gallery from Giacomo click here 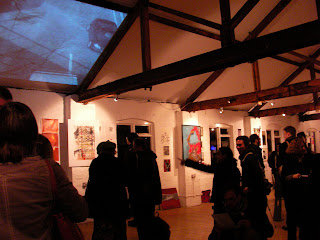 He said " On CDOs and Double Clubs is a project on the value of art, Damien Hirst said that "art is only worth what someone will pay for it", whereas Joseph Beuys said that real capital is not money but people as the sum of creativity of all individuals. This is an experiment to test these ideas." 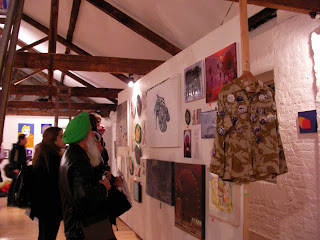 Posted by Padmayogini - Wendy Le Ber at 3:17 pm No comments: 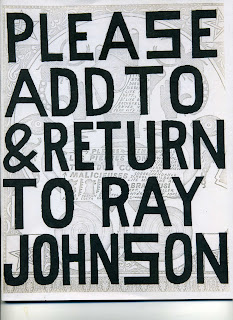 I noticed an advert for a new gallery near Liverpool street called Raven Row, last week. The inaugural show was of the artist Ray Johnson, who worked with collages and started the mass movement of mail art.
The gallery is in a lovely building, whose history below is on the galleries site. 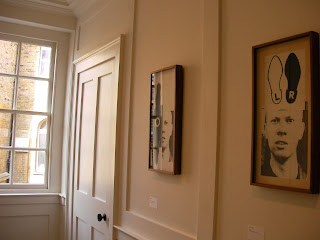 56 and 58 Artillery Lane were built around 1690 on land that was previously a weapons practice ground, and in the Middle Ages the site of the monastery of St. Mary Spital, the largest hospital in Europe. In the 1750s the buildings were transformed into luxury shops in the Rococo style by Huguenot silk merchants, Protestant settlers from France. Nonconformist and politically dissenting groups as well as immigrants began settling in Spitalfields, which experienced waves of violent protest, often by journeymen weavers against wage exploitation. In 1827 no. 58 was modernised with a plain Regency front, only a few years before the weaving economy in Spitalfields collapsed and the area became impoverished. 56 and 58 Artillery Lane housed many families who worked in the local food markets. Rebecca Levy, whose family moved in

to the building in 1925, still lives on its top floor. 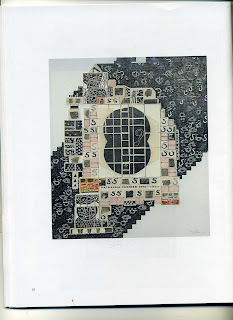 There was a large collection of Ray Johnson's work over 3 floors, including many examples of his collages and mail art. It was good to see the multi- layered collages, with their symbolic figures and signs, some very humorous, and some of the quantity of pieces he sent out over the years. He used the popular icons of the times in advertising and celebrity culture of which he was sometimes part.Sadly Ray Johnson died in 1995 after swimming off in the sea. 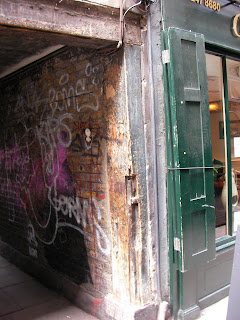 Walking around the smaller streets near the gallery it was just possible to see traces of the old part of the city, most of the area has been completely modernised now. 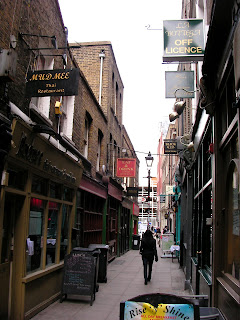 Posted by Padmayogini - Wendy Le Ber at 11:31 am No comments:

British museum and He Weimin 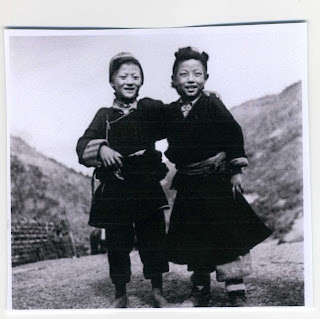 At the British Museum this week looking at a small exhibition Between Tibet and Assam: cultural diversity in the eastern Himalaya In room 91. There were photographs and ritual items, clothing and paintings from two different peoples, the Apatani and Monpas. Unfortunately a recording of part of a festival mentioned on the website was not there. There was a copy of the book of photographs collected from mid twentieth century academics and a contemporary photographer, Michael Aram to browse. 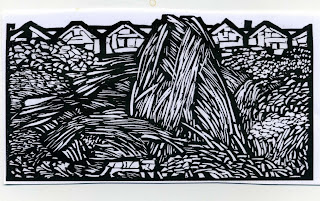 Walking down the road to Tottenham court road I noticed the Arthur Probsthain bookshop. I hadn't been in there before and so was pleased to find a collection of Oriental and African books, the bookshop is part of SOAS. There was a creative air in the shop, with a selection of cards and prints for sale and an exhibition space at the back of the shop. The wood block artist He Weimin had a show in there. I am always impressed by wood block prints, I haven't made any myself yet. I particularly liked the densely worked prints that He Weimin had done.
Posted by Padmayogini - Wendy Le Ber at 5:45 pm No comments: