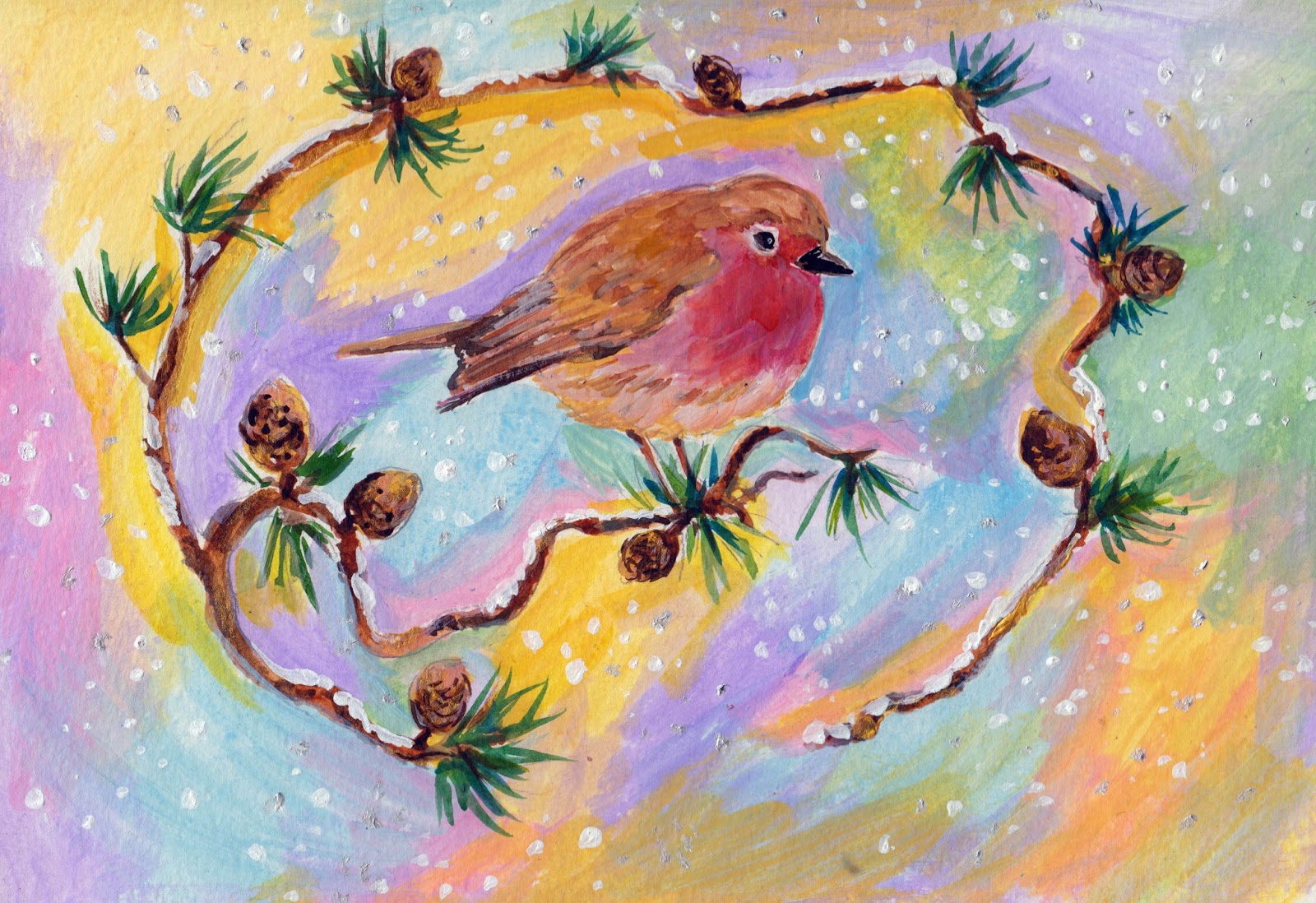 I've been working on some new watercolours of birds. I've used traditional birds, a Robin, Blue Tit and a Wren.

The birds are all sitting within designs using foliage and fruits, inspired by Japanese design, ivy, mistletoe and pine branches. 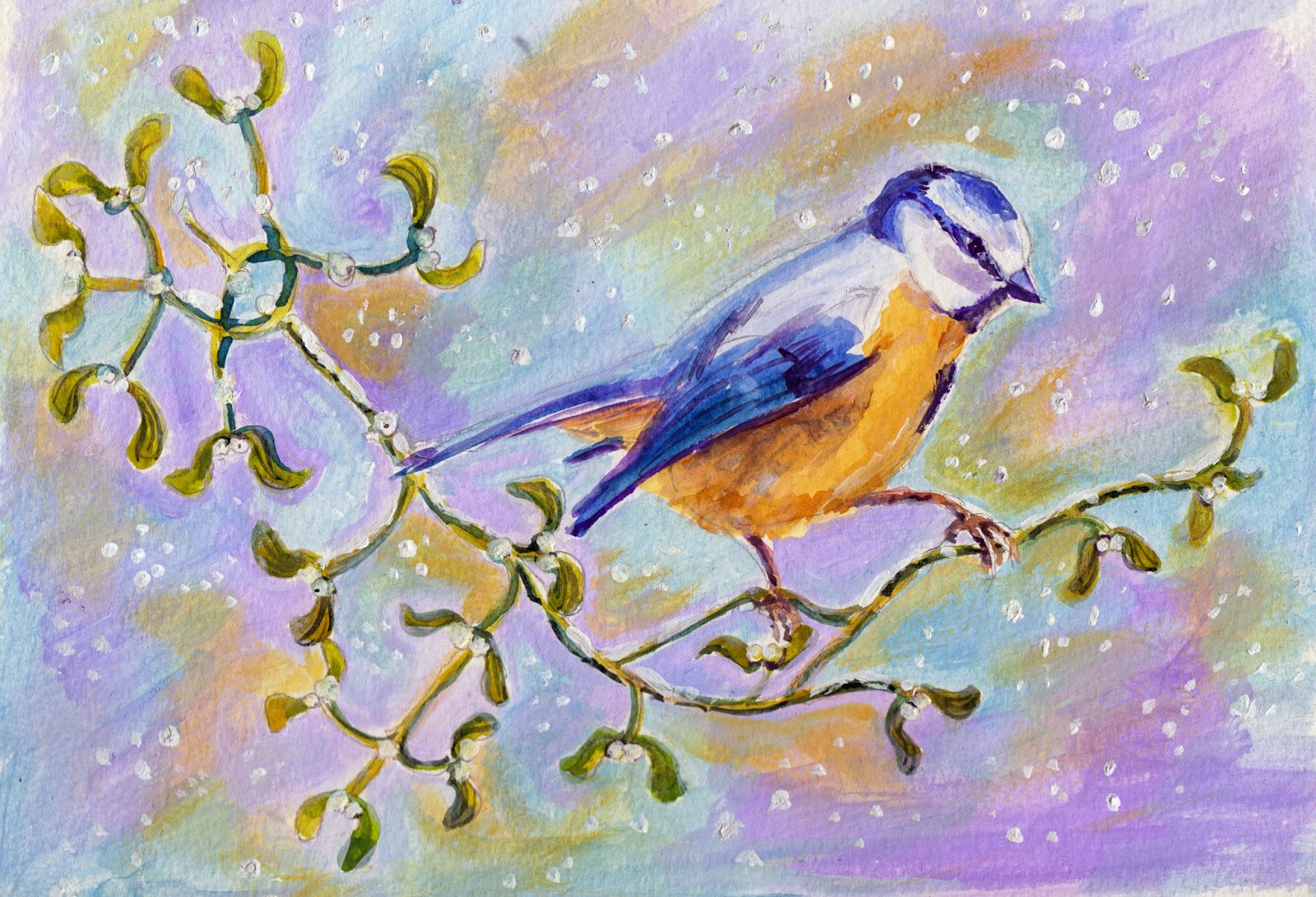 s.
I wanted to use a lot of colour and also a sparkle with gold and silver touches, so the background is a blend of blues, pinks, purples, yellows and greens and mixed with the snow falling over the scene are some silver flakes. 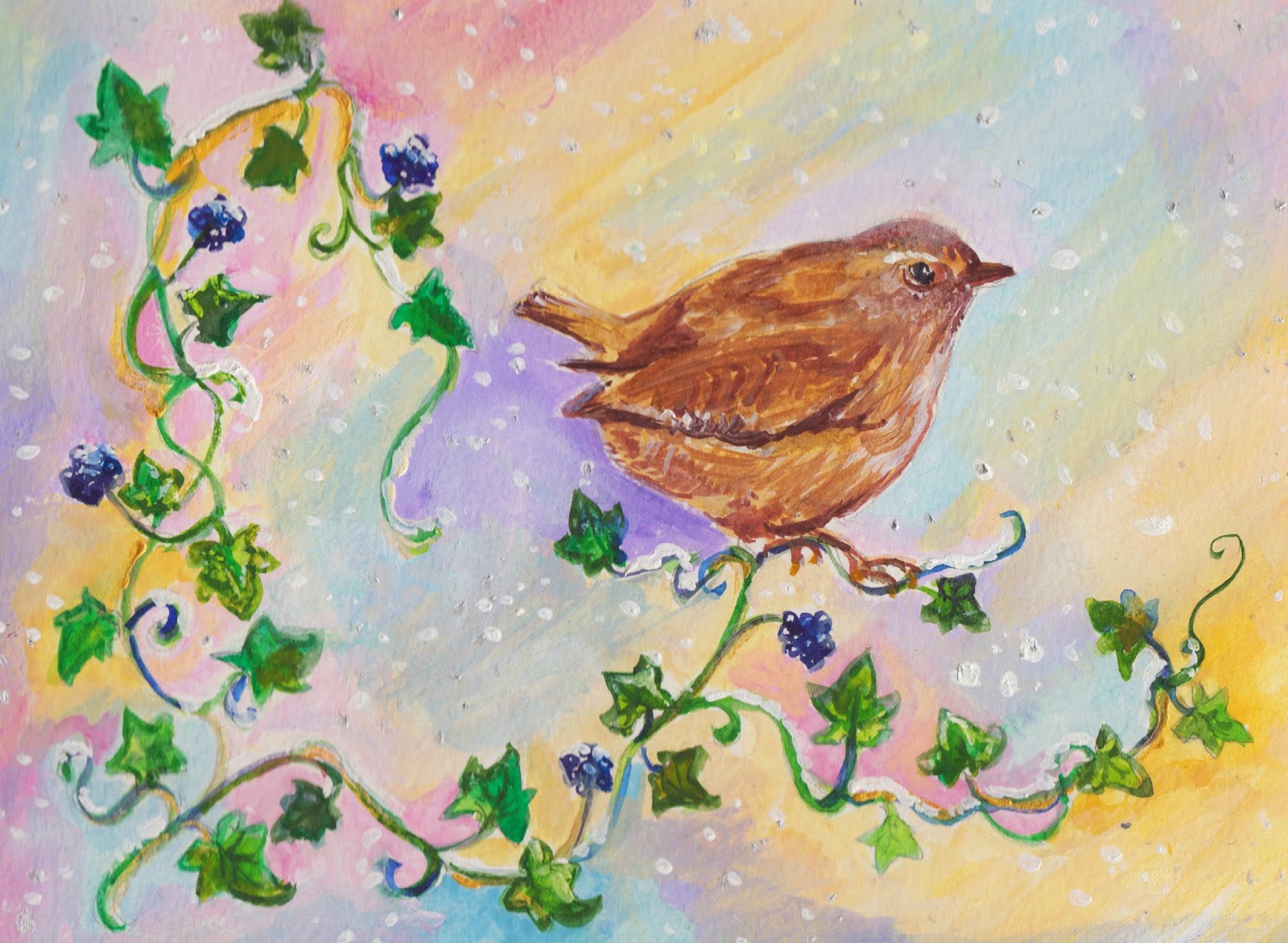 Posted by Padmayogini - Wendy Le Ber at 11:56 am No comments: 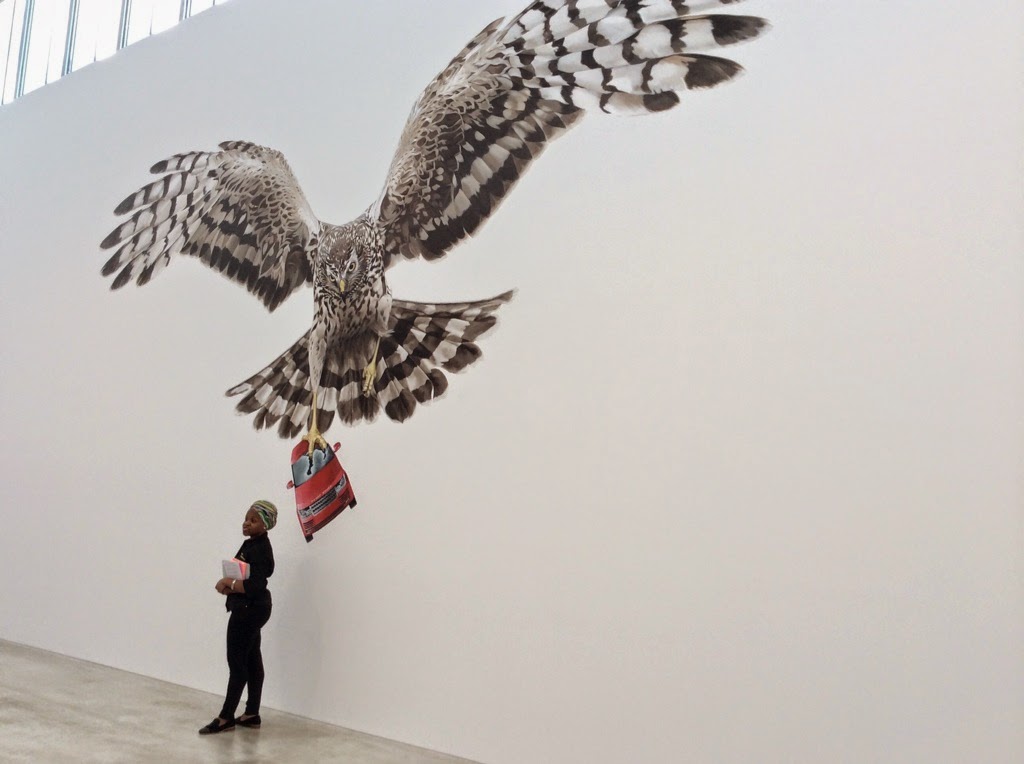 It was the opening of the new Jeremy Deller exhibition at the Turner Contemporary Gallery on Saturday. link to gallery site here  Part of the exhibition called English Magic, has been on tour since it was first seen at the Venice Biennale in 2013.

The British Council  has an article about Jeremy Deller and the British Pavillion in Venice here. 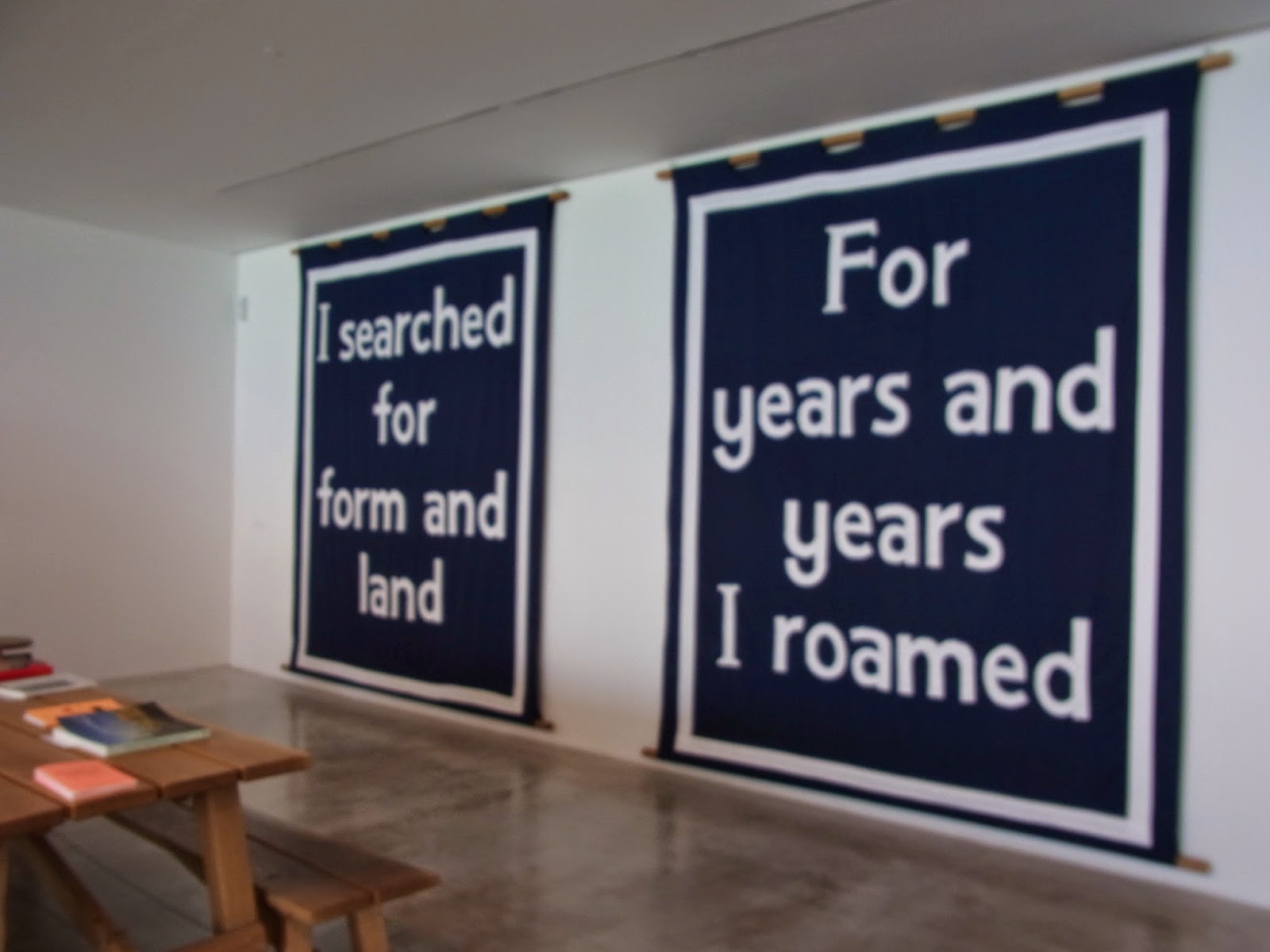 On the opening day, the Melodians Steel Orchestra were playing and the gallery was packed. The orchestra played music from Jeremy Deller's film and other works and were joined by The Big Sing, Turner Gallery's  resident choir. They also performed a piece arranged by Emily Peasgood part of the SoundsLikeArt project. 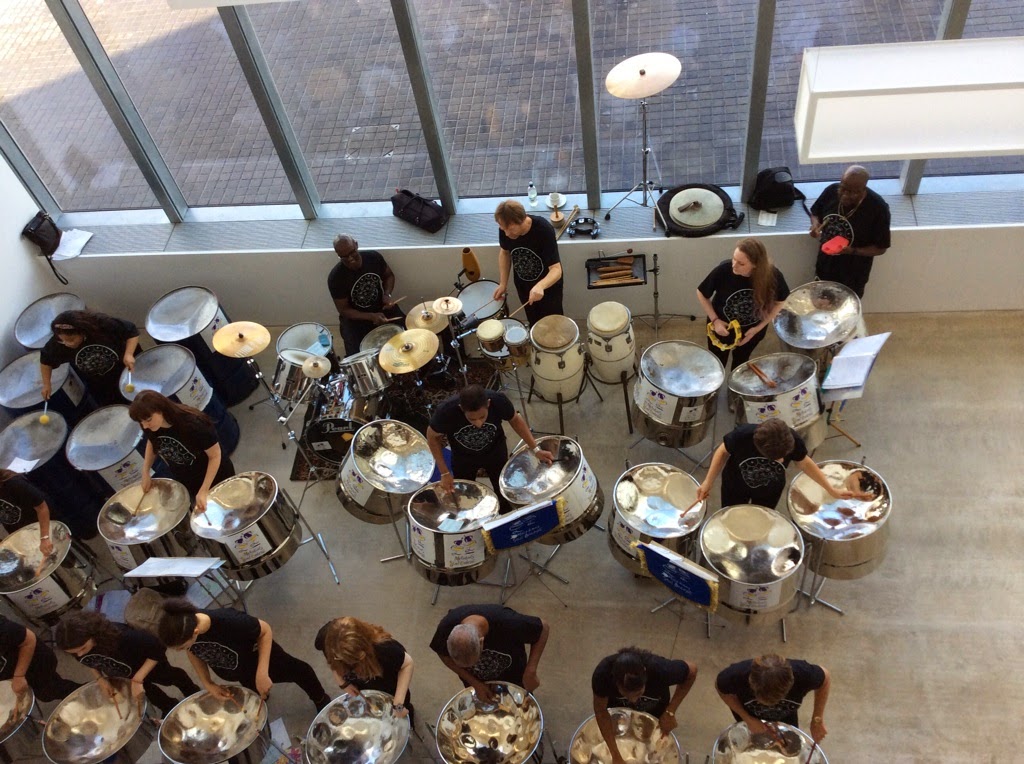 I really like the sound of the steel drums, which seem to have a particular energy that is uplifting.

I made my way upstairs during their performance to stand and look down at part of the orchestra from above. 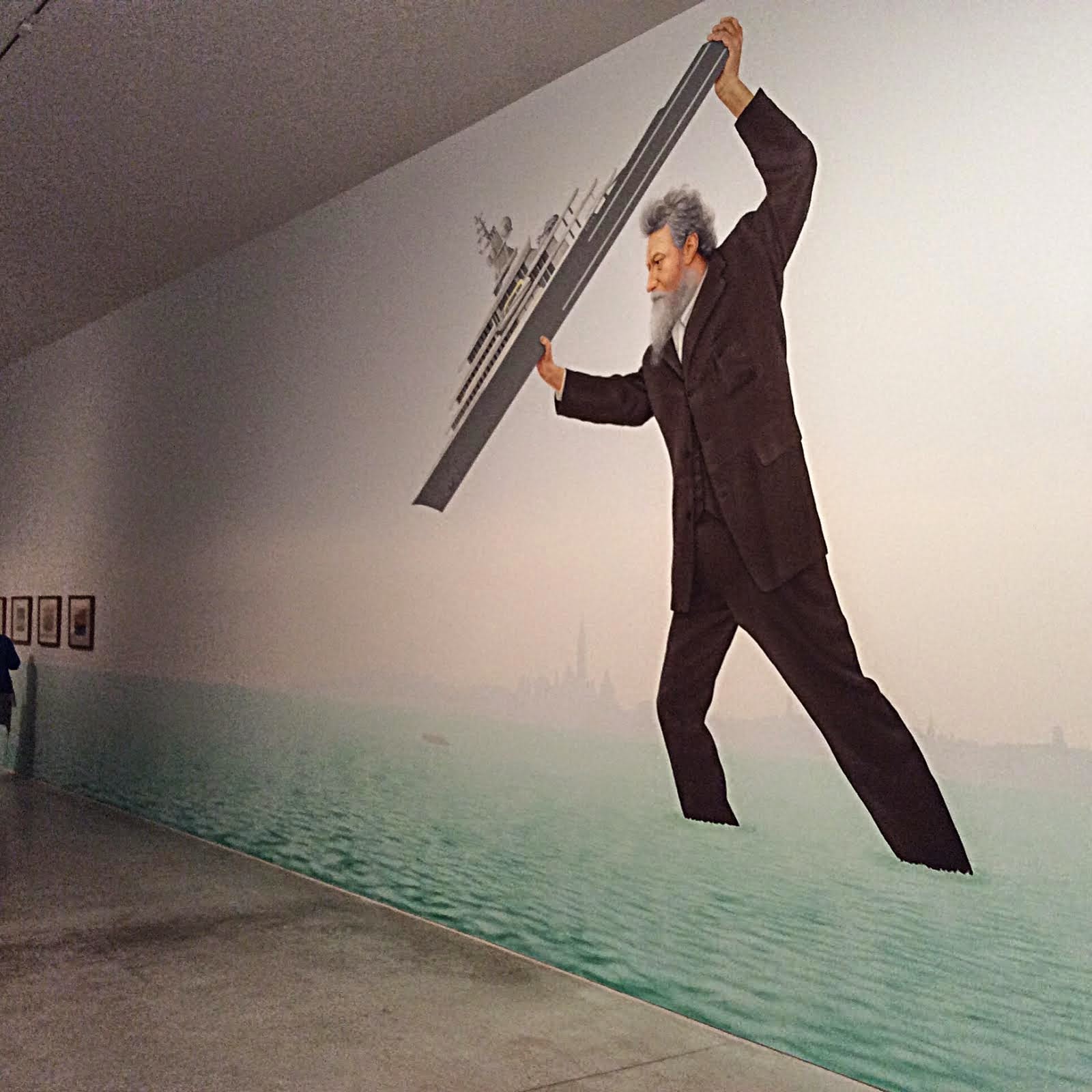 The main galleries had the English Magic exhibition and some small Turner paintings chosen by Jeremy Deller.  I only had a brief walk round and will go back several more times before the exhibition ends. 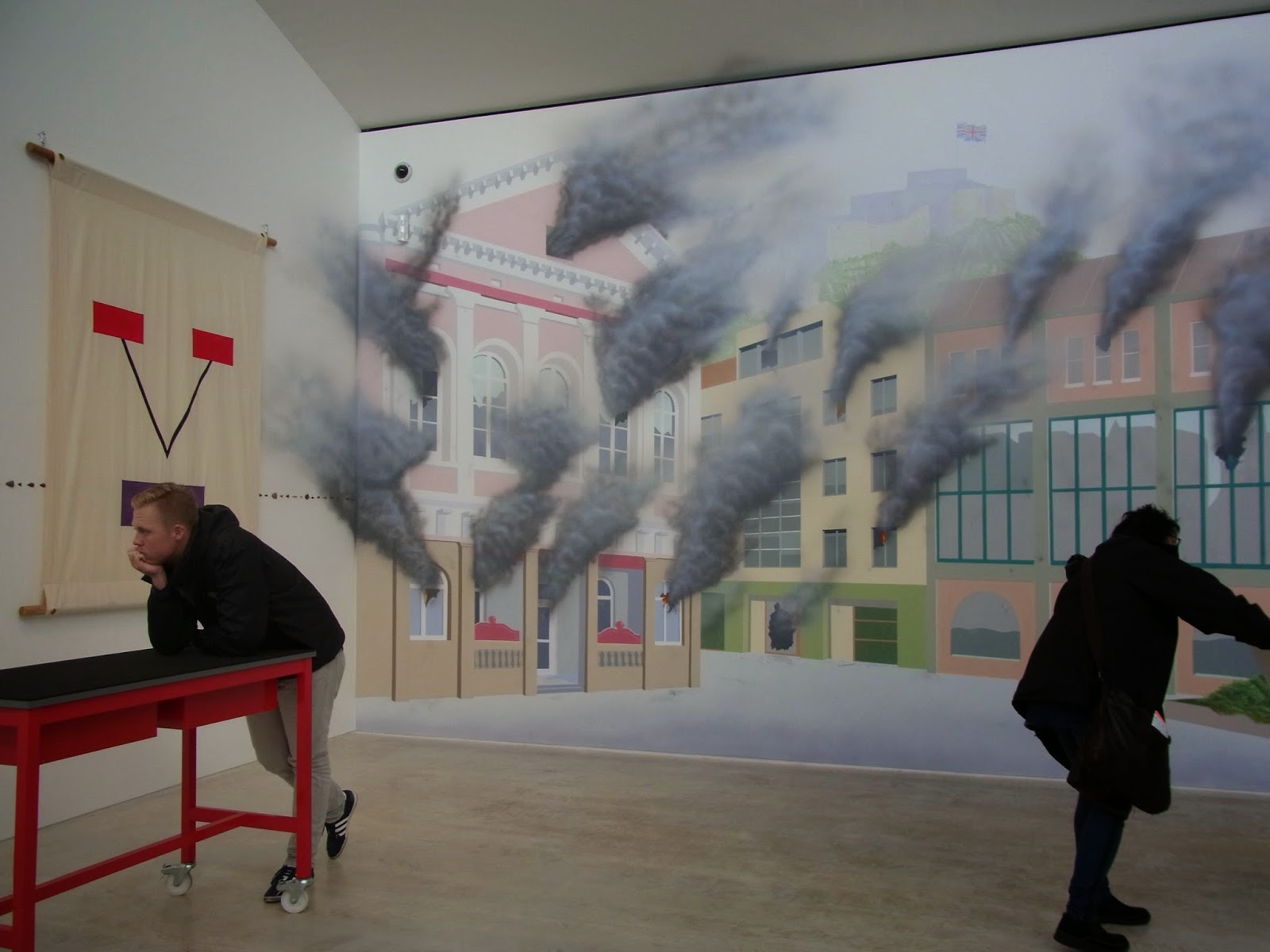 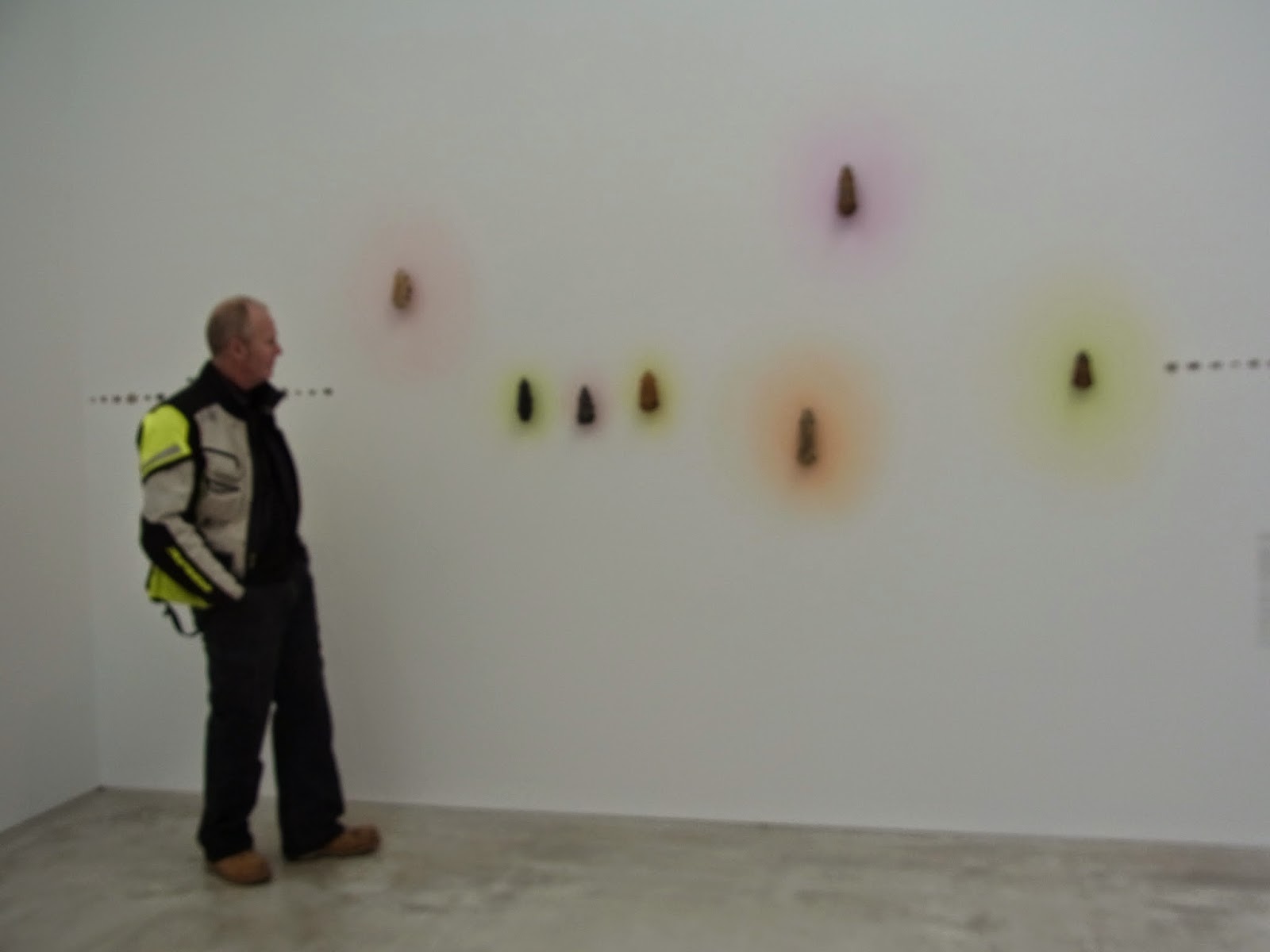 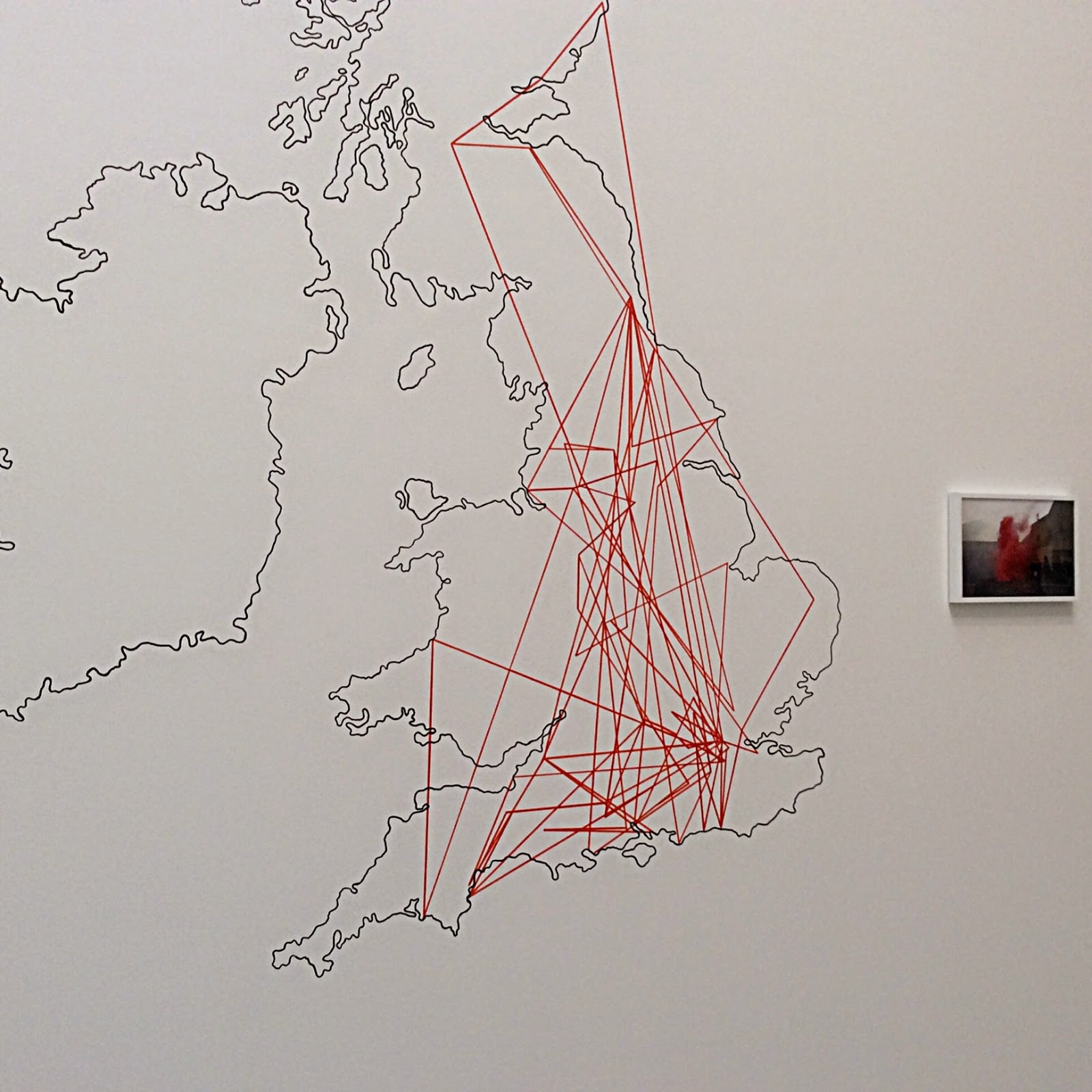 The large wall art pieces are dramatic, the figure of William Morris overturning a luxury yacht in the Venice lagoon, and the Hen Harrier holding a crushed Range Rover in it's claws.

Other exhibits include Neolithic hand axes, photos from the Ziggy Stardust Tour of 1972  and text based banner type works. 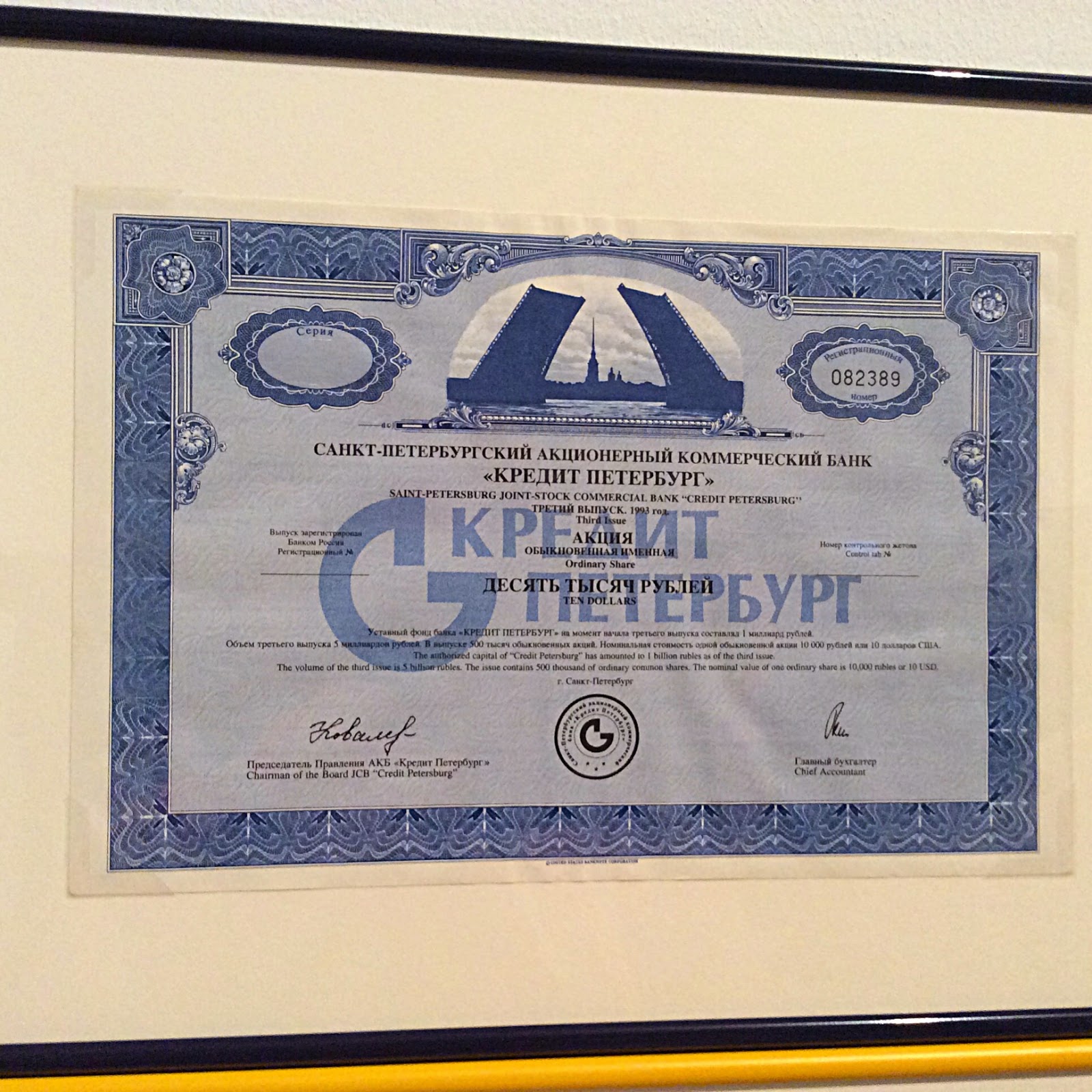 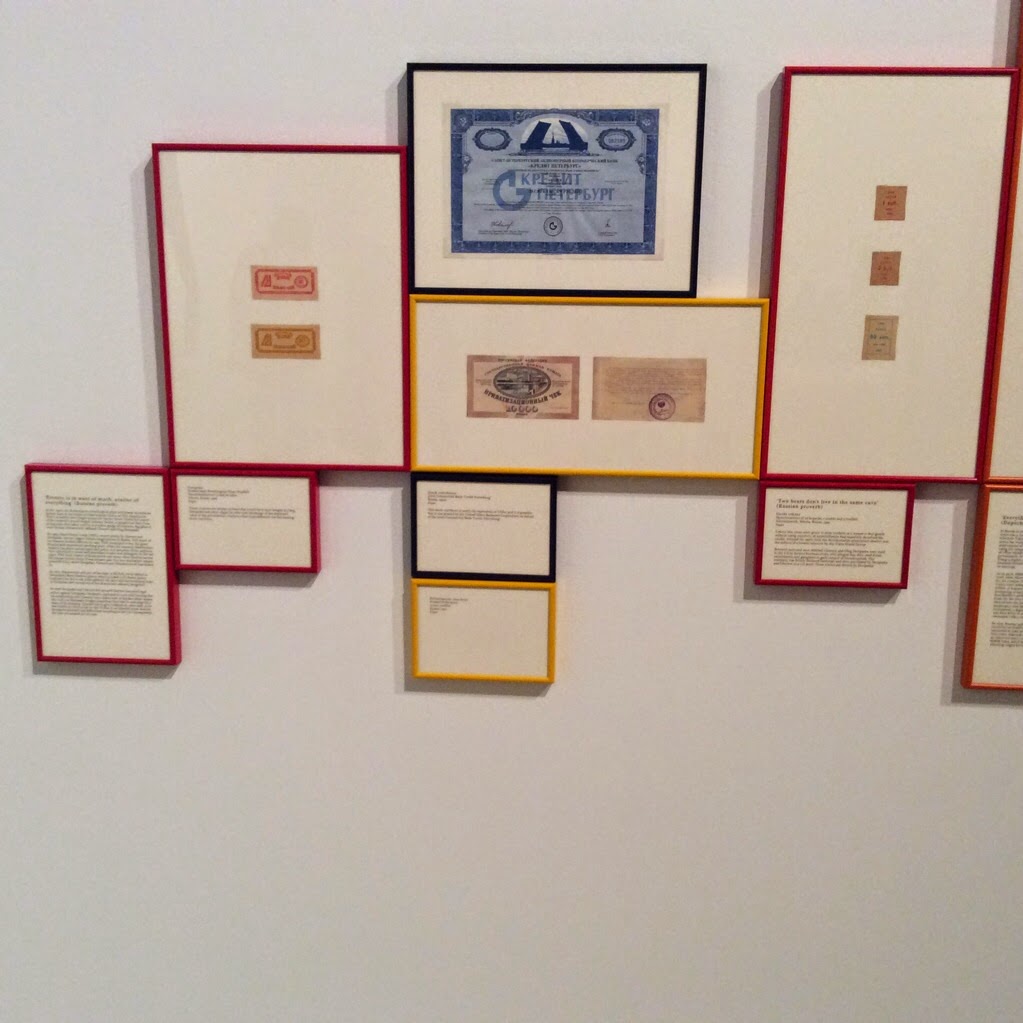 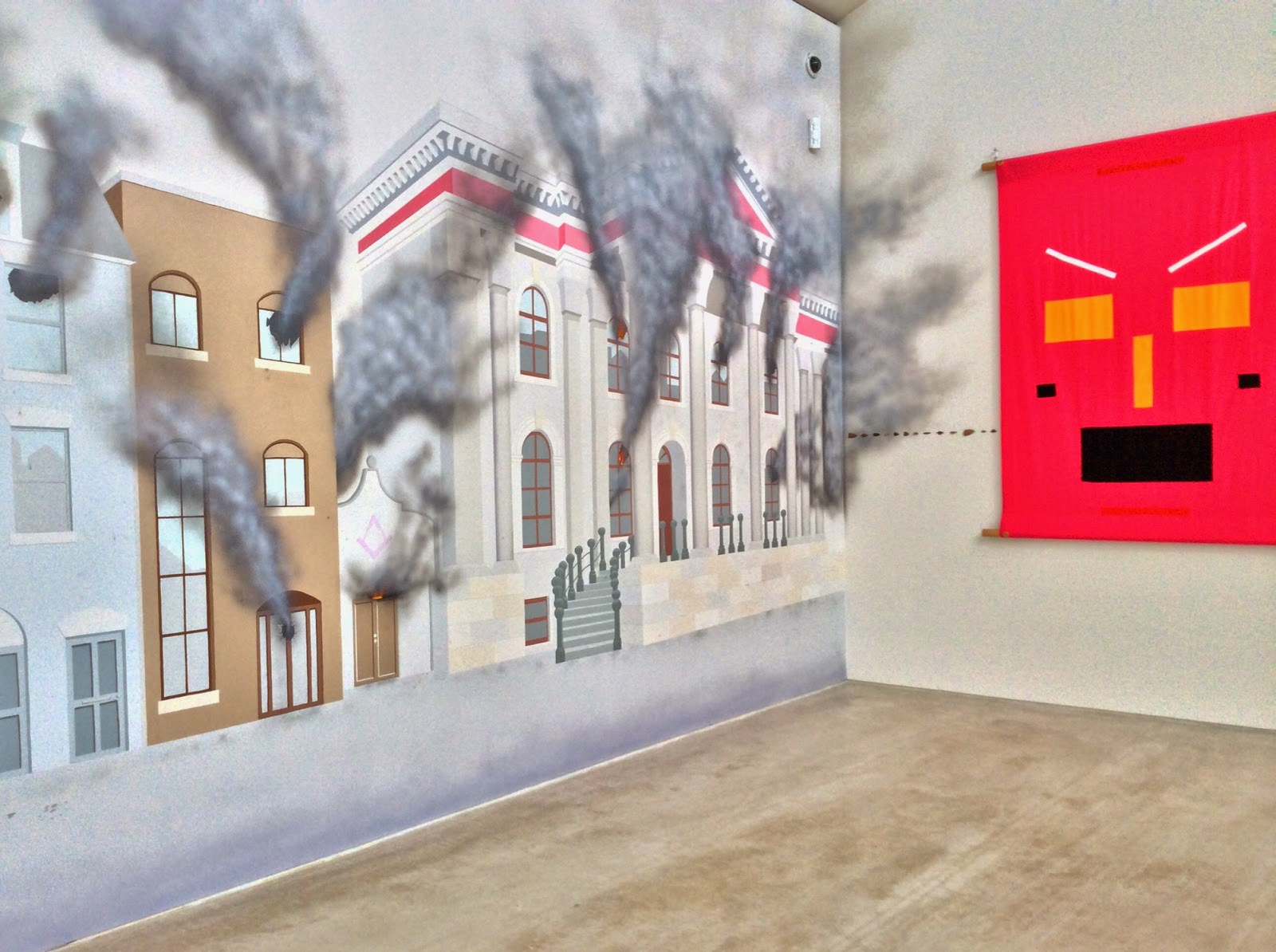 Posted by Padmayogini - Wendy Le Ber at 6:51 pm No comments: 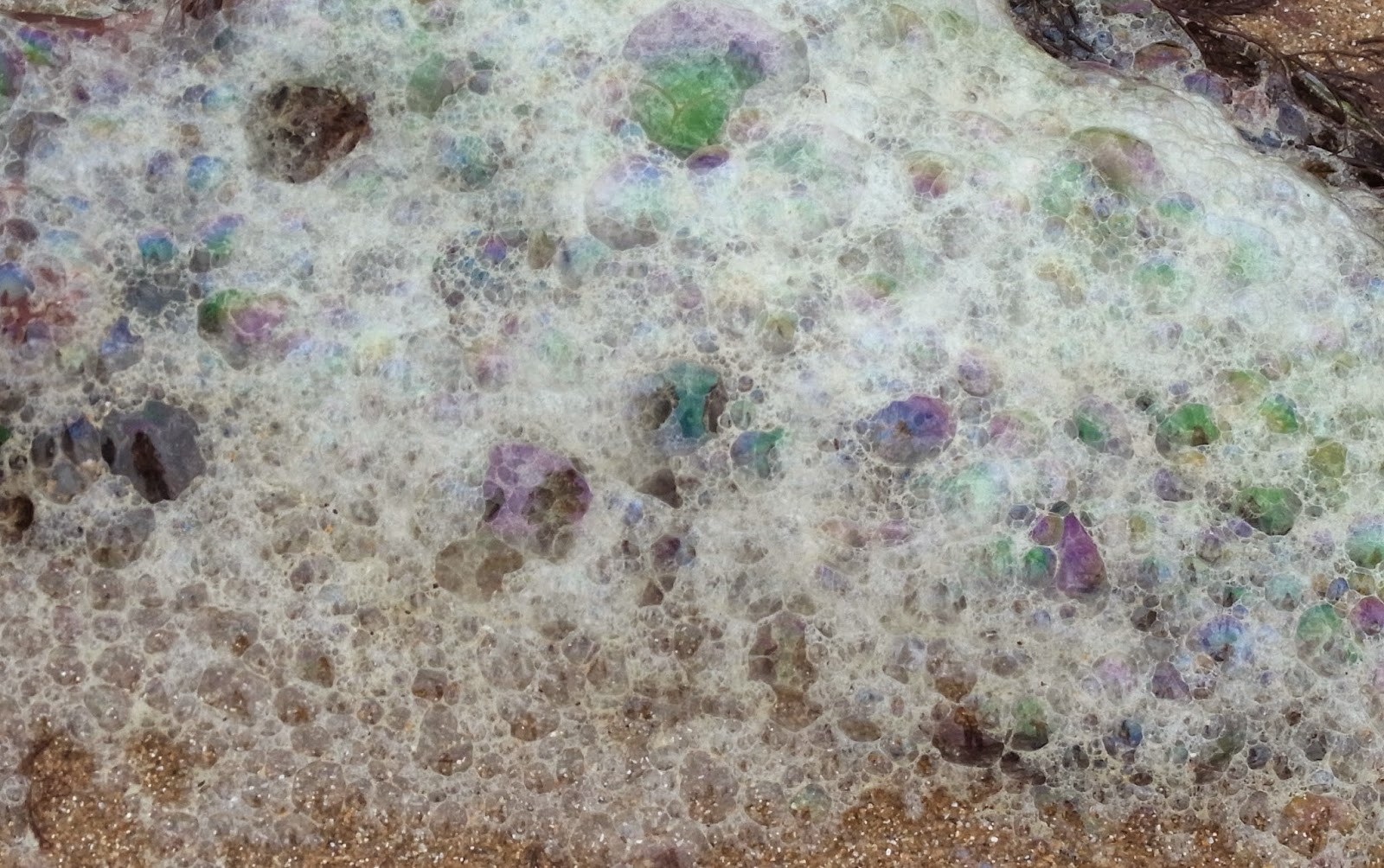 There are some beautiful colours in the seaweed washed up on the beaches, and I have been photographing a few of them. The vividness of the colours is amazing, the bright, bright greens and rose red seaweeds especially. Such a variety of forms, it would be good to paint some of them. 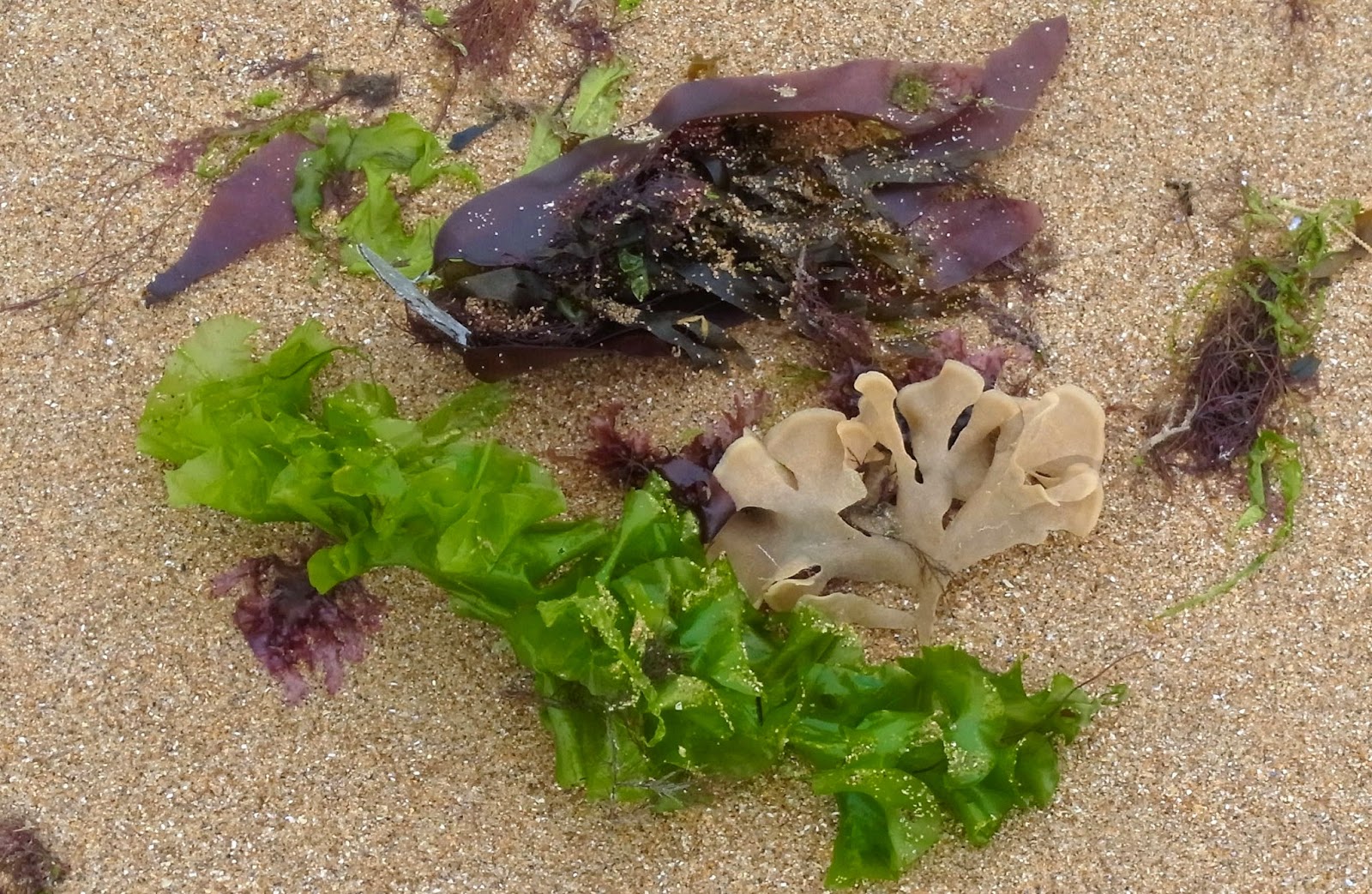 Sea foam also seems exotic and strange on the beach, like lace for a mermaids dress. It's transient nature had me photographing some at Joss bay especially gorgeous with rainbow colours in the sunshine. 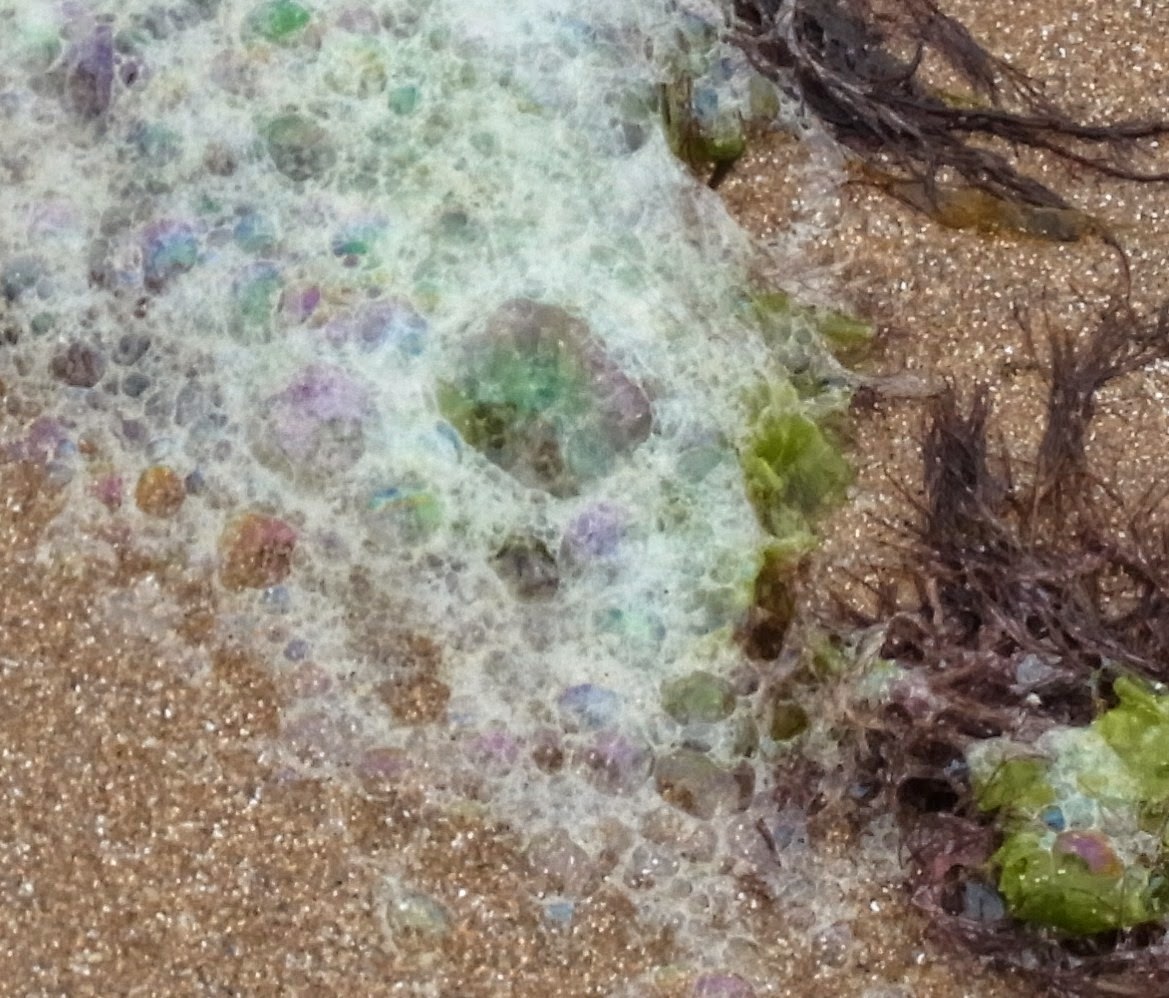 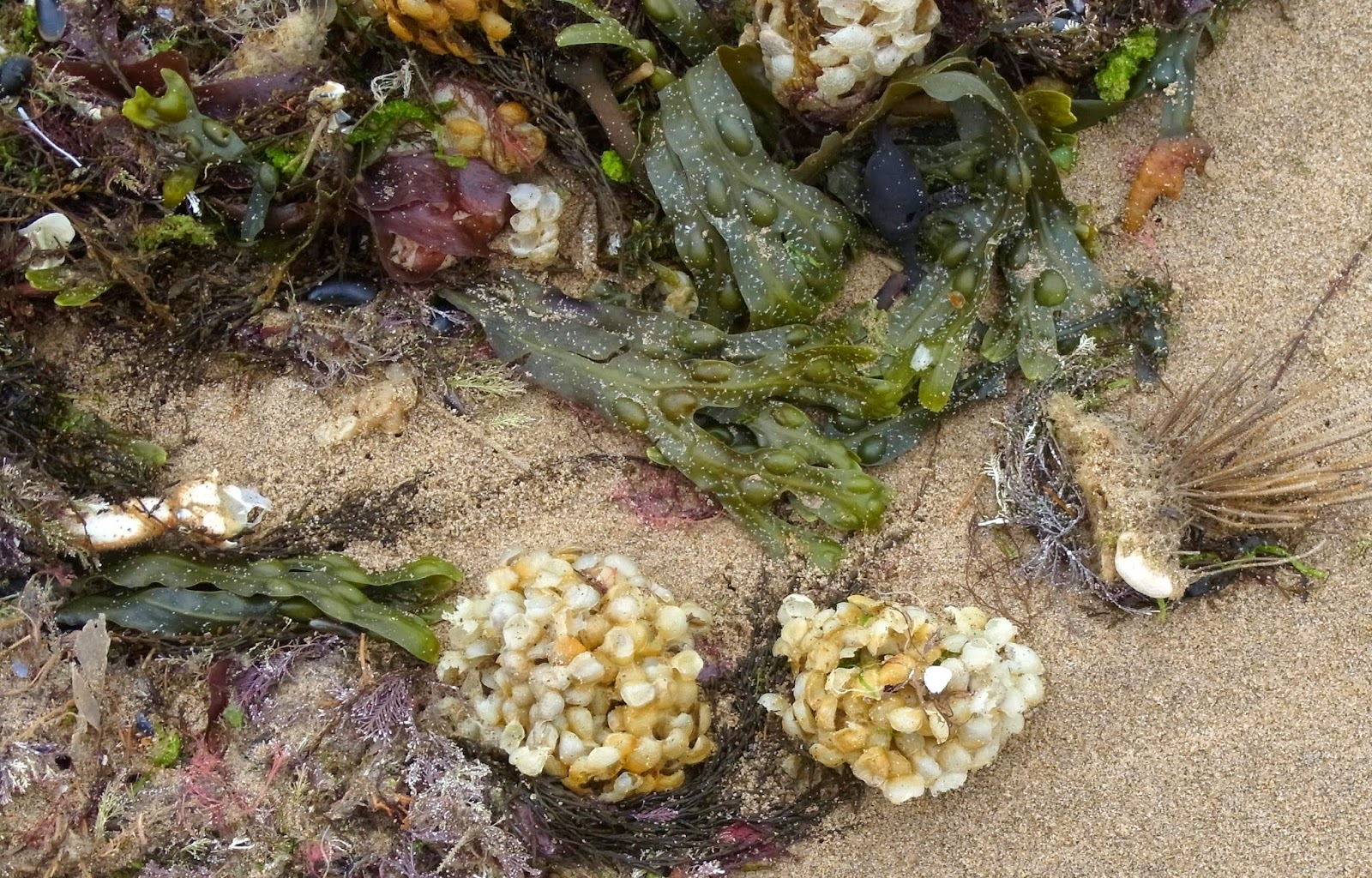 Other areas of beach are full of seagull footprints, making patterns on the beach. I liked the tyre tracks left by the tractors on the beach with seagull prints in between, looking like a strange carpet or floor. 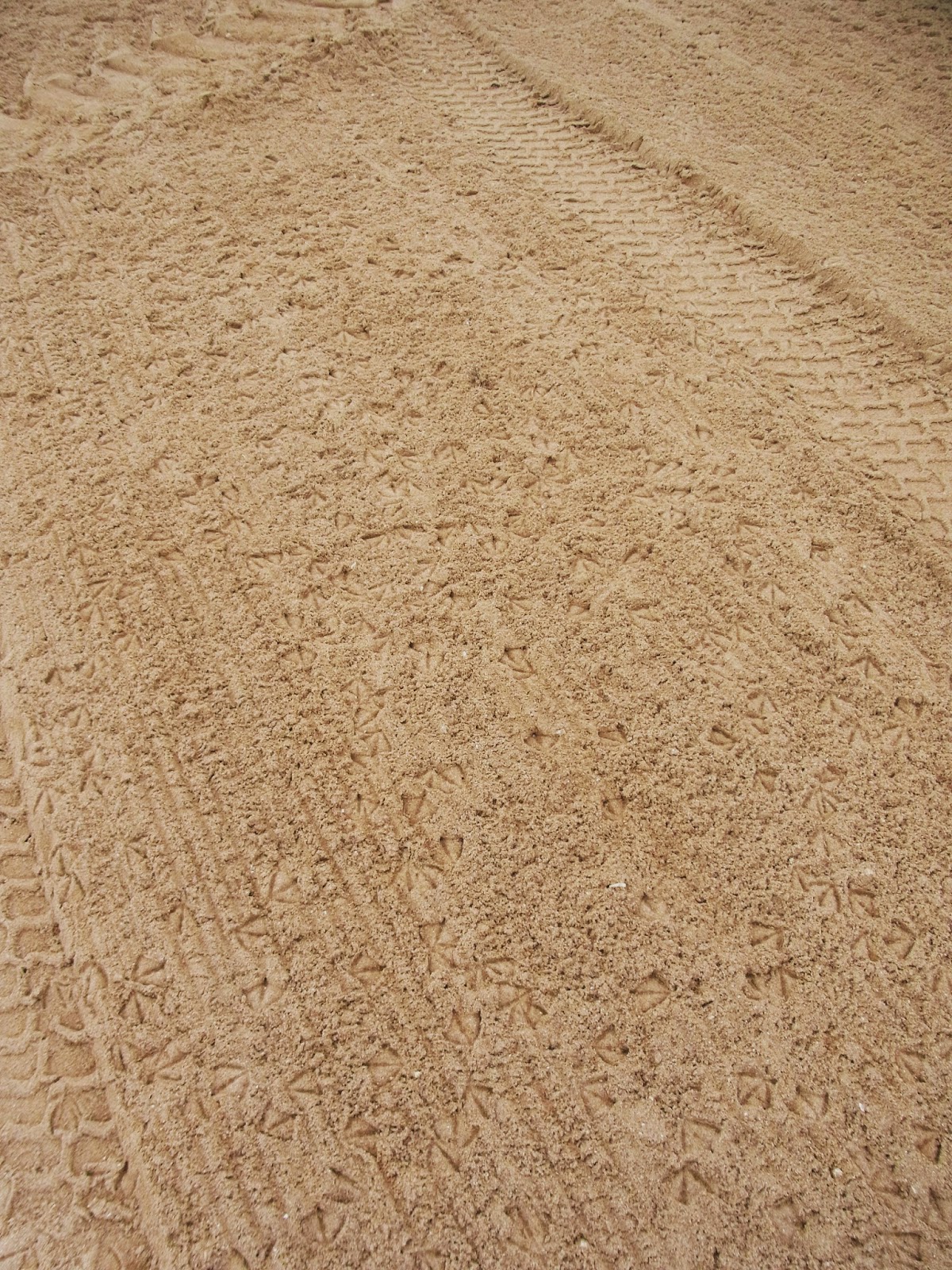 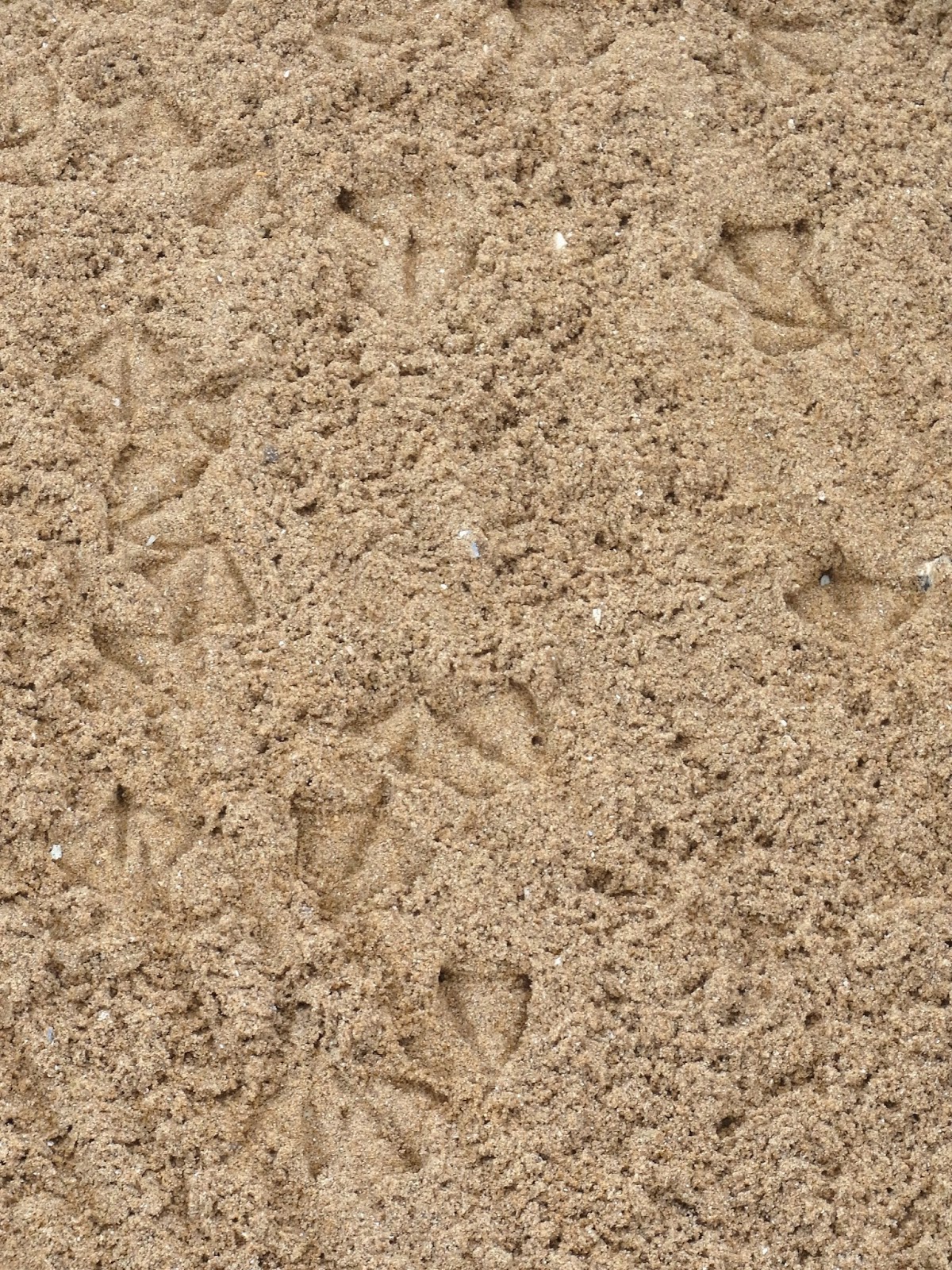 Posted by Padmayogini - Wendy Le Ber at 2:36 pm No comments:

The Folkestone Triennial is running till the 2nd of November  website here  and I've had one visit there and hope to go again before it ends. 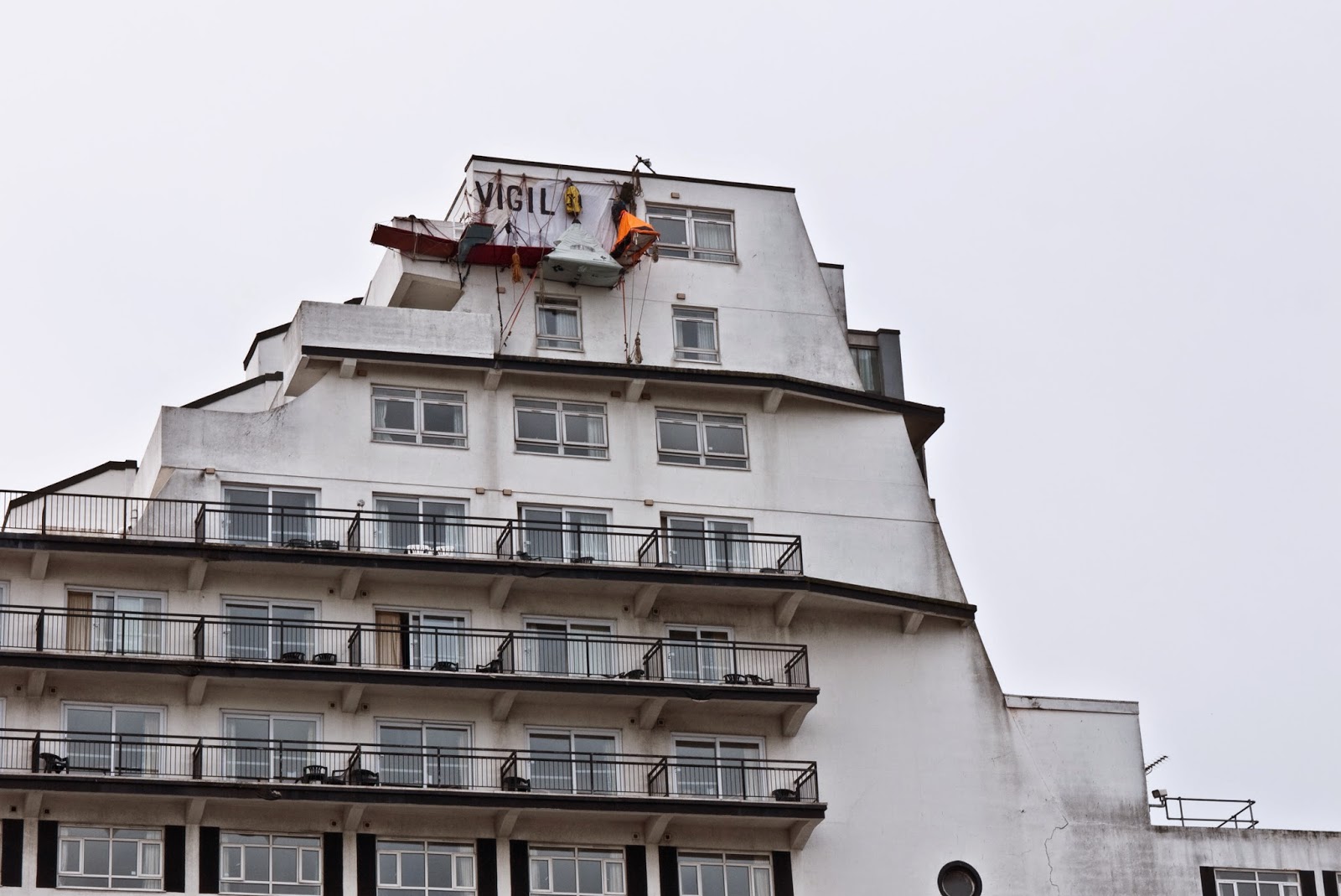 There are a range of public installations and sculptures around the town and harbour including Alex Hartley's Lookout where a vigil is taking place on the top of the Grand Burstin Hotel.  Alex Hartley's work is a temporary structure echoing the Peace and Occupy camps or those of refugees and looks out over the harbour.  Alex Hartley's website here 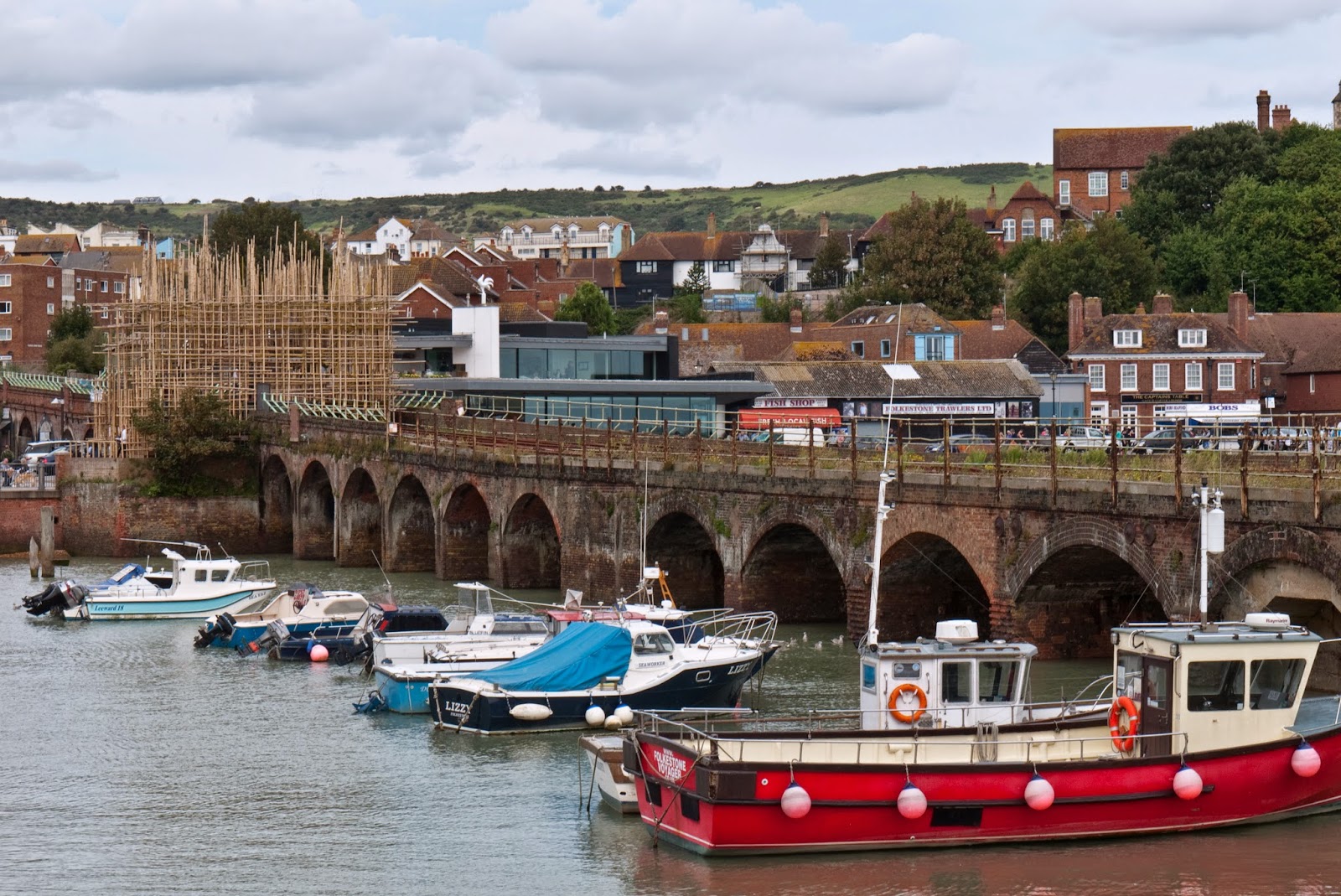 There's a daily blog from Lookout  here  A number of different people have been staying in Lookout and also writing journals and taking photographs  I have been reading Em Peasgood's journal which was honest and moving. Em is orchestrating an arrangement for steel orchestra and choir being premiered at Turner Contemporary. Her journal entries here  and website here 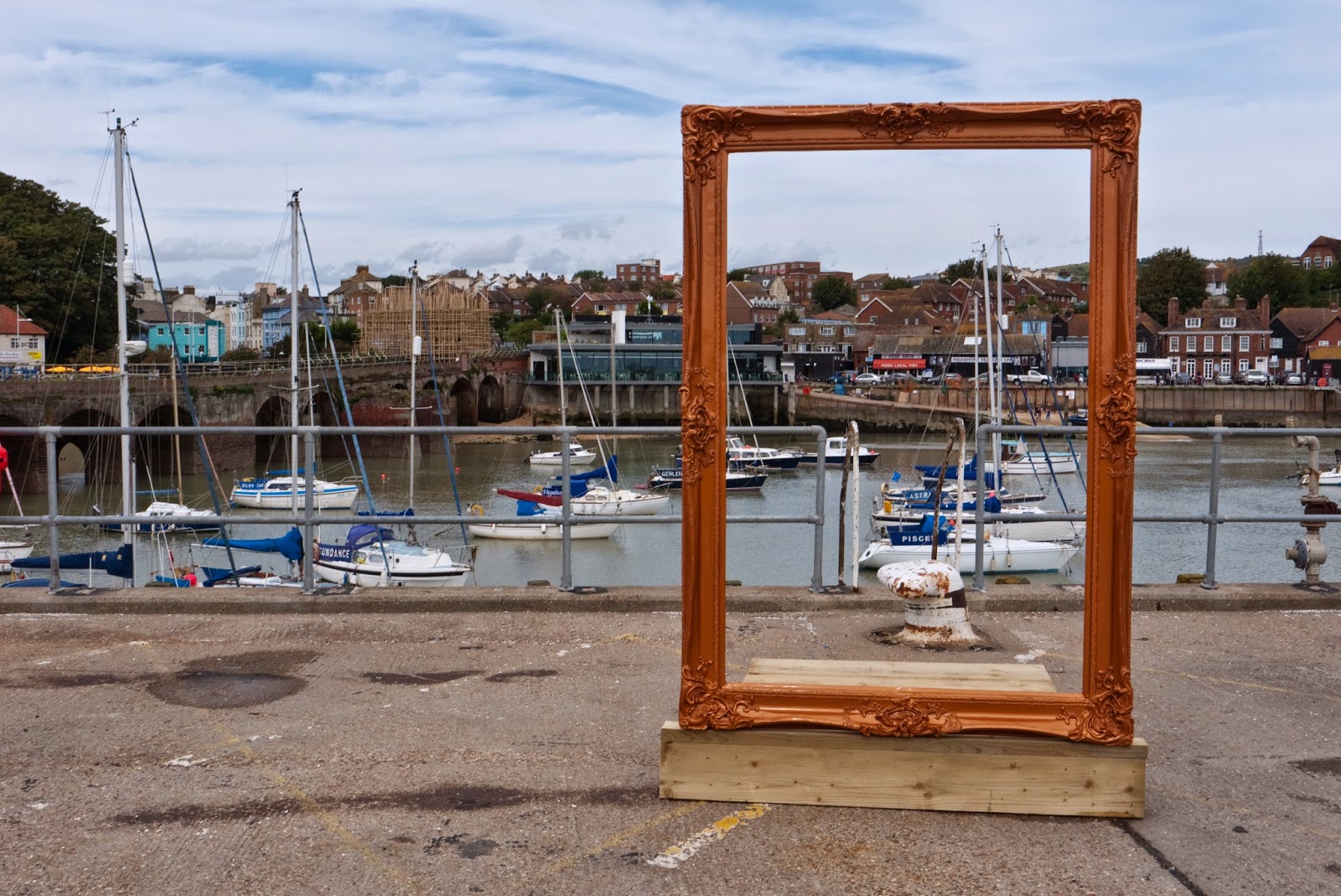 Andy Goldsworthy has also created a work with a team,using clay from Folkestone beaches. His works usually involves using materials from the environment and in His Clay Window and Clay Steps,Andy Goldsworthy uses an empty shop, where the windows and walls have been covered in this clay. 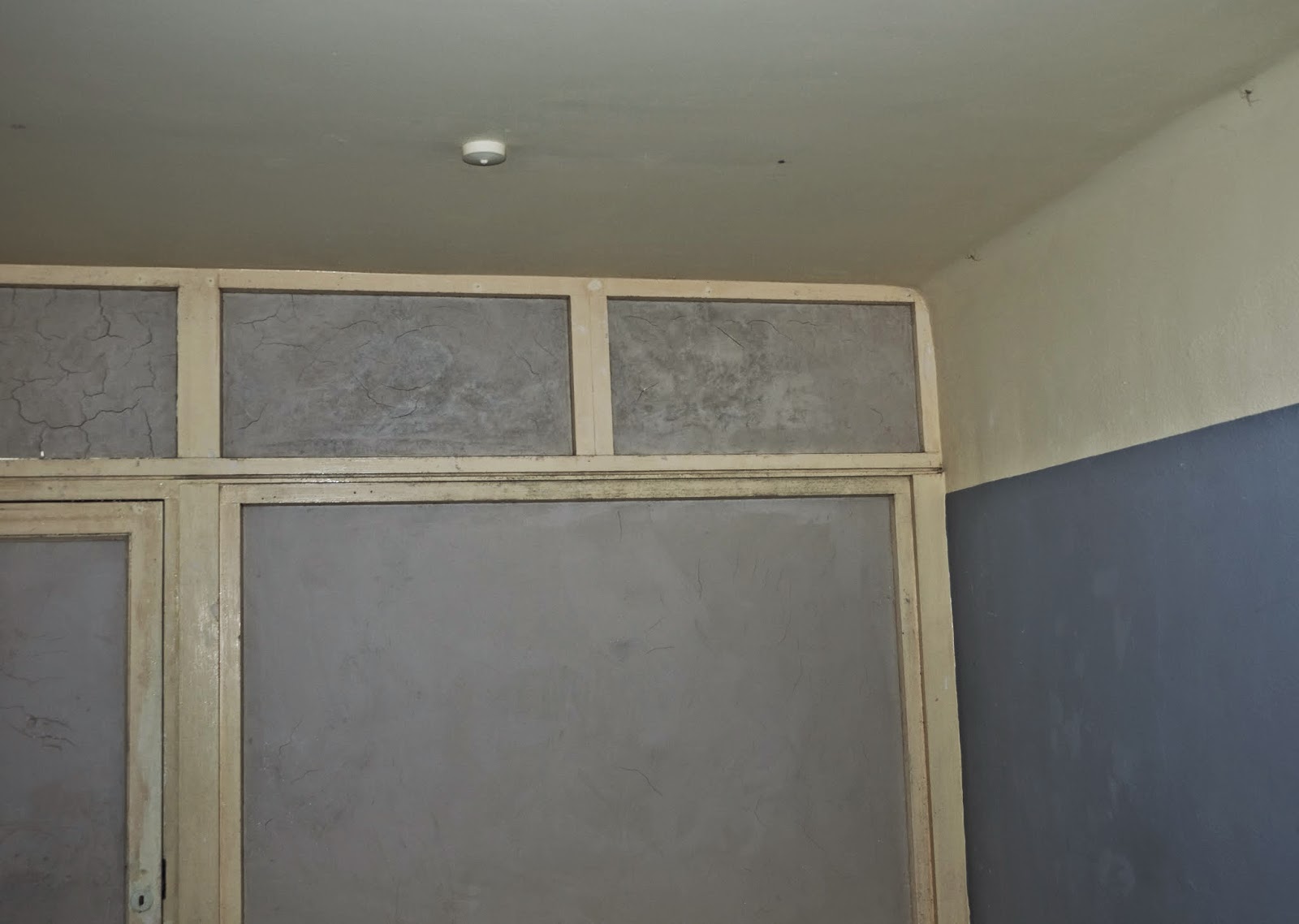 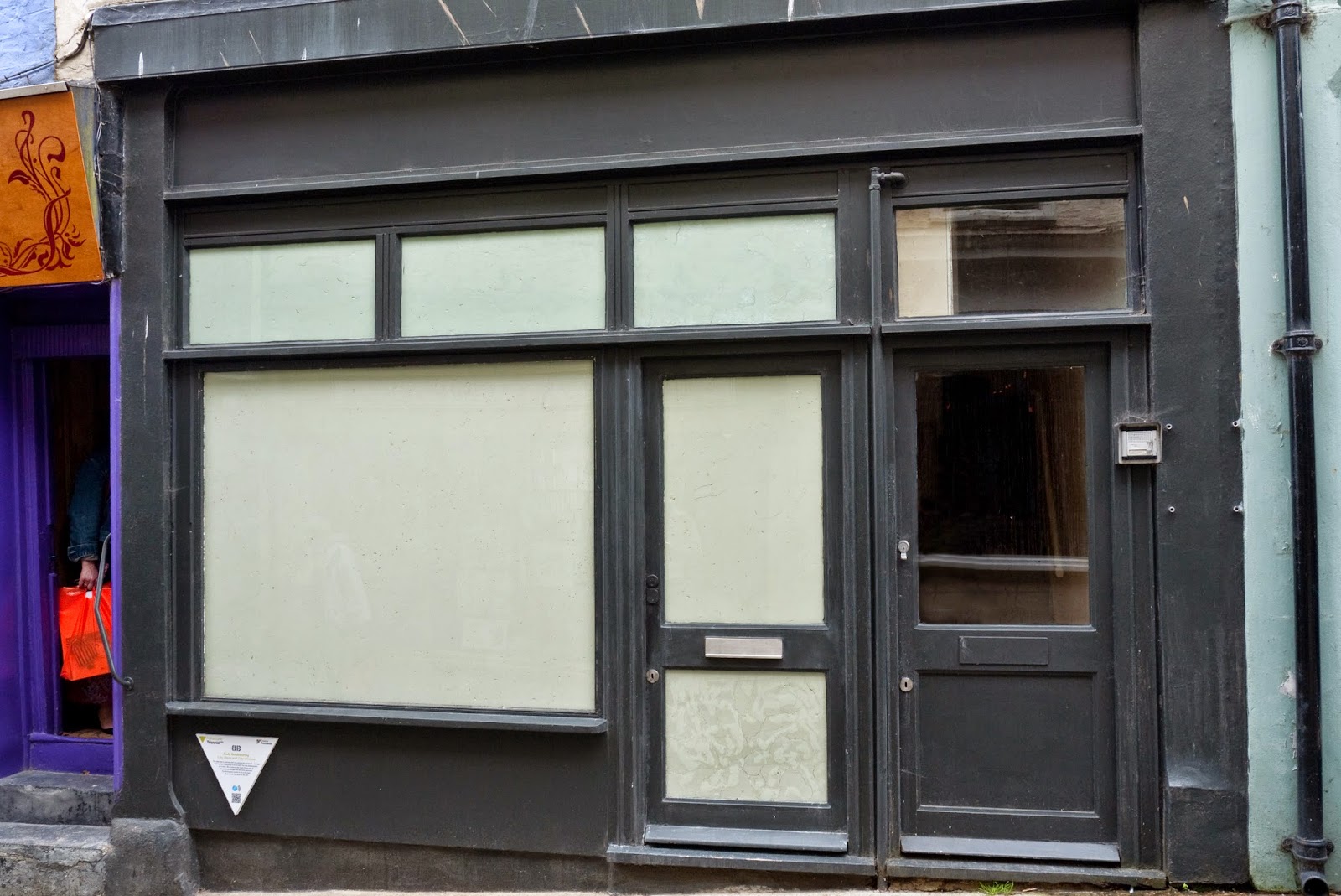 Walking in you are in darkness with the smell of damp clay around you. Slowly you become aware of the cracks in the clay on the window as the clay dries out. Info here      Some lovely photos of Andy Goldsworty's sculptural works on Melt here 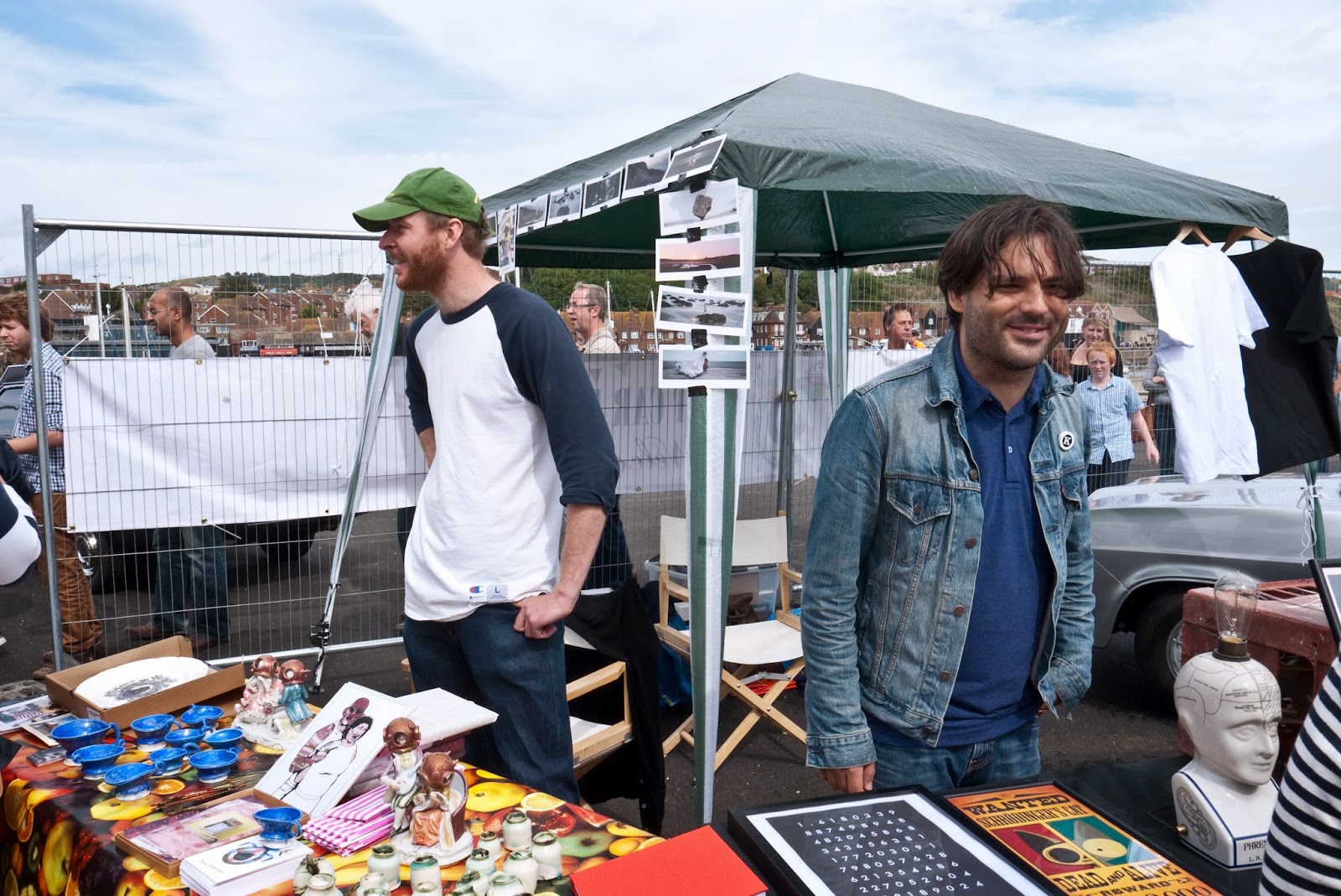 When I went to Folkestone the Art Car Boot Fair was on in the harbour car park. I have always enjoyed going to them in London and was pleased to see it happening in Folkestone. website  here 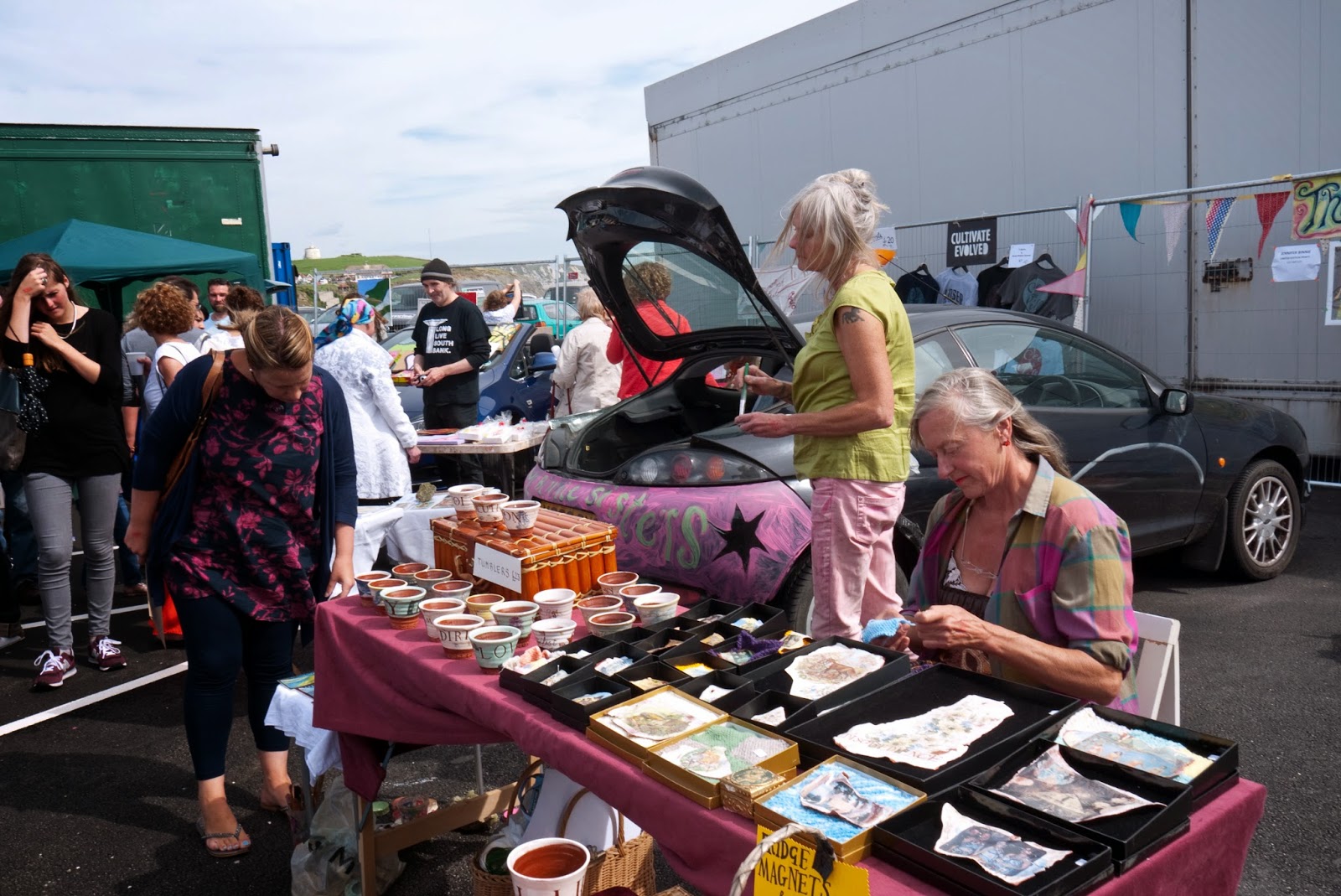 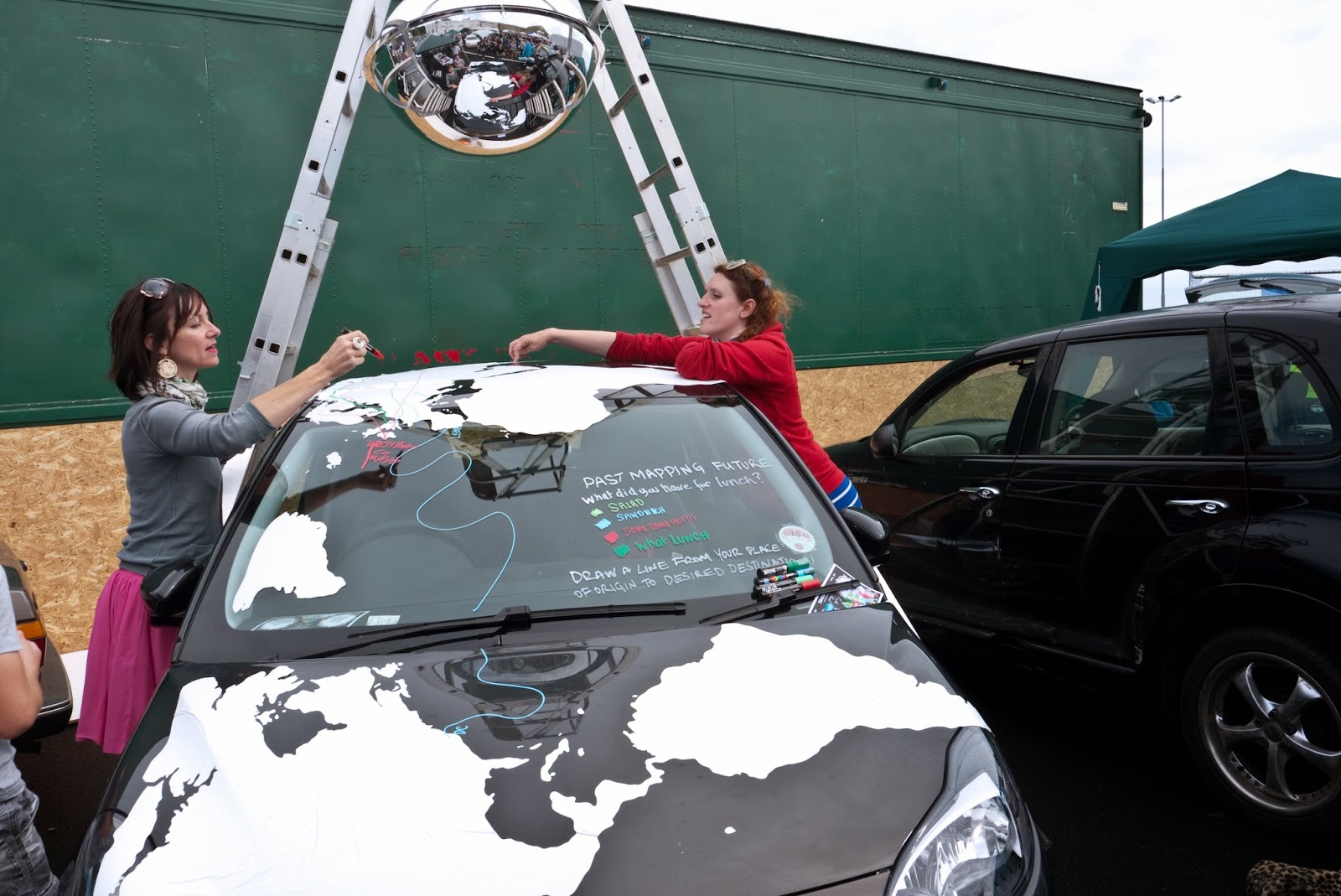 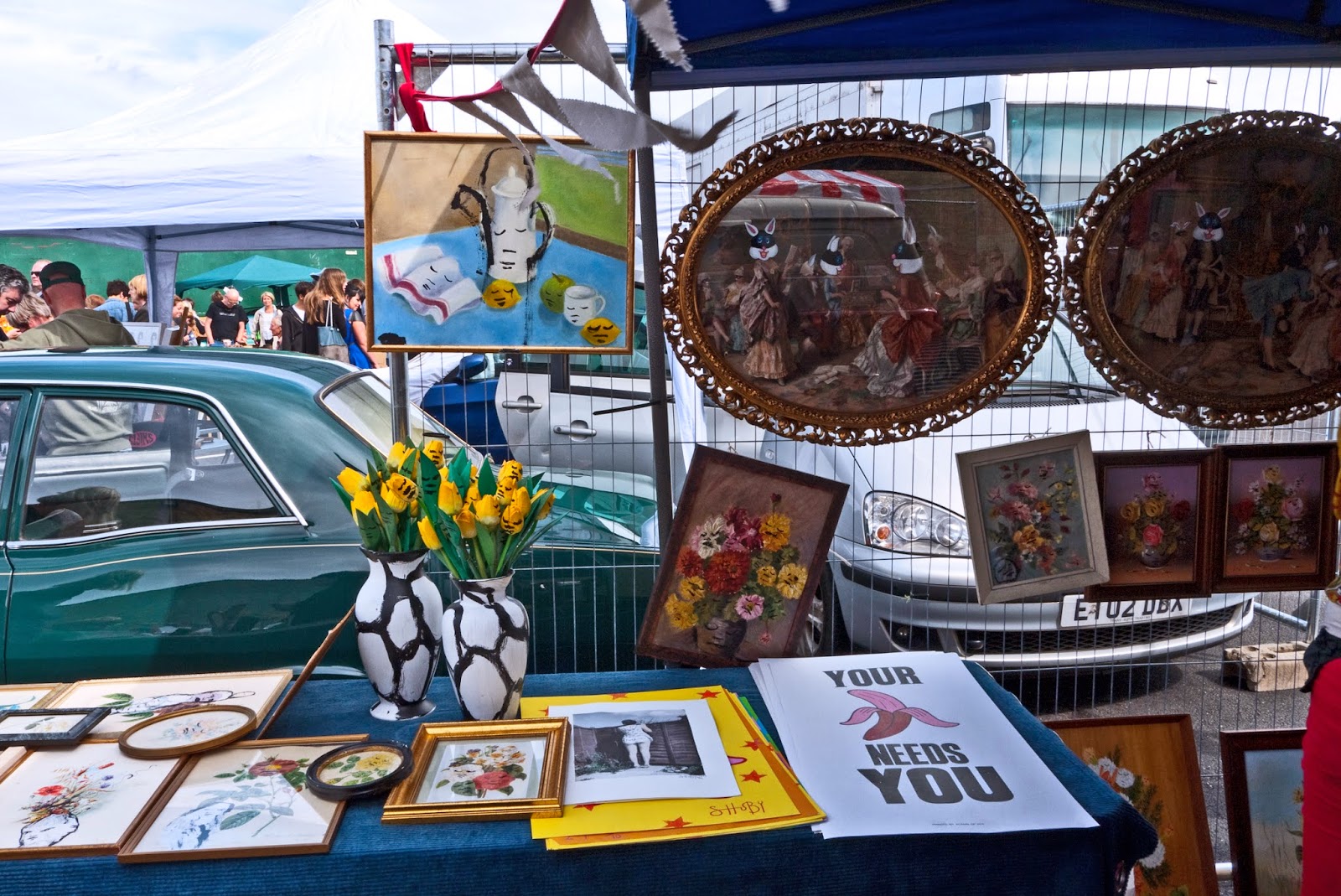 On the harbour beach people were still hunting for the gold bars that had been buried by artist
Michael Sailstorfers  info here      The tide was coming in so there wasn't much sand left, people were digging to the last though. 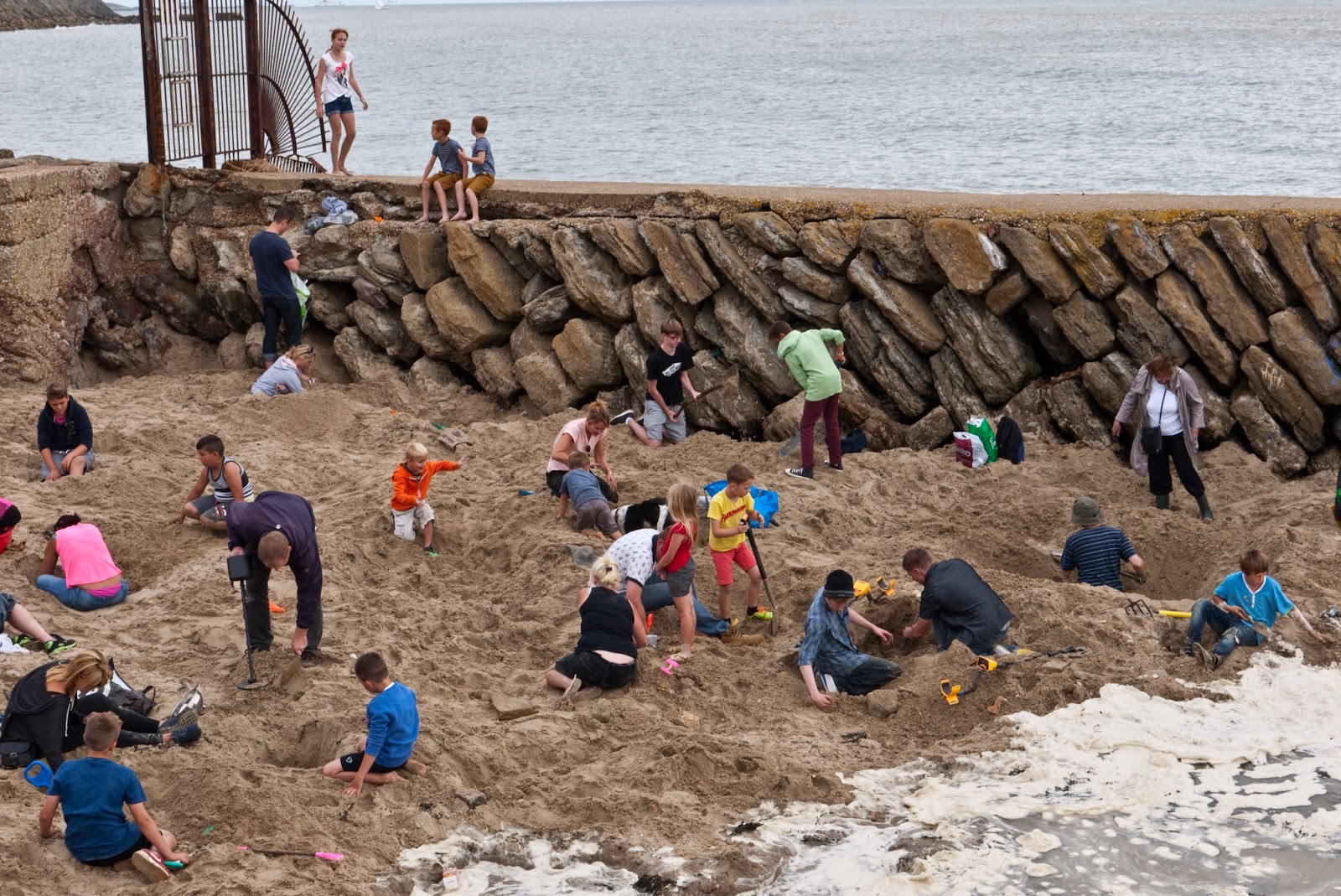 Posted by Padmayogini - Wendy Le Ber at 3:53 pm No comments: