John Stezaker and Exhibitions at the Whitechapel Gallery 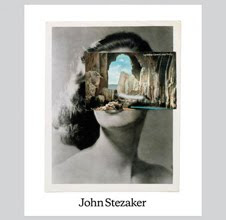 I headed down to the Whitechapel Gallery this week to see John Stezaker's exhibition of photographic collage work. I have started to make some small collages myself as cards and have been interested in this way of working for a long time.

John Stezaker had some interesting work, most of the work was based around portraits, a lot of Film stars from the past and mostly in black and white. ( Interestingly and coincidentally I had just found a series of old cinema stars portraits that I had cut out for collage work) 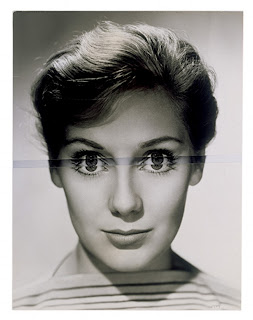 The the subtle changes of the eyes ( an extra piece of an eye infilled in the face) in the old Hollywood portraits Love series, were enough to be slightly disturbing and made me think about the power of the eyes between people who are in love.
Other portraits had the faces obscured by vintage postcards, in the Mask series, some were more effective or clever than others in echoing the face in some way, by the features in the landscapes, bushes becoming hair, landscape features becoming noses for instance. 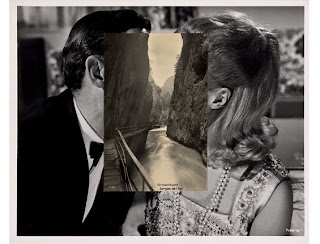 I liked the portraits where the whole silhouette was filled with another subject like Shadow Third Person series where in one image blue sea became sky and a mountain landscape filled the figure.

The exhibition did give more impetuous to carry on exploring my own collage work and to include more of my photographs in the work.

Other exhibitions in the gallery included Richard Wentworth's Three Guesses pieces of red thread were hung from nails all around the walls and an old fashioned cabinet of threads stood to one side. 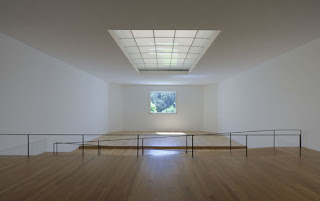 Upstairs in the main gallery artist Bethan Huws conceptual installation had raised a large part of the gallery floor, to change the space. The new floor matched the old floor (except for it being newer in colour) and looked like a platform had been put in for a performance perhaps, most people walked in and out not seeming to take much notice.
I'm not sure how much it worked to change our experience of the space, though it was meant to alter it subtly apparently.
In the smaller space there were wall texts describing some of Duchamps work and Bethan Huws interpretation of them.

Keeping it Real by Mona Hatoum was a large installation made of wire cages filled with light bulbs that went off and on, the sound of the electric currents being amplified and played in the room. A disturbing piece in some ways, with echos of prison, confinement and threat. 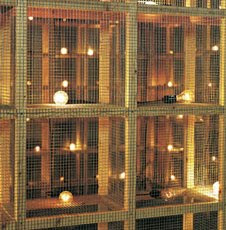 The Bloomberg Commission, Claire Barclay's Shadow Spans, was another installation/ sculptures that filled gallery 2 downstairs. Door and window frames were draped with fabric printed with bricks, abandoned, plant pots, hats, gloves and other seemingly abandoned objects were strewn around and fixed to the frames. It was a bit like seeing into a dream like vision of a disaster area without the really bad stuff. Apparently Claire Barclay's work" suggests the transition point between interior and exterior spaces, as well as hinting at lives behind closed doors". 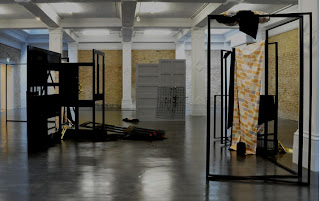 Posted by Padmayogini - Wendy Le Ber at 6:24 am No comments: 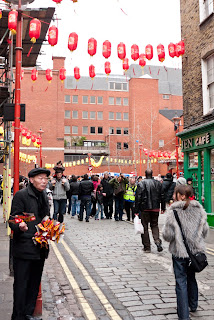 Sunday saw the annual Chinese New Year celebrations around China Town, Soho and Trafalgar Square. After being caught up in a rather scary crush in some of the narrow streets last year, I went primarily to Trafalgar Square. 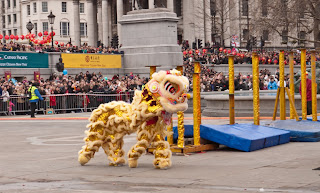 I think there even more people this year and it's estimated over 300,000 people celebrate the event. Trafalgar Square was packed as were all the pavements and streets around, red lanterns were flying everywhere and stalls were placed around the square. There was the usual stage set up near Nelson's column and various dignitaries made speeches before the firecrackers were lit. The noise was spectacular, made to drive away negative forces for the start of the year of the rabbit. 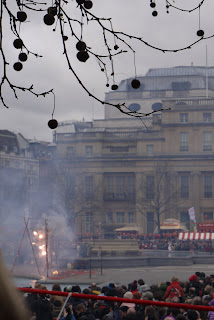 I was interested in the ritual of dotting the head of the dragon masks, to call in the spirit and bring it to life, and the painting of the eyes to awaken the dragon before the dances began.

A Dragon Dance team from Hong Kong started the dances on poles, very acrobatic, I had found a space in the square to see them which was great and take some photos, and I stayed long enough to see a Mongolian dance group and a singer from Tibet, singing a very evocative song about the land. 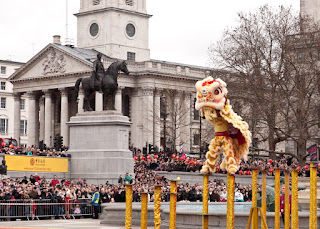 Posted by Padmayogini - Wendy Le Ber at 8:21 pm No comments: