Just over a week ago was the artists car boot sale at the Old Truman Brewery in Brick Lane East London.I took a walk down Brick lane, from the Bethnal Green end, I hadn't been down there for a while and the area was heaving with people. I had't realised how popular the place had become.

The market space had extended to include people setting up "shop" on the pavements all the way up to Bethnal Green road. A few CDs, books or clothes usually made up the stock, with the odd broken bike or bits of electrical gear

Down Brick Lane there are plenty of designer/maker shops and the famous 24 hour bagel shop that I had to stop at on the way down, recommended.I had my digital and SLR cameras, still some what challanged by the fact that the only instruction book I can find for the digital camera is in French!

I and some of my friends have been thinking of an artists car boot for a while, but more like clearing out our studios, selling pictures, frames, materials ect that we're not using anymore, At this car boot it was more a case of artists selling cheaper multiples and having some fun.

In Gavin Turks case it was Rich Tea biscuits in perspex boxes, I could,nt quite bring myself to spend £25 on one. I wonder if there are any for sale on e-bay yet? I did actually like a lot of the stuff though. the glitter domes made in all kinds of bottles and glass containers, with plastic figures like a farmer and cows by Richard Glegg. If I'd had the money I would have bought one of those. 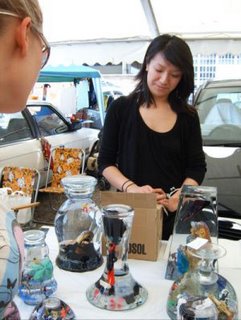 I don't know his name, but I liked the wit and inventiveness of one guy with his boot filled with oranges. They were 50p each with a free photograph( of an orange artfully arranged in a variety of settings. I went for two of those, very tasty oranges, and presented in an orange plastic bag.When Ruth gets back from France I'll get the first pictures up.
As I somehow managed to turn the audio feature of the digital camera on at some point and could't seem to turn it off,! most of the photos will be the old fashioned ones at a slightly later date.
I did however buy a mug, the one with the skull design from Sarah Lucas and Oliver Garbay, signed by them both, they seemed to be doing a roaring trade, there was a lot of the skull type imagery around as well as swear words on badges and goth type images.
It was very hot so I resisted the invitation to squeeze into a saloon car for a performance, but the people inside looked like they were having fun.

I liked a lot of the ideas there and the wit, and I came away with ideas, I was'nt sure what the car with all the black boxes was about, I didn't stop to find out, lets have more artists car boot sales anyone else up for that?
Posted by Padmayogini - Wendy Le Ber at 8:35 pm No comments:

I've had a few days retreat at the Seekers Trust in Kent. Staying in a little single flat within their peaceful gardens. I was experimenting, using my digital recorder to record the birdsong and sounds of the place. I might be able to sort out the technology with Ruth and put a sample on here later.

Birdsong seems such an incredible thing, the variety of notes imitating sounds, texture and power, literally the volume od sound that can come from a tiny bird. The dawn chorus was rather mre muted than it would have been a few weeks earlier, but the weather was better, a bit of sunshine and blue skies.

I read some new books, meditated, did some sketches & water colours, got in touch with the more angelic realms and did some work on possible book ideas. All very positive and creative and left me very happy. 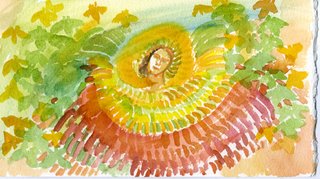 Posted by Padmayogini - Wendy Le Ber at 3:21 pm No comments:

I was lucky enough to have a ticket to Chelsea Flower Show on Saturday. It was lovely to be there, the rain held off while I was there, with my sister and daughter. We were early enough to get to the front of the show gardens and the Daily Telegraph Garden, which won best in show, was really lovely. The planting of Iris and purple and white flowers gave the garden a certain spiritual air, very uplifting and serene at the same time. I took some photos with both the digital and SLR cameras. A couple of digital pics are below. 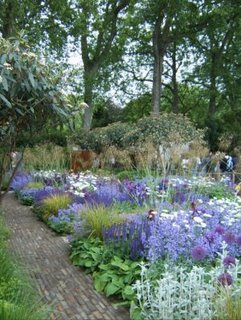 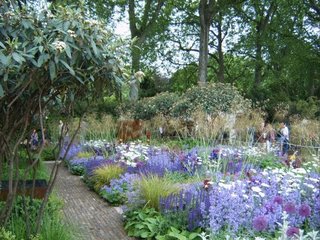 Perhaps it was the contrast from fairly cold, wet weather or the busy London streets, or the fact that I haven’t been in the countryside for a while, but I felt myself drinking in all the colour and beauty of the plants and flowers. A real tonic. As my sister said there’s something about being surrounded by beauty everywhere, highly recommended.
Posted by Padmayogini - Wendy Le Ber at 9:19 pm No comments: