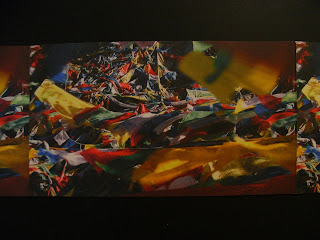 On a very wet and windy morning I went out to find the Parasol Unit Foundation for contemporary art. They are showing a selection of Darren Almonds work till 30th March, and I wanted to see his film In The Between. It is a 3 screen piece filmed in China and Tibet. The central screen shows Tibetan monks in Samye monastery the oldest monastery in Lhasa, at practice, chanting and sounding traditional instruments. The other 2 screens either side are showing prayer flags, views from the bullet train window of the new Chinese railway that runs across the highest plateau in the world,from China to Tibet and shots of the train.

Unfortunately this railway has been put through without consulting the Tibetan people, or looking at the environmental aspects of such a huge project. This railway, which the Chinese want to extend, strengthens Chinese military and political grip on Tibet. So I watched the film with a sense of profound sadness, is all the potential destruction of Tibet and it's people inevitable?
Posted by Padmayogini - Wendy Le Ber at 4:35 pm No comments:

Work in progress and reflections in Docklands.

I've been thinking for a while about how to put 2 layers of photographs together, revealing one layer under another. It's often a case for me of finding the right tools, perhaps using something that is usually used for another craft. I know it can be done digitally and I want to have ago at that too, but I also wanted something more tactile, some piece where you could physically see some of the image underneath as well.
This photo, 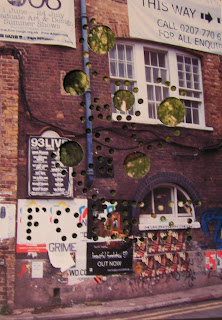 is work in progress/idea for other photographic work. The top layer is a photograph of buildings in Brick Lane, and I wanted to contrast the urban scene with what would have been there many years ago, forests or trees.
I was cutting fairly random circles here to look at the effect, the greenness of the trees underneath or behind the buildings. Something about memories of the past, impermanence/change, what trees bring or create with their presence. 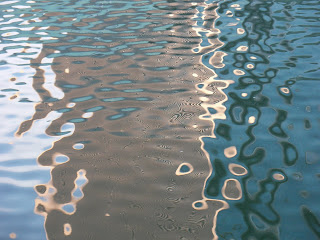 Walking along the old docks, near Canary Wharf, brilliant reflections in the water near dusk. One lone Coot came swimming along and climbed out to peck at the stone steps. 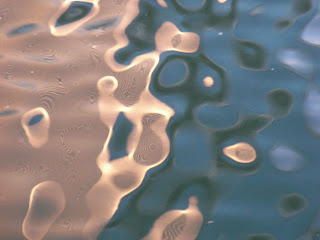 Posted by Padmayogini - Wendy Le Ber at 5:47 pm No comments:

Cecil Collins, new pastel and visitor to the bird feeder. 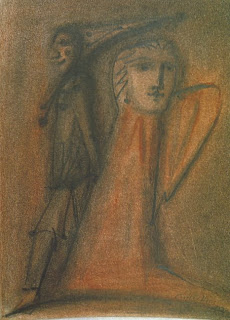 On Tuesday I was delighted to see a documentary film about Cecil Collins, it was shown as part of the Temenos programme. I have appreciated Cecil Collins work for a long time, his visionary sensibility, use of symbol and colour. I did not know that much about him however. This year is his centenary, so there are a number of events lined up, which is great.

I was interested in some of the ways he worked, sometimes planning his paintings in his head apparently, turning over the picture in his mind over some time. The danger in this way of working, that of having done too much and then no longer being interested in actually producing the painting. Collins wanted that moment of surprise when he looked at his finished work.
Another way he worked was to take some colour and allow himself to work with that colour intuitively, the forms arising as if taking birth.

For Collins his work is concerned with the transformation of consciousness. Life he saw is surrounded by mystery, "we are asked to collaborate with mystery" I bought a lovely book of his work, Cecil Collins, Meditations, Poems, Pages from a Sketchbook, by Brian Keeble and Elizabeth Collins. 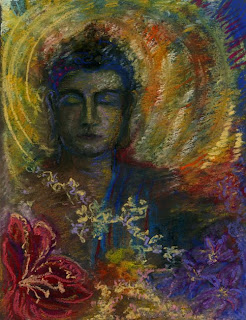 I've also been working on some new pastels, one here of the Buddha, they are a bit more difficult to scan in even sprayed with fixative the surface is delicate. I need a few more skills in taking good photos of my art work.

Looking out of the kitchen window last week, I saw something on the bird feeder, a funny looking bird I thought, on closer inspection it proved to be a mouse who stayed long enough for me to get a camera 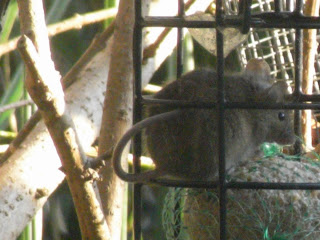 Posted by Padmayogini - Wendy Le Ber at 8:36 pm No comments: