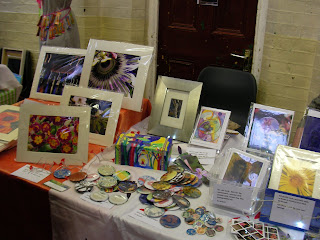 I took part in one of the E17 Designers events, for the first time last Friday. I took my cards, the new eco cards as well, photographic prints, badges and mirrors and my new sticker range. I enjoy looking for new ways to use my images and the stickers are made up of dozens of my photos.

The Fair was very good, excellent organization, live music and wine all adding to a great atmosphere. The range of items people were selling was a good mix, and there was a wealth of design talent on show.

Getting out and meeting people with my work is always enjoyable. feedback is really important and I have a bit of a market girl in me. I will definitely be attending the next event in July at the Green Fair.
Posted by Padmayogini - Wendy Le Ber at 3:27 pm No comments: 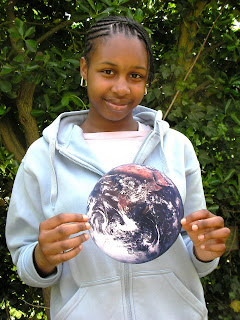 My collaborative pieces called In Our Hands as part of the exhibition DecarbonART are up at City Hall.
I have been working with some young people on some collaborative pieces for the exhibition for some months. The theme was around climate change, the environment and the planet. We worked on 3 canvas pieces using collage and mixed media, including glitter and gems. It was a piece celebrating the animals, plants and other forms on earth, as much as noting the dangers we all face. 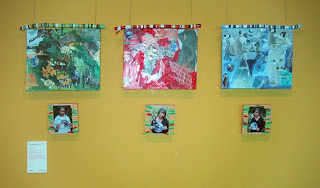 There were also 3 photographic prints of the teenage girls who worked or were part of the art work, holding an image of the world in their hands. The prints were mounted on wood and around each photo were names of extinct animals printed on coloured leaves.

Unfortunately we may not be getting our private view now as the exhibition was planned under Ken Livingstone, now Boris Johnson is in City Hall it seems he is not so keen on the planned exhibition, we were lucky the exhibition went ahead apparently.

Outside City Hall It was busy with visitors and the sun was shining, I took some photos with the theme tourist in mind. 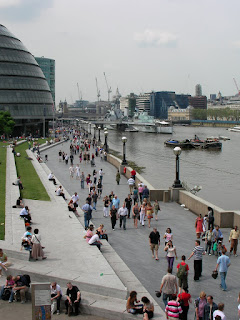 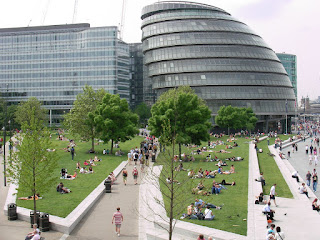 Posted by Padmayogini - Wendy Le Ber at 2:13 pm No comments: