As part of the Walthamstow Festival this year some members of the local arts club have pieces of work in the windows of BHS, which is part of the shopping centre. I have one of my photographs of Epping forest, " A path through the forest " up there. A couple of photos here. 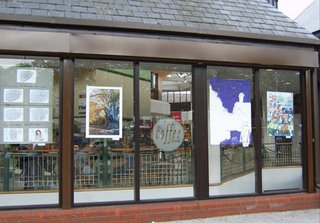 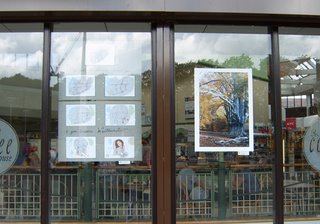 This weekend is the second of a course about contemporary book art at the Tate Modern. It was really good last weekend, we learnt basic bookmaking skills with a very patient and enthusiastic Tracey and went around the gallery looking at work with the very knowledgeable and lively Liz.

I have been working on ideas for the book that I will be making over the weekend and am pleased to have found another art form that I can add to my practise. Look out for book art on this site very soon.
Posted by Padmayogini - Wendy Le Ber at 8:31 pm No comments:

I went along to the summer exhibition at the Royal Academy last week, it was their late opening and the weather was warm rather than the heatwave of late, a lovely evening to be in the city centre.
I took a few photos of the sculptures in the courtyard, the Damien Hirst The Virgin Mother I did quite like, the Untitled Red/Brown painted timber lengths by Phylida Barlow didn't do a lot for me, but the granite Warts And All by Peter Randall-Page looked good, particulaly with the water fountains around it. 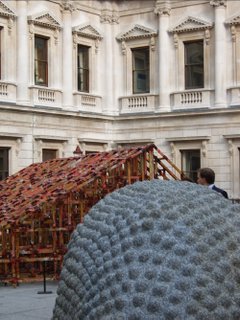 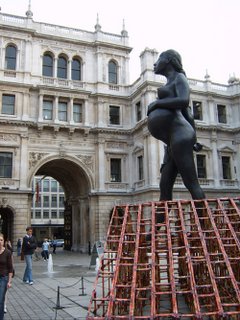 Inside I had one of the lists of works and went round making a note of what works had sold, what a bean feast for the R.A, an awful lot of the works had sold, I wonder how much commission they will end up making? I could have a go working it out and make a new piece of work about it.

In some rooms all the work had sold and with the prints a number of editions had sold out and some were 50 to 100 editions. I can see why artists want to get into the Summer Exhibition, I'll have to try next year! Actually I was really pleased to see all the work that had sold, it is hard for most artists to sell work, and it showed that a lot of the more general public must be buying art as well.

I made a note of some artists that I liked, to look them up later and I must admit that I was tempted by some prints including some by Christopher Le Brun, who works with mythical themes But there is no money for that at the moment maybe when I sell a lot of work........
Posted by Padmayogini - Wendy Le Ber at 4:30 pm No comments:

Ruth has been working to get some audio available to download from this site, I am excited about this new possibility. For the moment it is an MP3 of some of the Dawn Chorus from my retreat at the Seekers Trust in Addington. I was walking in the woods and down the lane from about 4am till 5.30am really enjoying the birds calling and singing and the pale sunlight and slight mistiness among the trees. One of the large Lime trees seemed to be alive with birdsong I wondered how the tree must feel to be vibrating with the sounds.

I went out at other parts of the day as well recording walking down to the bus stop and at sunset, with just a little digital recorder, more downloads hopefully in the future.

I have also been out and about taking posters and leaflets about our workshops in the Autumn, still a lot more publicity to be done. Balancing the business side of my work and actually painting ect with my spiritual practise and home, friends and family, is quite an art. I haven't managed it yet.
Posted by Padmayogini - Wendy Le Ber at 4:13 pm No comments:

The Morning Glory flowers from one set of seeds have been amazing this year, they are the deep purple/blue ones. We're waiting with growing anticipation for the other varieties to show their colours amid the luxuriant foliage, in other words they are all leaf and no flowers at the moment.

A couple of pictures here, I really like the semi sci-fi appearance with the pale white centres of the flowers allowing the light to shine through. 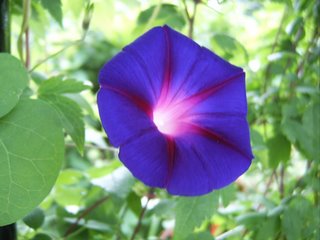 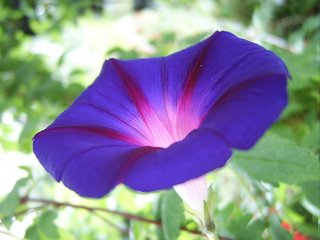 Other work over the last few weeks has been finnishing some more of my zodiac series of paintings. I have finnished 6 at the moment, the latest 2 here, Aries and Pisces. I have also been painting a variety of small boxes, some of which have spiritual connections or uses, and will be part of my exhibition in September. 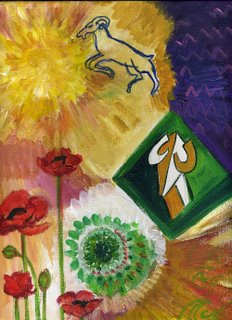 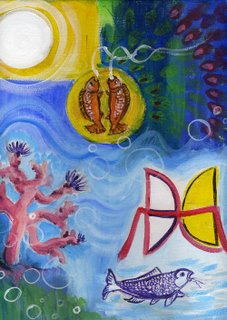 Getting into the painting of objects made me contemplate buying a high backed chair from a junk shop, but the reality of a tiny flat without a spare room came to mind and I resisted, for the moment!
Posted by Padmayogini - Wendy Le Ber at 3:56 pm No comments: