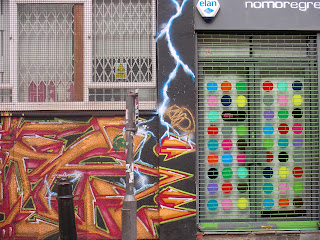 I have been very busy getting photos ready for the Photomonth Photofair that I'm having a stand at tomorrow and Friday the 16th and 17th October 10am till 5pm.

It's a new event for Photomonth and I thought it was worth applying for a stand, there is a lot of publicity for the event and a lot of shows. I'm going to show a mix of work, London urban scenes and the natural world, prints and some cards. I have had a bit more tuition with photoshop and have been drawing on some of my photos of the moon. 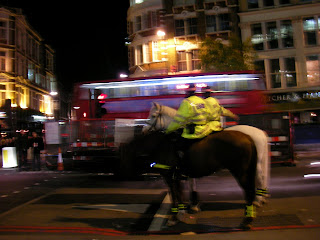 This week is the big one for art fairs, Zoo, Frieze, Scope, etc, I haven't managed to get to any over the years yet. I was interested in the idea of the Free Art fair, where all the items in the exhibition are given away at the end. It seemed last years event had ques of people waiting for a chance to get one of the pieces.

I don't think I'll have ques of people at my studio giveaway, I'm also giving away for free a lot of paintings and studio stuff next week in my studio clear out. It was quite good going through all my old work, some from 25 years ago. It was time for me to let some work go, so I sorted out a large pile.
Posted by Padmayogini - Wendy Le Ber at 6:20 pm No comments: 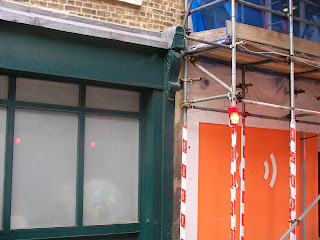 This month I'm having a stand at the Photomonth art fair at Spitalfields market. Thursday and Friday 15th and 16th October. I have been preparing work for a while alongside finishing my paintings for the previous exhibitions.There are two main themes, urban images, street art, street scenes and the natural world.

With a bit of extra tuition I have also been using photoshop to use drawing with some photographic images. I am quite excited about this, although they are my first attempts I can see a lot of possibilities. Although I think my ideas may be well ahead of my skills and even digital technology at the moment 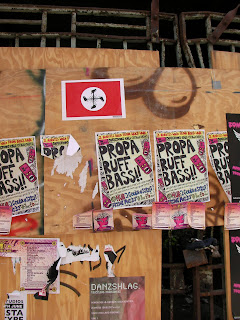 Hopefully I will get chance to see some of the exhibitions listed as part of photomonth this month.
Posted by Padmayogini - Wendy Le Ber at 1:42 pm No comments: 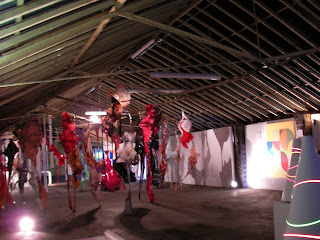 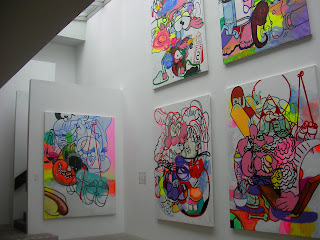 I went to some of the art events at the new Concrete and Glass festival in Shoreditch last week. I didn't make the openings, but wandered around the streets finding a lot more galleries than I thought were there before. I knew around Hoxton was becoming the East End art gallery area, but hadn't realised how much was there.

The old Shoreditch Town Hall basement has been used for a while, I found the un-modernised, dark and creepy space very interesting visually went I had been there before. This time a lot of the exhibition, Heart of Glass. was suitably unsettling to match the venue.
There was an atmospheric installation of steam, generated and blown into minature tornados, by Alistair McClymont, a disturbing horsebox piece that featured sounds of agitated horses, screaming and seemingly trying to kick open the horse box and escape,by Paul AQrchard. There was a ghostly projection of a woman on the wall. dim lightbulbs, films and paintings. Martin Sexton, who I met at the No More Grey Gallery, had a piece called "The Levitation of John the Baptist", which was a very realistic minature head floating in a cabinet decorated with angels and other symbols. 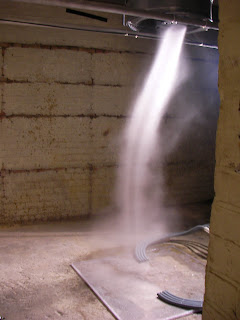 The Riflemaker Gallery had a show at the Rochelle school,"The Glass Onion Shop" and had a range of work including a participation painting by Yoko Ono, which had a box of paints next to it and when I was there someone was busy adding their own bit to the painting.
PSJM had some light box works using famous brands logos and the words "Made by Slaves for Free People" which I thought were very clever. 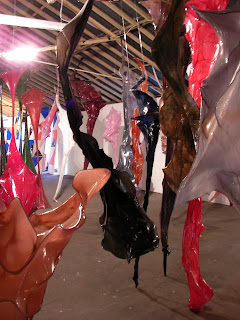 Hanging from the ceiling were strange forms, rather like chrysalis or cocoons, while Anabelle Moreau showed large curved panels with beautiful coloured surfaces. The space was surprising considering it was an old school building, Rochelle school, maybe this is a way forward for schools, incorporating galleries. 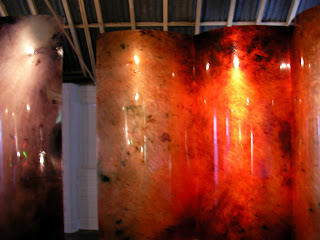 Posted by Padmayogini - Wendy Le Ber at 11:46 am No comments: