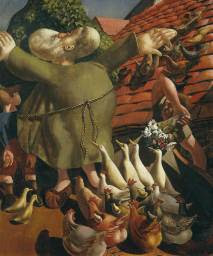 Ruth and I went out on a day trip to Cookham this week. I had wanted to go for a while as I really respond to some of Stanley Spencer's work. There are special deals on train fares too which make it easier to travel. 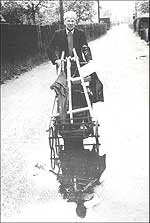 It was really hot but fortunately overcast for the early part of the day, otherwise I don't think I'd have managed. Though not many signs, we walked down what seemed to be the only road, past the house where Spencer used to live, to the Stanley Spencer gallery, a lovely small but well packed space. 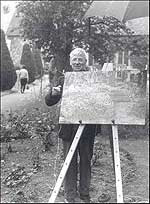 It was great to see some of his first wife, Hilda's work too. Really sensitive portrait of Spencer, her daughter and drawings too. Spencer's last unfinnished painting, Christ Preaching at Cookham Regatta, shows how he painted: working on a squared up canvas, pencil outlines of t 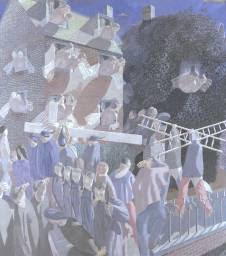 he composition and then detailed painting in sections of the painting itself. That was a surprise, no underpainting, and the completeness of small sections and only drawn sections in the painting.

I think I respond to his desire to set the spiritual, in his case Christianity in the everyday world around him. That he had the confidence to set his visions of biblical stories in Cookham itself.

We spotted a number of birds of prey while we were there.at one point seven near the train station, only one track, we found out later these at least were red kites. Lovely to see them and here their piercing slightly mournful cries.
Posted by Padmayogini - Wendy Le Ber at 1:42 pm No comments: 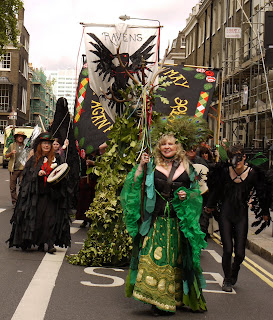 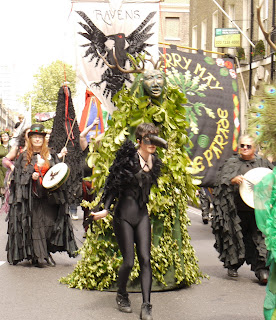 The Leytonstone Art Trail starts from 24th July till the first of August I have a piece of work with the 100sqft exhibition which is being held at the Luna Lounge 7, church lane. The 100sqft. The 100 pieces of work are prints along side Carne Griffith's work in the Luna Lounge and the Launch of the main 100sqft exhibition is on August 1st at the Cholmeley Boy's Club, Dalston.

I have put in one of my images from the Beltane parade, it's a series I would like to show in an exhibition later.

The Leytonstone Art Trail has been growing year on year along with the Leytonstone Festival. which runs from 15th July till 25th July. I am having a art/craft stall at the Henry Reynolds Garden this Sunday 18th and in the town centre next Saturday 24th July.
Posted by Padmayogini - Wendy Le Ber at 3:26 pm No comments: 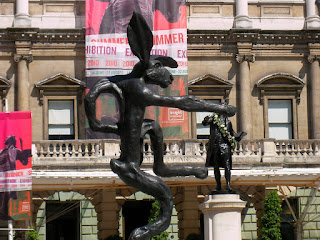 Ruth and I went to see the Summer Exhibition at the Royal Academy, these hare sculptures are the installation outside.
I like to go each year, though I haven't entered work there for some time. I like to see what's been chosen, it is so subjective, the choices made by invited artists in some rooms as well as the work chosen from the public submissions. 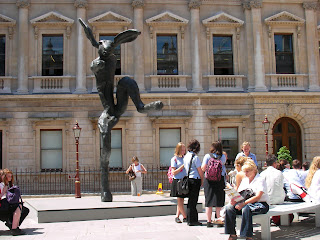 This year a lot of the work chosen from the public seemed more traditional, which was interesting.
There were a lot of more English colours, muted in tone and work that could have been produced a century ago or more. Not that this was a bad thing, just a bit surprising, as the RA had been going more modern recently.

In room 7 David Mach had a huge intricate collage that I really liked and in the large Weston room were a number of artists books exhibited for the first time. I was pleased to see the books and that the RA is promoting them too.
Posted by Padmayogini - Wendy Le Ber at 1:28 pm No comments: 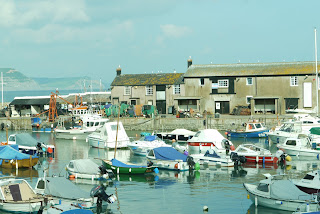 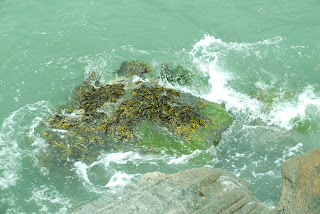 Ruth and I went down to Lyme Regis for a few days, the weather was a mixture of strong winds, sun and clouds. We went on one of 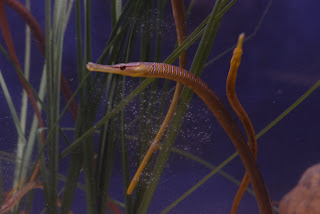 the fossil walks and found lots of fossils, mostly pieces but one good dinosaur vertibrae too. There was a tiny aquarium on in the harbour and these pipe fish moving in a graceful dance.

I love the sea air and the expanse of sea and sky, the sea is a real turqouise colour too.There is a great little harbour and boats and the cobb, which we walked along out in the sea. We took photos, did some sketching and enjoyed the fresh salty air. 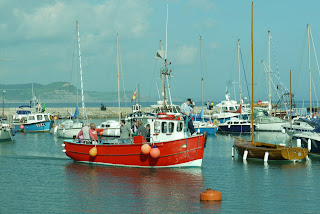 Posted by Padmayogini - Wendy Le Ber at 2:45 pm No comments: