I've found a newish gallery/museum at Spitalfields, called Kinetica www.kinetica-museum.org It's outside the old Spitalfield market, with all the new buildings that have been developed there. I think loosing a substantial part of the market, for expensive shops and eating places it is a great loss to the community, so Kinetica is a bonus.
The exhibition was Luminaries & Visionaries, coloured discs rotated and spun, an innovative and beautiful clock marked off time by illuminating symbols and plant forms. Images moved across boards of electronic lights, pendulums traced patterns of light, slowly fading away, and strange sculptural heads mouthed words like peace. 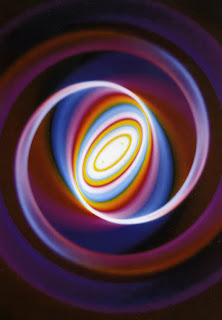 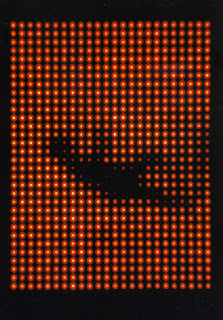 I have been increasingly drawn to artists working with colour and light and start thinking about how I can work more in this way.
Our Colour Wisdom day went very well,ideas were explored, people explored their response to colour and some lovely coloured work was produced. The practise of colour breathing went well to, giving us another way to experience colour and it's effects on the chakra system. 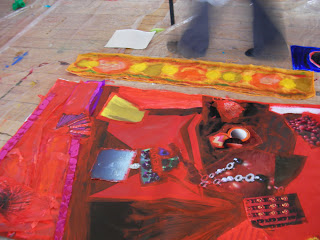 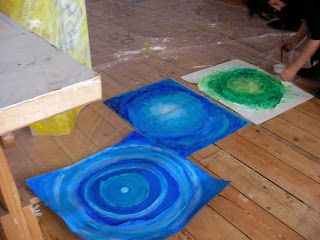 More pictures and comments will be on my main site soon.
Posted by Padmayogini - Wendy Le Ber at 8:33 pm No comments: 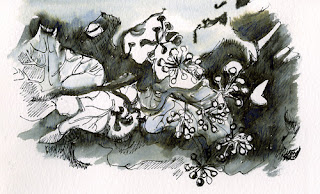 I went to a very good talk by the artist Thomas Hirschhorn, at the South Bank as part of their 100 ideas event. Hirschhorn was talking about his project,The Musee Precaire Albinet, which was a temporary museum in a social housing project on the outskirts of Paris.

The project, Hirschhorn called it an Intervention, was over 18 months in preparation, mostly because the artist wanted to borrow works of art from the Pompidou Centre. This amazingly happened in the end and work by artists such as Mondrian, Dali and Warhol went on show, in a programme lasting 8 weeks. The original works were very important to this project because they posses a power, and for Hirschhorn, just a moment of real engagement in front of such a work can be enough.

The community were part of the whole event and there was a range of activities every day including a shared meal on Sundays. Hirschhorn uses everyday materials in his work, plastic, felt pens, cardboard etc and he spoke about the importance of temporary art works, the precarious nature of work, that gave it it's edge. It was something about anything is possible in the moment if I am awake and aware.

I really responded to his insistence that art was a potential force for change, but that it should not be in service to governments, social services, or regeneration projects. He said in 2004 about this work that " I am an artist, not a social worker. Le Musee Precaire Albinet is a work of art, it is not a sociocultural project. This affirmation is that art only as art can obtain true importance and have political meaning."

The other event I have been to is one about artist's diaries at Tate Modern, I am working on a diary of my own to take in on Saturday the second part of the event. It was good to see examples of artist's work, mostly photographic in this instance, I came away with lots of ideas.

Some more photographs came back this week, and I have a new collection for my art cards. Marketing them is slow, I need a plan I think. One of the films was in black and white, I don't usually work in black and white so it was interesting seeing the results. 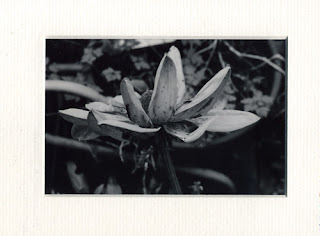 A couple of images, a little pen and ink of the Ivy and one of the black and white photos.
Posted by Padmayogini - Wendy Le Ber at 4:13 pm No comments: