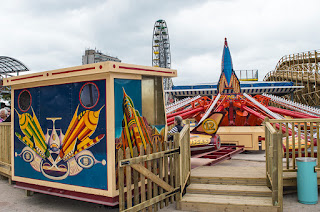 Ruth and I had tickets for the first day of opening at Dreamland. I had heard on the news that the Scenic Railway wasn't finished which was a shame, but I was more interested in seeing the site and the vintage rides. I like the old signage and paintings on the rides as well as some of the old cars and jets on the rides. Dreamland website here 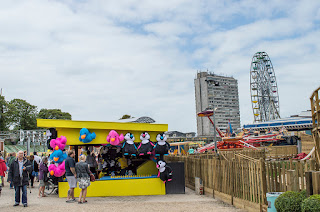 The weather brightened up fortunately as we walked down, The original entrance was open down by the cinema, which still awaits it's restoration. A shop at the entrance and loads of staff everywhere. I must think of what might be good to sell there. 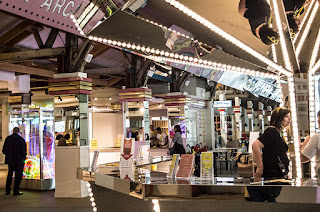 There is an indoor section with pinball and other arcade games, which we didn't look at this time. I presume they are open to everyone as the ticket section was outside. There are other activities inside too, including a roller disco. 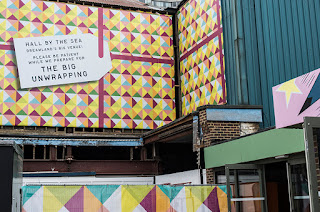 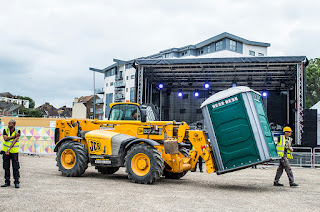 They were still opening up rides while we were there, and pieces of hedge and fences were being moved around. I didn't mind this slightly chaotic mood it added to the atmosphere of  anticipation and of being one of the first on the site. 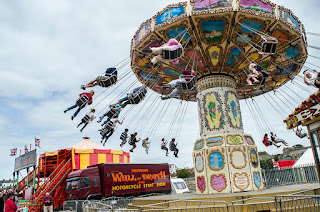 The chair o plane started up when we walked over, a 1970's classic Waveswinger, made it Germany and brought over from South Africa apparently. 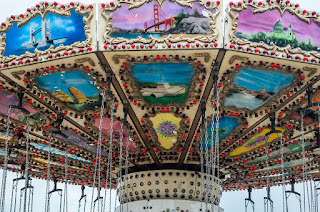 I liked the painted decorations around the ride and took photos of it as well as the rest of the site and rides. 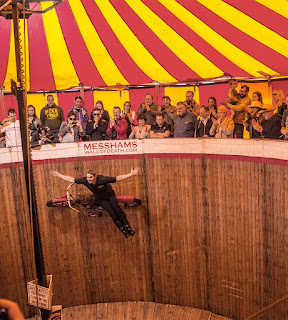 The Wall of Death had a showing which we were in time for, a wooden rickety feeling structure, where two rows of us looked down on the circular wooden track where two men rode their bikes round. In fact the bikes came right up to the top of the walls, very exciting to watch with the riders weaving around doing acrobatic moves as the walls vibrated with the noise of the engines.

I wasn't close enough for taking good photos, but enjoyed the performance. 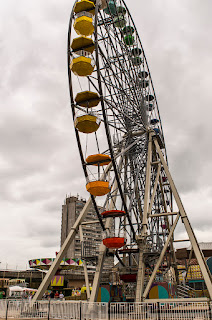 The Helter Skelter and Hurricane Jets were being well used. I really like the jets, 1950's ride with good decorations.  Little ones were getting ready to pedal the Dream Cars, little vintage cars on a track. But the Big Wheel, and Double Decker weren't open, nor quite a few other rides, which was a shame, but I knew we would get free tickets for another visit.

Posted by Padmayogini - Wendy Le Ber at 7:11 pm No comments: 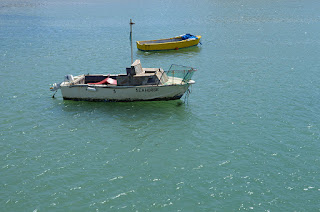 I've been down to the sea front and harbour, taking photographs and doing some sketches.
The colours in the sea have been beautiful this week. 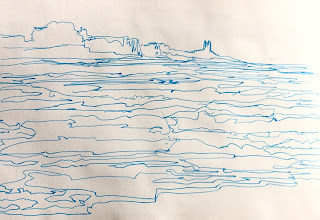 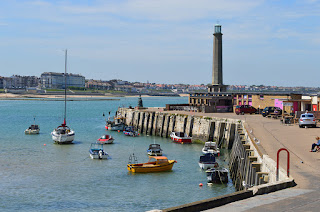 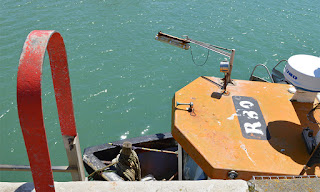 I've been using up paint from my palette to cover some of my sketchbook pages with tones of blue and using white pen to draw on top of it. I've also been following the contours of the waves in my drawings and water colour sketches. 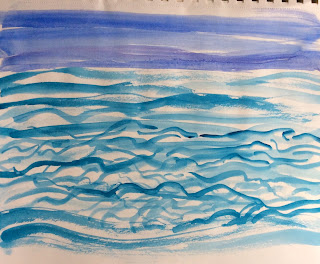 I like the effect of this and will paint a few more sheets with different shades of blue to work on. 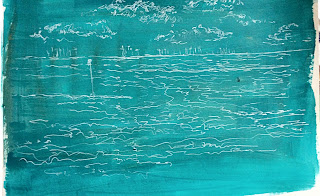 Posted by Padmayogini - Wendy Le Ber at 7:10 pm No comments: