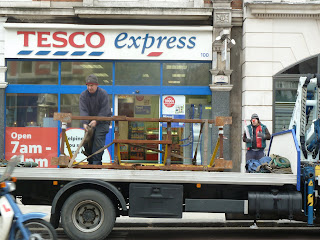 I have managed to follow all but 2 sets of instructions. It is quite challenging keeping the instruction in mind and finding an image to fit the brief. This is the last image with others from the group I uploaded to Instruction #26
"If you're not sure it's a picture, shoot it anyway" - Carolyn Drake It is a picture of the Anarchists on the day of the TUC march and protests about the Government cuts. 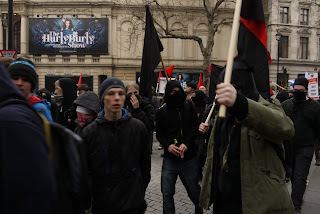 I have been really enjoying the challange and the community of photographers that has grown up around the project. I am learning a lot about Street Photography and seeing some really great images.There have been many discussions on line, not least about what is Street Photography. There are plans for a possible exhibition which will be great if it comes off and there is a street photography festival coming to London in the summer. Link for the festival here 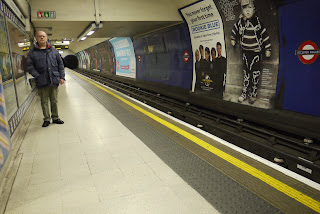 The photo above is from instruction 23 "There is a crack in everything - that's how the light gets in..." from 'Anthem' by Leonard Cohen - Frederic Lezmi

Here is the link to info about the project, you can join up any time and follow the instructions as and when you can each week.
Posted by Padmayogini - Wendy Le Ber at 10:19 am No comments:

TUC March and Day of Protest 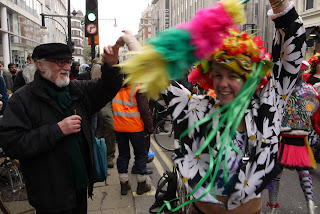 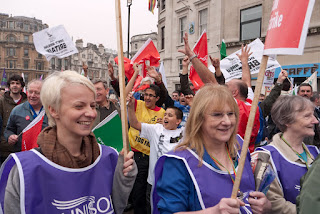 I was pleased to be able to get down to the march last Saturday and to cheer on and talk to some of the protesters as well as taking some photographs of the days events. The scale of the cuts is huge and we don't really know exactly whats going to happen yet, but the arts has just lost millions too and that even though as an industry it contributes far more to the economy than it recieves, 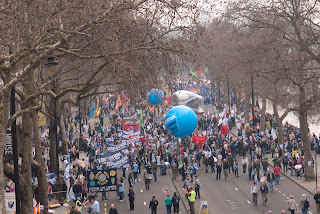 It certainly doesn't make sense, so sadly it leaves us with the clash of ideologies about what society is about. 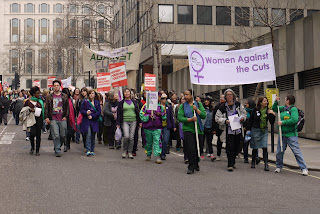 When I first arrived at the gathering of the march I went over to where the womens block were assembling, at the Royal Courts of Justice. Just over the road were a group of retired Gurkha soldiers and their wives and family members. They were joining the march to protest about the cuts to legal aid funding. Some of the old soldiers started singing and dancing as they waited, a really great group of people. 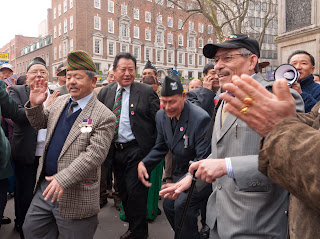 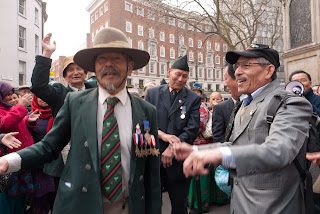 The march was already filling the embankment as I walked down, it was increadible to see the scale of the protests, now thought to be over half a million people. As I walked over to the Southbank people were still streaming in to join in the march banners and flags flying. 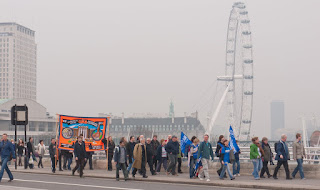 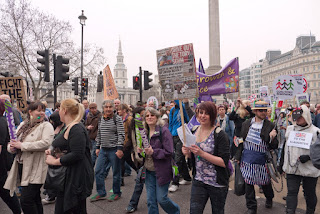 I joined the start of the march at Trafalgar Square and was again struck by the size of the demonstration, it was nearly 4 hours to go past apparantly.I enjoyed some of the banners and placards and the good natured crowd, seeing the range of areas were there are cuts was sobering. There were a lot of people with disabilities on the march, lots of people in wheelchairs, families, all walks of life. 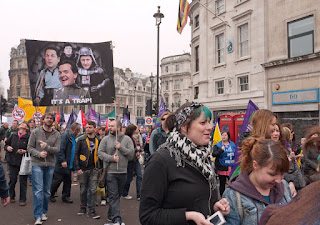 I left for Oxford Street where there was going to be some art protests and was on the street as the Anarchists ran past, smoke bombs, lots of masks, black and red flags and drums, quite an impression. Not wanting to get caught up with the police I carried on and made my way to BHS in Oxford street. 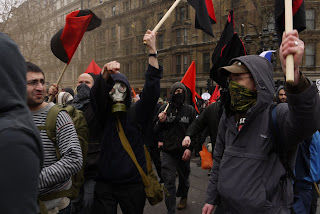 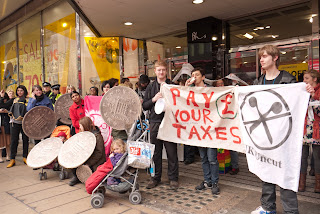 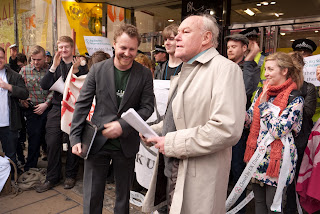 The police having been notified by reading the online info about UK Uncut's protests had police on all the doorways to the shops and busineses targetted, and mostof them were closed. As was BHS when I got there, but protesters were outside with banners and I was lucky to be at the front when the actor Timothy West read a new play with Dominic West, The Banker and His Son, very good. 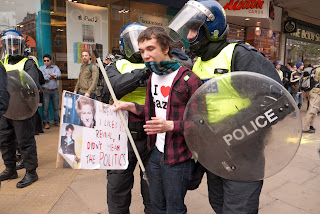 I didn't have a camera with enough memory for a long video unfortunately. The protest was blocking Oxford street of course and by this point and the road was closed off by police and the Riot police were moving in. As more protesters joined in the Riot police started blocking off the street. Not wanting to be kettled I moved off a little way, but they didn't stop anyone leaving.

A great theatre group, dressed as Robin Hood type characters danced and performed in front of the Riot police and then a group of young women with flower garlands and crowns of flowers started to weave in and out of the police saying they loved them. When they were getting up close and personal it was too much for the macho guys, they broke off and marched quickly down one of the side roads, much to the surprise and delight of the crowds, who were re claiming the streets. As I left there were groups of young people sitting in the middle of Oxford Street with food, music playing and people dancing. And yes Oxford Street is much better with out any traffic.
Posted by Padmayogini - Wendy Le Ber at 8:10 am No comments:

Egyptian Book of the Dead Exhibition 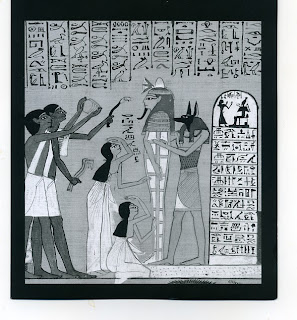 Just been out to see the exhibition of the Egyptian Book of the Dead at the British Museum before it closes in a few days time.

Really busy in the exhibition, slowly queuing to look at the work in the first few rooms, rather tired when I got to the final room, which was a shame because there were not many people there. 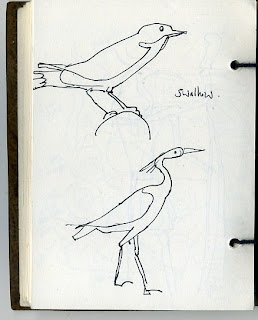 It was a moving and intense experience, I am always cagey about exhibitions involving spiritual practise and human burials. I think that remains like mummies should not be on display and returned to their homeland. There was one such mummified body as part of the exhibition, but the main features were the texts of the Egyptian rituals surrounding death.

Some beautifully illustrated texts that took my breath away, something about the power of such painting as part of a ritual and religious context that lead the work to have a power of communication. Visitors there were really paying attention to the texts and reading all the notes and small bits of translation.

Going through the rooms, the images started to add up, the patterns of the symbols repeated. I made quick sketches of some of the birds as I went round. 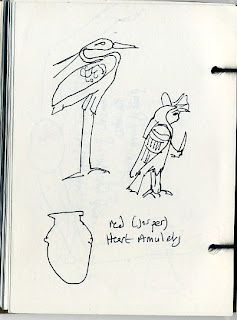 I started to have more of a sense of the connection between these Egyptian rituals and Buddhist rituals and even thought about the surviving Christian rituals of confession and the Last Rites, but generally here we have lost the rituals surrounding death. Glad I did make the exhibition though, I can see some of the symbols becoming part of my work.
Posted by Padmayogini - Wendy Le Ber at 9:16 pm No comments: