Radical Nature and the monks from Tashi Llumpo Monastery

I have been lucky to see the monks from the Tashi Llumpo monastery at St Ethelbergha's and at Asia House where we had a day to study and have a chance to practice some of the spiritual offerings they make,including torma and butter sculpture, sand mandalas and block printing.
The monks made a small peace sand mandala during the day and it was great to see that practise again, with the ritual prayers and music.

There is something very moving about their work and it's a tragedy to think that it would be easier for me to go to Tibet now than any of the monks.

I also went along to the Barbicans Radical Nature exhibition, I am pleased that there seems to be more artists engaging with issues of ecology and the natural world, but the exhibition was a little bit of a disappointment. Perhaps because the exhibition had more in the way of video and installation, but it seemed rather bare.

I was struck by Mark Dions work, the little piece of travelling wilderness,"Wolf 2006" which was a stuffed wolf on a trailer. There was something powerful about the wolf even in it's preseved death. I watched most of CLUI's video of stills from photographing the Trans-Alaska Pipeline 2008" They are incredible images with some text charting the technical and engineering difficulties the construction of this longest oil pipeline in the US entailed.

The problem with video art is that you need to spend a long time watching them and when there are more than a couple in an exhibition it is hard to see much of them. A12 had a great idea, something I've thought about for some years myself, that of providing "zones of respite and contemplation within the built environment". They had built a small wooden structure that was mirrored on the inside, it was planted with grass and had a piece of topary and an urn full of ivy and maybe box. You could step inside and see the minature garden reflected around you.

Perhaps the pathos in the whole exhibition was that most of the plant life inside was not doing well, the Barbican is a really dark building in general and plants need light. Maybe that was an intentional part of the exhibition.
Posted by Padmayogini - Wendy Le Ber at 5:15 pm No comments:

Per Kirkeby at Tate Modern and Hampton Court show. 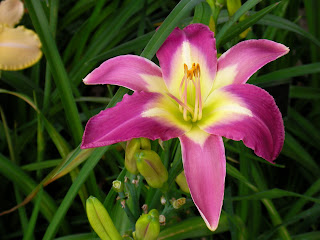 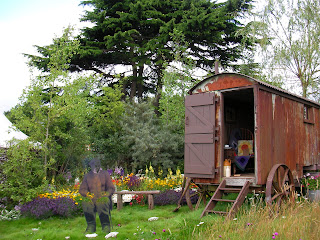 The Hampton Court Flower Show was on last week and I was there again with my sister, trying out my new camera and enjoying the show. Generally Hampton Court Show feels more spacious than Chelsea Flower show, but this year Hampton Court seemed very busy, which was fine until I had my handy cart filled with bargain priced plants.

The perfume and colour of the plants is what draws me time and time again. It is like being awash with beautiful sensations and the sheer variety of plant forms is staggering. From the same basic elements and earth, water and sun, we find all the richness of the plant kingdom.

I have also been to see the exhibition of Per Kirkeby at Tate Modern, I didn't know his work before but was really pleased to see it here at the exhibition. There were a number of his collages that inspired me, using images from the natural world, torn papers and real leaves. 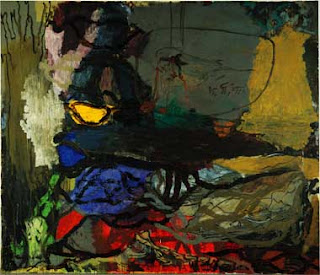 His blackboard paintings hinted at lost histories of work rubbed out and his small bronze sculptures were earthy and powerful. In the last room were some great oil paintings on canvas, his "Soft Lapping of Waves Green" was lyrical and as the name implies full of green tones. Other large paintings, untitled, had reference to his geological interests, layers of formations and abstact shapes.
Posted by Padmayogini - Wendy Le Ber at 4:31 pm No comments: 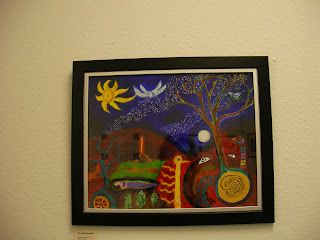 My painting," The Call of the Soul" above is on show at the annual Leytonstone Festival and Art trail which is running at the moment. I have a piece in the Waltham Forest Arts Club group show in the One Stop shop and was part of the E17 designers craft fair in the library at the weekend.

In the One Stop shop,I really liked Martin Adam's piece ."Water lily" a lovely elegant and pure form. Shirley Pountney has a great relief painting on handmade paper using the symbolism of the temple. I enjoyed Roan Allen 's pieces using cows too.


The old Woolworths shop in Leytonstone has been taken over by a large group of local artists for the Art Trail called Pic and Mix and It was great to see the large space being used for something creative. I couldn't help but think how good it would be if the council had the foresight to help develop the space into something vibrant and creative long term. Quite a number of the artists re-used items left behind in the shop or made work in response to the site. 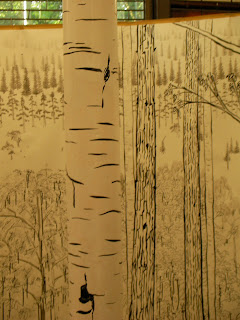 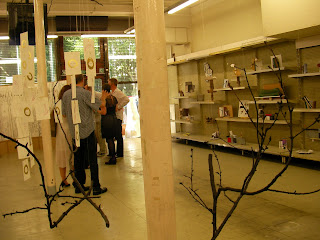 The creative use of old plastic buckets as lamps made me smile and around the exhibition were a number of really interesting pieces. The exhibitions are running over the next two weeks. 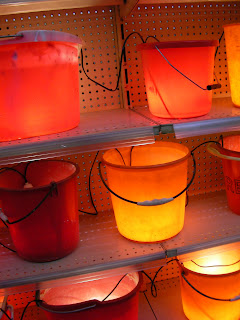 Posted by Padmayogini - Wendy Le Ber at 4:07 pm No comments: